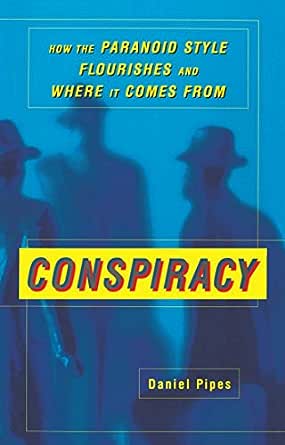 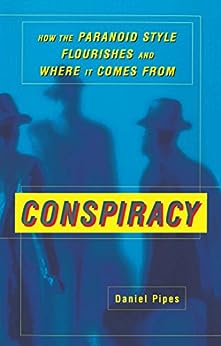 Conspiracy: How the Paranoid Style Flourishes and Where It Comes From Kindle Edition

Anglian Traveller
5.0 out of 5 stars Daniel Pipes on the real dangers that result from belief in conspiracy theories
Reviewed in the United Kingdom on 11 March 2013
Verified Purchase
Daniel Pipes is a senior lecturer at the University of Pennsylvania whose principal area of academic expertise is the politics of the Middle East.

In this much-quoted book, Pipes examines the origin and history of the `paranoid style' from the time of the Crusades 1,000 years ago through to 1997 when the book was published. A distinction is drawn between conspiracies, which are real, and conspiracy theories, which exist only in the imagination. Richard Grenier is quoted in the first chapter to help define the territory: "conspiracy theory is the sophistication of the ignorant".

Converging themes characterise Pipes' essay. The first is that virtually all conspiracy theories derive from two parallel European traditions: anti-Semitism, and a manufactured suspicion of `secret societies' like the Freemasons, Templars and Adam Weishaupt's `Bavarian Illuminati' - a group of provincial intellectuals in southern Germany in existence for only 12 years in the late 1700s, kept alive to this day in the fevered minds of conspiracy theorists as if they were still real. These dual strands of 1) Jew-hating and 2) paranoia about `secret societies' have pursued separate development tracks, but occasionally intertwine. Together they are responsible for the `paranoid style' which has been exported from Europe in the past two centuries along with industrial technological know-how and political ideas like democracy.

The book is an informed academic treatise full of enlightening historical detail, such as the precise history and development of freemasonry from the guilds of the middle ages and how, where and when fabrications about the motives of members originate - for instance the so-called '33 degrees of Scottish Freemasonry' turns out to be a fantasy dreamed up in France during the revolution to scapegoat `masonic conspirators' for the revolution turning bad. In reality no such '33 degrees' exist, or ever have.

In chapter 3 the author lists some useful tools to differentiate between a genuine conspiracy and an illusory conspiracy theory. These include a knowledge of history and "an intuitive understanding of the way things don't happen", and recognising the distinct characteristics of CTs: their invariable reliance on forgeries (the Protocols of the Elders of Zion for example); internal inconsistencies; use of `overabundant learned factoids & pedantic references'; dismissing all contradictory evidence; a cavalier attitude towards facts, and oblivion to the passage of time. Finally and most importantly the conspiracy theorist's `dreary view of mankind' insists that power is the goal; wealth and the gratification of (invariably `perverted' or `monstrous') sexual appetites being the primary motivators - which obviously says more about the underlying psychological preoccupations of conspiracy theorists themselves than those of any fantasised `conspirators'.

"'Appearances deceive' is a passport to bad judgment. Conspiracism turns some of history's most powerless and abused people (Jews, freemasons) into the most powerful; the most benign governments in human experience (the British and American) into the most terrible. Fear of the harmless and benign makes conspiracists blind to totalitarians, so they see despotism in a New York think tank but not in Stalinist Russia" (p48).

The author then spends 3 chapters on tracing the historical development of the paranoid style. First from origins to 1815; then `fluorescence' up to 1945 during which period conspiracy theorists seized power in Germany and Russia to spread mayhem and destruction across the world. Finally `migration to the periphery' since 1945, where in Europe conspiracist ideologies are now discredited & condemned to the lunatic fringe, though the toxic life forms have found new fertile swamps to colonise in the Middle East and in the New World.

Pipes then examines how conspiracism has been deployed by `right-wing nuts and leftist sophisticates' in the USA in past decades. Often the same delusions about `secret power' are held by both ends of the political spectrum, but whereas the right's presentation tends to be crude, hate-filled and risible, the left's presentation of fundamentally similar ideas tends to be more intellectual and sophisticated.

Pipes' second main theme is the damage caused by belief in conspiracy theories, not merely by - to quote Kathryn Olmsted - "injecting toxins into the public discourse" but being directly responsible for mass murder and persecution on a scale unprecedented in human history. Hitler and Stalin, Mao and Pol Pot were all supreme champions of conspiracy theories, and their murderous persecutions directly attributable to their delusional paranoid beliefs. In the final chapter this theme is explored in detail:

"By reducing complex developments to a plot conspiracism obstructs an understanding of historical forces, shifts blame for all ills to outsiders...preventing an accurate assessment of causes and thereby prolonging problems. It causes people to fear and hate what does not harm them, while not fearing or hating what does harm them. It directs them to waste their attention on the irrelevant and ignore the significant" (p174)

A neglected area of study is also raised which the author confesses deserves a book on its own: that conspiracy theories are the origin of most actual conspiracies and not the other way round. Hitler used the fraudulent `Protocols' which concocted an imaginary Jewish plot for global dominance with masters and slaves, the creation of a global hegemon free of borders, the abolition of many nation states - to plan for precisely that, only ruled by his Nazi Party and the `Aryan Master Race'. Hitler admitted he owed the `Protocols' a great debt of gratitude for clarifying his vision of Third Reich global hegemony. The fraudulent conspiracy theory, in other words, was responsible for the initiation of a real one: the Nazi project in detail, plus the extermination of millions through industrial methods. Violence, extremism, wars and mass murder throughout the 20th century are all, ultimately, laid at the door of conspiracy theorists - especially in the USSR where Stalin's paranoid belief in conspiracy theories informed state policy to such a degree that he ended up having murdered 62 million people variously accused of `conspiring' against him, or of being `agents of imperialism'.

The author demonstrates that although the paranoid style has declined to the fringes in western societies (a decline observably slower in the USA than in Europe), it continues to flourish in the territories of the former USSR, in Japan and especially the Middle East where again, conspiracy theories about the scheming of `imperialism' and `zionism' being primarily responsible for the failure of Arab societies to flourish and prosper are used by cynical despotic rulers to deceive supine populations and divert their gaze from their own governments' corruption and ineptitude. Pipes was writing in 1997, prior to the `Arab Spring' movement so it's too early to say if a more healthy realism will finally kill off conspiracism as a guiding ideological framework for population control in the Middle East region. (The case of Robert Mugabe is a prime example which supports Pipes' thesis: his disastrously incompetent, despotic and kleptocratic regime has crippled Zimbabwe and reduced it over 30 years from being the leading economy in Africa to starvation and ruin. Like virtually all autocrats, he concocts a conspiracy theory to keep himself in power: that the self-made catastrophe in Zimbabwe is all the result of the `plotting of western imperialists' against him.)

Pipes' uncompromising stance on the lethal dangers of ideologically-driven conspiracist beliefs sets him apart from other writers in this field. For different perspectives I would recommend the work of Professor Michael Barkun on `improvisational millennialism'; of Kathryn Olmsted, whose 2009 book `Real Enemies' focuses on the US Government's intentionally manipulative use of conspiracy theories in the 20th century; the insightful but dry academic writings of Mark Fenster, and the liberal-leaning but lucid (and often witty) writings of UK academic Peter Knight. For a more light-hearted populist perspective as a balance to all this heavyweight academia, try David Aaronovitch's `Voodoo Histories.'

Then again, as good as Daniel Pipes is, I still prefer the shadow potential, as the perspective of what we and others actually see is far more convincing than the government's lame attempts to refute visual and (alternative) expert testimony. However, understand that I'm working from the perspective that governments are not to be trusted. If you have an alternative view to that, then Daniel's book is convincing.
Read more
Report abuse

Charles D. Hayes
5.0 out of 5 stars An outstanding exposition of conspiracy theory.
Reviewed in the United States on 25 June 1999
Verified Purchase
Pipes observes, "Every hate group has a conspiracy at the heart of its thinking." He goes on to explain how the "Right and Left engage in similar forms of conspiracism because they share much with each other-a temperament of hatred, a tendency toward violence, a suspiciousness that encourages conspiracism-and little with the political center." The best book I've read on the subject. Highly recommended.
Read more
24 people found this helpful
Report abuse

sarah
5.0 out of 5 stars It is my all time favorite book
Reviewed in the United States on 30 August 2013
Verified Purchase
Well written, learned so much about a topic that permeates our lives, especially when dealing with the Middle Eastern countries that are riddled with conspiracy theories, but this book takes you back through the years of how it got started and covers famed organizations like the Templars. I read this book twice and bought a few copies to give to friends.
Read more
3 people found this helpful
Report abuse
See all reviews
Get FREE delivery with Amazon Prime
Prime members enjoy FREE Delivery and exclusive access to movies, TV shows, music, Kindle e-books, Twitch Prime, and more.
> Get Started
Back to top
Get to Know Us
Make Money with Us
Let Us Help You
And don't forget:
© 1996-2020, Amazon.com, Inc. or its affiliates