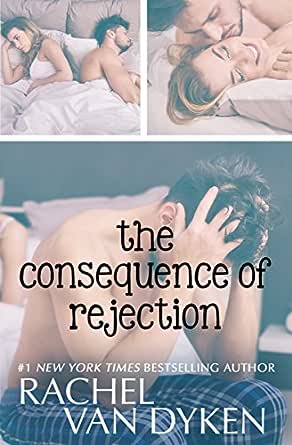 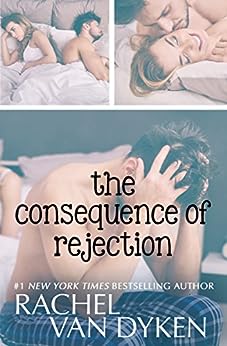 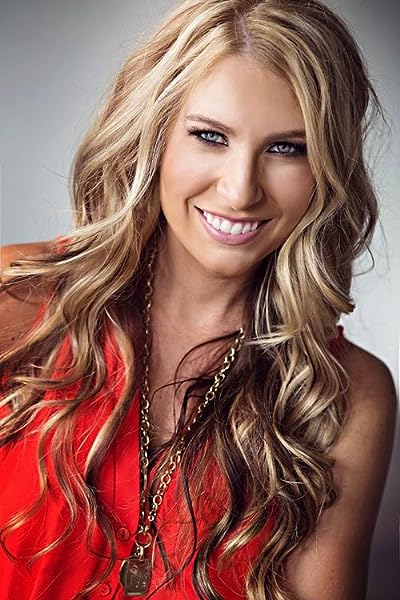 The Consequence of Rejection Kindle Edition

You know the universe is trying to tell you something when you get struck by lightning, but only after getting hit on by the elderly, almost getting run over by a semi, and running into the one who got away.
Why do they say it like that anyway?
Like I accidentally lost her when she was the one that got in the car with my best friend and left me.
The day after I proposed.
We were eighteen.
I wanted forever.
She didn't.
It's been ten years.
I tried to move on, tried to get married, had that same wedding crashed by my now best friend who says the only way for me to stop pissing off the universe, is to gain closure with the one woman I can't forget.
So I do it.
I embark on a journey down memory lane that not only lands me in prison but on the receiving end of a fist fight in front of the entire town, this naturally happens after drunken pool sex, climbing the same girl's window, and getting threatened at gunpoint by her father.
To say the universe is trying to tell me something anything, is a giant understatement.
I just hope I survive the message.
And then, I hope I survive her—again.

paddlefoot1397
TOP 10 REVIEWER
5.0 out of 5 stars My favourite in the series
27 March 2018
Format: Kindle EditionVerified Purchase
Yes! Jason's story is finally here, and the Consequences gang are all back together!

I wasn't sure how I was going to feel about the one who broke Jason's heart coming back. I was conflicted. I love a good second chance romance, but I hated what she did to him back in the day.

I shouldn't have worried, Ms Van Dyken brought things full circle with The Consequence of Rejection.

I laughed, I cried, I laughed some more. My heart hurt for Jason as he tries to find his way back to his love, and she frustrated me so much, the way she left him but expected him to just forget things. She still felt a little juvenile at times, but I guess that is because of the trip down memory lane.

My main man Max is back big time in story. Oh boy, he had me in stitches though I could completely understand how he could be annoying to those around him! When he, Colt, Reid and Jason are all together - well, you never know what is going to happen next!

And you never know what the consequences will be when you reconnect with your long lost love.

Thank you Ms Van Dyken for another wonderful new book.

I can't wait to see what comes next.

Amazon Customer
4.0 out of 5 stars Entertaining, humerous read
12 April 2018
Format: Kindle EditionVerified Purchase
While this is a standalone book, I think it really helps to have read the older Consequences books so you understand the grandma references and Max's chaos. Seems a bit lighter on in content than the earlier book but still well worth the time to read. Light- hearted read.
Read more
Helpful
Comment Report abuse

Jason never got over the fact that his high school sweetheart, one-and-only, woman he wanted forever with left him the day after he asked her to marry him. NOT ONLY LEFT HIM, but ran out of town with his supposed best friend... Now that Maddie is back he has to somehow reign in all the emotions that are ticking over and figure out how to stop the Universe being so mad at him. Between old lady Ethel, the door of his truck being ripped off, and being struck by lightning it's only a matter of time before the Universe puts an end to him. Unfortunately for Jason, his NOT best-friend Max is determined as only Max can be to set things right with the Universe.

Maddie hated having to move back home but the situation necessitated it. Working as a waitress and having to wait on her ex-fiancé and love of her life while he is out to dinner with a much older woman, weird and depressing. Finding out how badly she hurt him, sad and yet hopeful. Her fear caused her to run all those years ago but she isn't going to be afraid anymore. Unless it is lightning because with Jason's luck, it could strike twice.

Hilarious and emotional at just the right balance. Well-paced and well-written (as always) I absolutely adored this story. Told in dual POV, complete story with HEA. Enjoy!

Megan Chambers
TOP 500 REVIEWER
5.0 out of 5 stars 5 Stars
27 March 2018
Format: Kindle Edition
Holy wow. What an intense ride that was. This was my first in the Consequences series, but I definitely want to go back and read all the others.

Right from the start I was hooked. I literally read this in a couple of hours. The level of intensity in this book was so high. I just had to know what was going to happen. Even though there were tiny little parts where I think I would’ve picked up on which characters belonged where, had I read the previous books first, I had no trouble understanding the storyline of this one.

I’m not entirely sure that I really liked either Maddy or Jason, and Max just plain drove me nuts half the time, but this story was so unputdownable it isn’t funny. I was determined to see what happened and ride the highs and lows. It was like a constant state of angst.

I felt the ending was a little rushed, I would’ve liked a bit more closure, but it was all rounded out quite well otherwise.

Go to Amazon.com to see all 277 reviews 4.5 out of 5 stars
Get FREE delivery with Amazon Prime
Prime members enjoy FREE Delivery and exclusive access to movies, TV shows, music, Kindle e-books, Twitch Prime, and more.
> Get Started
Back to top
Get to Know Us
Make Money with Us
Let Us Help You
And don't forget:
© 1996-2020, Amazon.com, Inc. or its affiliates