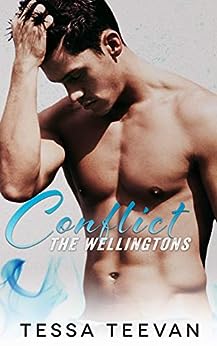 Carmen Rae
TOP 500 REVIEWER
4.0 out of 5 stars Love the Wellington way
Reviewed in Australia on 4 December 2018
I have been waiting for this book for what feels like forever and after reading it and beating myself up over the fact I couldn't remember any of the characters I checked on GoodReads and it turns out It's been 4 years. Which equates to around 1000 books since I put the last one down so I guess it's ok I was a little out of the loop.

That said I didn't need to remember anything to enjoy the story, I just felt like I was missing out on the inside jokes. But that might just be my Scorpio nosiness needing to know everything.

Any who back to the book. I love Tessa Teevan's writing style. Her characters are real and I especially loved that Shane was so genuine and said things that I normally expect to hear coming from my own husbands mouth.

Alyssa was awesome too. She started off a little shaky but by the end I loved her. She didn't need anyone to fight her battles or save her she just sorted it out in a no nonsense way and continued on with her day.

The only downside is I now have a massive urge to do a series re-read to see if the story gets better with the other books still fresh in my mind but with over 2000 books on my TBR I think it might have to wait for the next book in the series.

Dana Hoffman
4.0 out of 5 stars 3.75 stars
Reviewed in the United States on 4 December 2018
Verified Purchase
This was my first read by this author and it definitely made me want to read the previous books in the series. It revolves around Alyssa and Shane. They meet by chance, but they are, unbeknownst to them, connected on a professional level. That is a problem due to her working for a company that’s competing against the company that he runs. Their interactions were cute, funny and hot. I enjoyed reading their love story and made me curious about the other couples portrayed in it.

With all that being said, I have to mention that I was completely confused by the timeline set here. The entire story takes place over the course of almost a year, but it feels like it’s a week. It was very weird how it jumped all of a sudden and we were six months later than we were in the previous chapter. I have no idea how that happened, felt like a twilight zone type of situation. Also, Alyssa’s age changed at some point. She had been 25 for the longest time, then she was 24. And there were a couple of situations that were not consistent throughout the book, like, for example, how Alyssa ended up with Shane’s phone number. First it was said that she had gotten it from her coworker/friend, but later the story changed to her having gotten it from somebody else. So there were things like that which sort of sidetracked me from the actual storyline. It had a lot of potential to be a 5 Star read easily, but I still wouldn’t skip it 🙂
Read more
One person found this helpful
Report abuse
See all reviews
Back to top
Get to Know Us
Make Money with Us
Let Us Help You
And don't forget:
© 1996-2021, Amazon.com, Inc. or its affiliates