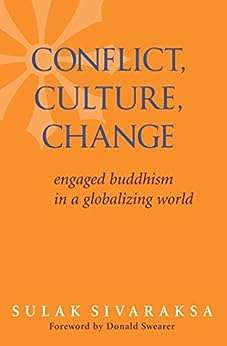 "Sulak Sivaraksa has set an admirable example of the relevance of Buddhism in the contemporary world."--His Holiness the Dalai Lama

"Sulak Sivaraksa is a bodhisattva who devotes all of his energies to helping others."--Thich Nhat Hanh, author of The Miracle of Mindfulness

"An irrepressible campaigner for a sane and just society, Sulak unites the strengths of a traditional Dharmic sensibility with the critical rigor of a Western-educated intellectual. His life offers an heroic example of engaged Buddhism in practice."--Stephen Batchelor, author of Buddhism Without Beliefs

"Like Gandhi, Sulak offers great inspiration to a civilization that has lost its way."--Jack Kornfield, author of After the Ecstasy, the Laundry

"Sulak is one of the heroes of our time, offering us deep wisdom and refreshingly sane alternatives to the Earth-destroying religions of consumerism, greed, and exploitation."--Joanna Macy, author of World As Lover, World As Self

"Conflict, Culture, Change is a collection of essays, which give one a good idea of the author's breadth of knowledge and depth of understanding, as well as his wonderful ability to apply the ancient teachings of the Buddha to the practical problems of our modern society. Not surprisingly, the book begins with a consideration of the role of nonviolence in a world riddled with conflict of one kind or another. Next he addresses the enduring issue of racial and cultural reconciliation, arguing that reconciliation is not merely about forgiveness and compensation. Sulak Sivaraksa also has many sound insights into the virtues of simplicity, humility, and compassion without which our world cannot survive. One essay focuses on the connection between Buddhism and Environmentalism, for which the author himself has been a vigorous spokesman. This small volume has a punch all its own: It speaks with integrity."--Georg Feuerstein, Traditional Yoga Studies Interactive --This text refers to an alternate kindle_edition edition.

Sulak Sivaraksa has been nominated for the Nobel Peace Prize and received the Right Livelihood Award and the Gandhi Millennium Award. He is the founder of the International Network of Engaged Buddhists and more than a dozen other international organizations. Born in 1933, the year Thailand emerged from absolute monarchy into democracy, his life has been intimately bound up with Southeast Asia's modern history. He was a Buddhist monk for two years, and then completed his higher education in Great Britain, where he also worked as a writer and commentator for the BBC. He is the intellectual voice of his generation in Asia, best known for his indefatigable efforts to bring people together into community, common work, and a shared vision of a more enlightened world. Sulak is author of Seeds of Peace: A Buddhist Vision for Renewing Society and more than 100 other books and monographs. He lives in Thailand.

Donald K. Swearer is the Charles and Harriet Cox McDowell Emeritus Professor of Religion, Swarthmore College. From 2004 to 2010, he served as director of the Center for the Study of World Religions at Harvard Divinity School. Although he has taught widely in the field of Asian and comparative religions, his research has focused on Theravada Buddhism in Southeast Asia, especially in Thailand. His recent monographs in that field include:The Buddhist World of Southeast Asia, Becoming the Buddha: The Ritual of Image Consecration in Thailand,The Sacred Mountains of Northern Thailand and Their Legends, and The Legend of Queen Cama: Bodhiramsi's Camadevivamsa, a Translation and Commentary. He currently lives in Claremont, California. --This text refers to an alternate kindle_edition edition.

Sudesh
5.0 out of 5 stars :
Reviewed in the United States on 6 October 2015
Verified Purchase
:)
Read more
Report abuse
See all reviews
Back to top
Get to Know Us
Make Money with Us
Let Us Help You
And don't forget:
© 1996-2021, Amazon.com, Inc. or its affiliates