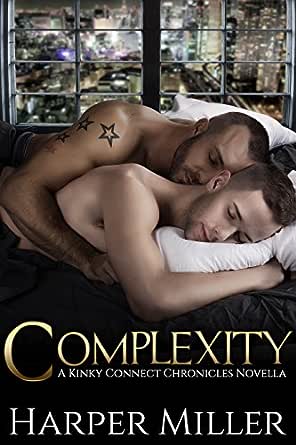 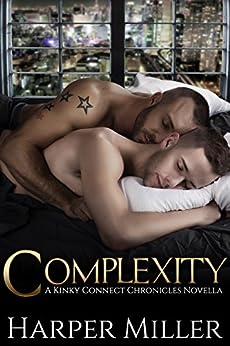 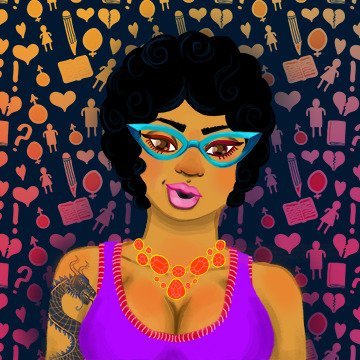 Harper Miller is a thirty-something native New Yorker. She's traveled the world and lived in a variety of places but always finds her way back to the Big Apple. A lackluster love life leaves time to explore new interests; for Harper it is writing. The Sweetest Taboo: An Unconventional Romance is her debut novel. In her mind, the perfect Alpha male possesses intellect, humor, and a kinky streak that rivals the size of California. When she isn't writing, Harper utilizes her graduate degree in the field of medical research. She enjoys fitness-related activities, drinking copious amounts of wine, and going on bad dates. --This text refers to the paperback edition.

M. Berens
3.0 out of 5 stars Unique Biracial LGBT Romance
Reviewed in Australia on 25 July 2016
Complexity is a M/M novella, but it is also a biracial romance and to some extent a bisexual romance, making it very unique indeed. I had a hard time getting into the story at first, but then the plot picked up and held my attention.

The main character, Manny (a personal trainer), was complex and well developed, but I felt like his love interest, Chris (a famous actor), was not as fleshed out as I would have liked. What I did see of Chris I really liked. What he did and said at the end of the book melted my heart! Manny, on the other hand, I wanted to shake many times, and I'm not generally a violent person. The relationship between Manny and Chris was well written, and the intimate scenes between them were intense and vivid. I liked seeing their relationship develop and blossom.

Complexity was the first book that I have read by Harper Miller. Although I like M/M romances and appreciated the unique biracial romance, it was not my cup of tea. I had a difficult time wading through all the informal speech Manny used like "tryna" and "gonna," which distracted me from the plot. Also, despite the disclaimer of "no cliffhangers" in the book description, the novella did have a sort of cliffhanger. The end of the book, the epilogue, is only online at the author's website.

Monika
3.0 out of 5 stars Liked it
Reviewed in Australia on 31 July 2016
It's my first book by Harper Miller, and I can guarantee you that I'd be happy to read more of her books in the future.

Complexity is my second m/m romance book I've read. It's a slow build up but worth it though.

I liked the characters together. Both Manny and Chris are loveable in their own ways. Their relationship was intense which I liked a lot.

Amazon Customer
3.0 out of 5 stars A good read
Reviewed in Canada on 1 August 2016
Verified Purchase
Another good read from Harper Miller. Of the four in the Chronicle series this one is not my favourite but it's still good. Recommend.
Read more
Report abuse

Felicia Denise
5.0 out of 5 stars Defining Moments
Reviewed in the United States on 16 July 2016
Verified Purchase
This quick read packs a powerful punch!

Emmanuel ‘Manny’ Acosta has come to terms with who he is and is sick of labels. Is he Hispanic or Latino? Does it matter? Is he bi or gay? He likes women and men…who cares? But Manny knows unfortunately, people do care, and he has come out only to a very few people closest to him. Considering his culture, neighborhood, and even his line of work, life could be very different for Manny if more people knew, and not in a good way.

But Manny is getting tired of quick, meaningless, nameless hookups. Well past thirty, most of his friends are busy ‘adulting’ with families. A personal trainer, Manny is working towards his dream of owning a gym. But he’s still alone. Although he doesn’t believe it’s in the cards for him, Manny is looking for his LEGO – that one person meant for him, to stick with him no matter what.

What begins as a simple internet hookup leads Manny to Chris, and drama he doesn’t want, a relationship he doesn’t think he can handle…and a man he wants more than anything. Manny pulls away after a misunderstanding. When Chris confronts him, the two men make up and admit their true feelings for each other. Manny is settling into what feels like happiness, when he’s gob smacked by one more admission from Chris. While Manny is ‘partially’ out, Chris isn’t out at all and doesn’t intend to change that. Having to choose between Manny and his career, Chris walks away, and Manny is devastated.

I loved, loved, loved Manny! He had such a gritty, honest feel. He didn’t mince words or pretty things up. He was honest to a fault, especially about himself and who he was. When he called himself an ‘emotional retard’ I LITERALLY laughed out loud and almost dropped my Kindle. Manny has several moments like that during the story. He’s deep in thought or in a conversation with someone else, and the things that come out of his mouth!!! LOL! Priceless! Manny’s pain and frustration are also more than evident, and as he hurts and tries to navigate through his anguish, I was right there with him, virtually patting him on the back saying, “Aye Papi! Va a estar bien!”

I had ‘some’ sympathy for Chris. I can’t imagine having to live as he did, but after a while, I was looking for the exit – his self-pity party was working every nerve I had. I was in total agreement with Manny that Chris’ concerns were for Chris…period. But there’s comeuppance for every cynic, and Chris gave me mine…and sat me in the corner…when he showed exactly what he was made of. I always try to stay away from spoilers, so let’s just say this story has the BEST GRAND ROMANTIC GESTURE I’ve read in ANY romance in YEARS! Kudos to the author for “bringing it!”

This is a definite must-read for anyone who loves the journey to love.

amazon143er
4.0 out of 5 stars A look at truths, sacrifices, and wants
Reviewed in the United States on 6 March 2017
Verified Purchase
I can't get enough of Harper Miller's Kinky Connect Chronicles where people meet online and hook up. Complexity takes an intricate look at not only being gay, but being involved as an interracial couple and a couple that is financially disproportionate.

This book gets complex really quick. The main characters, Puerto Rican born and personal trainer Emmanuel "Manny" Acosta and Caucasian high profile actor Christopher Kaine have a lot at stake if the world knew they were a couple however some members of Manny's family knew he was bisexual whereas no one knew Christopher was gay which later would cause a problem for Manny which is like the pot calling the kettle black.

I liked the different layers Complexity brought out and how the storyline allowed the characters to discover themselves. When fear is put aside a whole new world is opened up and possiblies are explored and I felt this is what happened for Chris.

Complexity is a look at truths, sacrifices, and wants. This book gets 4.5 I love you stars
Read more
Report abuse

Kindle Customer
5.0 out of 5 stars What a terrific read!!
Reviewed in the United States on 10 July 2016
Verified Purchase
Good golly! This was awesome. With a few strokes of the pen, in a handfull of pages, we get an amazing deeply emotional, funny tale about two guys, Manny and Chris. But Manny steals the show. The book has a very Santino Hassell vibe and I kept thinking of Raymond from Sunset Park (Five Boroughs, #2) by Santino Hassell as Manny spoke. Urban, funny, real relatable characters. Fantastic dialogue. And dirty, sexy and flaming hot smexy. Terrific perspective from out and proud bi guy. So many books throw in bisexual characters as a way to explain actions of the characters. Not here - Manny is not shy about who he is and I loved it!! Though we meet them late in the book, the secondary characters, moms, Juan, etc are well rounded. Her depiction of NYC is spot on. This is a new to me author and this may be her first MM. Now I know she has said these kinky chronicles are standalones, but please, please more of Chris and Manny. It can't end that way. I don't read many MF books anymore but might have to make an exception for Ms. Miller. Her writing is superb. Just hope, hope, hope she dips into the MM pool again.
Read more
One person found this helpful
Report abuse

ForTheReads
4.0 out of 5 stars Enjoyed
Reviewed in the United States on 15 October 2020
Verified Purchase
I really enjoyed this M/M read. The plot was amazing!

This story starts on a purely sexual relationship and blooms into a great emotional connection. I really enjoyed the growth of our characters throughout this novella.

The major reason I give this a 4 star instead of 5 star is because I wish the author gave us more closure in the ending.
Read more
Report abuse
See all reviews
Get FREE delivery with Amazon Prime
Prime members enjoy FREE Delivery and exclusive access to movies, TV shows, music, Kindle e-books, Twitch Prime, and more.
> Get Started
Back to top
Get to Know Us
Make Money with Us
Let Us Help You
And don't forget:
© 1996-2020, Amazon.com, Inc. or its affiliates