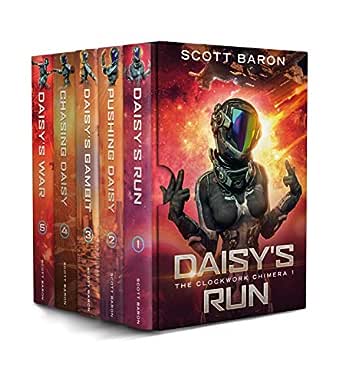 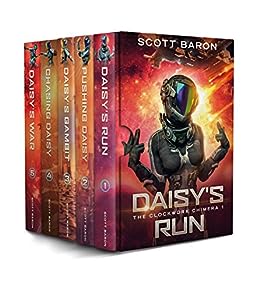 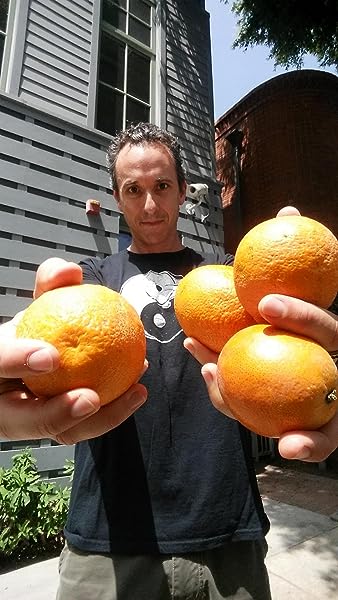 Yanked from cryo to join a crew of modded humans in deep space? Daisy's life just got a whole lot more complicated.

As if nearly blowing up on her way to Earth wasn't bad enough, Daisy had a whole mess of other trouble on her plate. Big trouble. And she was going to clean it off if it was the last thing she'd do... which it was looking like it very well might be.

Daisy had a simple rule for space travel. Don't blow up. So far she'd been managing to abide by that, but something was very much not right.

With the powerful AI supercomputer guiding the craft beginning to show some disconcerting quirks of its own, and its unsettling cyborg assistant nosing into her affairs, Daisy’s unease was rapidly growing, as was her bigotry toward artificially intelligent beings. Add to the mix a crew of mechanically-enhanced humans, any one of whom she suspected might not be what they seemed, and Daisy found herself with a sense of pending dread tickling the periphery of her mind.

Something was very much not right––she could feel it in her bones. The tricky part now was going to be overcoming her biases and figuring out what the threat was, before it could manifest from a mere sinking feeling in her gut into a potentially deadly reality.

Only things were far different and far worse than she could ever have imagined, forcing her to repeatedly adjust and overcome a reality that turned out to be far from what it had originally seemed.

The complete series set of all five of the Clockwork Chimera books:

Carol Kanthan
5.0 out of 5 stars The Complete Clockwork Chimera Saga: Books 1-5 of the Epic Female Protagonist Space Opera Adventure Series (The Clockwork Chimera Book 6).
Reviewed in Australia on 20 October 2019
Format: Kindle EditionVerified Purchase
Great series! I enjoyed every bit of the story and loved the protagonist Daisy. The series was cleverly written and ended as I thought it would.
Read more
Helpful
Comment Report abuse

Timothy Budden
5.0 out of 5 stars Science Fiction with twists and bite.
Reviewed in Australia on 3 November 2019
Format: Kindle EditionVerified Purchase
This series has lots of twists and turns and science fiction, one of his other starts out with fantasy and meets up with this one - I don't know where its going as I'm only into the 3rd of 8 or 9 in that so still have a lot to look forward too.
Read more
Helpful
Comment Report abuse

Duncan M. Cairncross
4.0 out of 5 stars Excellent
Reviewed in Australia on 17 December 2019
Format: Kindle EditionVerified Purchase
Starts really well - gets a bit over full of itself towards the end but overall a good series
Read more
Helpful
Comment Report abuse

Seafury
5.0 out of 5 stars Entertaining read
Reviewed in Australia on 3 November 2019
Format: Kindle EditionVerified Purchase
Love the wit and the development of the characters. They felt real and it was a very engaging, entertaining read!
Read more
Helpful
Comment Report abuse

Nico Restal
3.0 out of 5 stars Great plot, a little editing would be good
Reviewed in Australia on 25 November 2019
Format: Kindle Edition
The plot was excellent, with small things foreshadowing what came later; very clever. I admit I almost stopped reading when Daisy got to earth because I loathe apocalyptic fiction, but the whole series was full of hope.

However the first book was the best written - did the author fail to get the later ones edited? Things that need attention:

1. Were the sequels posted somewhere chapter by chapter? I ask because we are constantly told what we already know, even things that happened in the previous chapter.

2. Basic physics. The computer and android tech is great, but check out simple Newtonian physics: spaceships with stalled engines don't float in space; they keep going at the same speed and direction. Someone going out an airlock will get further away from the ship at the speed they left at, but if the ship's not accelerating, they'll keep pace with it.

3. Epithets. Enough already with the epithets! Seriously, we don't have to be constantly told that an AI is brilliant, an arm made of nanites etc etc. Give out intelligence some respect. Plus, names are good. There's no confusion or disconnect with names instead of things like 'her nanite-armed sister'.

4. Said phobia - the unnecessary and irritating avoidance of the innocent and useful little word 'said'. 'Said' is almost invisible; alternatives are distracting and often very irritating.

5. What did Daisy (and Sara) look like? We get descriptions of other people, but come on, even the basics would have been good. I ended up imagining Daisy as black (and she rocked that way).

monte8888
5.0 out of 5 stars Great feel good sci-fi full of action and mind twists
Reviewed in Australia on 20 October 2019
Format: Kindle Edition
Just found Scott Baron and thoroughly enjoyed this series with “Daisy” and her extended family. Sorry it had to end but I’m sure something extra special will arise in the future.
Read more
Helpful
Comment Report abuse

Kindle Customer
5.0 out of 5 stars Fantastic!
Reviewed in Australia on 16 October 2019
Format: Kindle Edition
Daisy is a wonderful character. She is so strong, so determined, utterly sure that she knows what is right and willing to fight for it.
Read more
Helpful
Comment Report abuse
See all reviews from Australia

Mark Paterson
5.0 out of 5 stars An excellent sci-fi adventure
Reviewed in the United Kingdom on 19 November 2019
Format: Kindle EditionVerified Purchase
I don’t normally read sci-fi/space novels but this popped up in a recommended read list and I was intrigued. Let me tell you I’m very glad I did read it, the series had me hooked and whilst the first book is a little slow, the author had to take the time to develop the characters and the world they are inhabiting. The AI characters are brilliant and really make the story.
I’ve really enjoyed the whole set, some great twists and an extremely well thought out story line!

Rick David
5.0 out of 5 stars Worth the time
Reviewed in Canada on 27 February 2020
Format: Kindle EditionVerified Purchase
I found the stories to be compelling and interesting. It was hard to put down. Neww adventures continuously rolling by.
Read more
Helpful
Sending feedback...
Thank you for your feedback.
Sorry, we failed to record your vote. Please try again
Report abuse

Out West
5.0 out of 5 stars The "Look Inside" pulled me in.....great read, worth what I paid.
Reviewed in the United States on 13 January 2020
Format: Kindle EditionVerified Purchase
I found this complete set of kindle books on sale, and, after reading the "Look Inside" bit, got pulled into the story and immediately purchased, and read straight through [ even though I have an extensive list of kindle books to be read due to my tendency to watch for books on sale, and I usually try to follow a first-in, first-out system ;) ]. I usually read more romance oriented books, but I greatly enjoyed this set. It has a bit of romance, but is definitely more story driven, which is a good thing. Everyone is mostly more concerned with staying alive rather than getting bogged down in the emotional. I enjoyed getting to know the characters and would encourage the author to write more in this series to let us know what else happens to them and their progeny. My only disappointment was that, after following the story faithfully to the end, and putting up with Sarah's reluctance over a certain issue, we never learn what caused that reluctance. Don't want to put any spoilers in, so I won't be any more detailed, but I felt that Daisy and the reader were owed that much, especially when Daisy's life was such an open book in comparison, and such a big deal was made of the whole matter. I loved the ending but did feel that small bit of incompletion. Also, it was well edited and I don't remember seeing a single typo or misused word.
Read more
One person found this helpful
Helpful
Sending feedback...
Thank you for your feedback.
Sorry, we failed to record your vote. Please try again
Report abuse
Load more international reviews

Stuart Jay
5.0 out of 5 stars Most Impressive
Reviewed in the United States on 2 July 2019
Format: Kindle EditionVerified Purchase
I agree with the previous critic. While it took a few minutes to get into book #1, I was most impressed with the opening discussion between two AI machines. It seems that there are more and thinks being written about AI and Scott did an excellent job integrating that technology with a flat out great sci-phi set of novels. I would encourage anyone who is a believer in outer space travel and the future to read #1 as you will not put it down and will leap into #2,#3,#4 and then the final #5. Great work and keep them coming.
Read more
3 people found this helpful
Helpful
Sending feedback...
Thank you for your feedback.
Sorry, we failed to record your vote. Please try again
Report abuse

Brian L. Every
5.0 out of 5 stars Great read!
Reviewed in the United States on 4 March 2020
Format: Kindle EditionVerified Purchase
I first read the bad luck Charlie series and really enjoyed them, daisy and crew are even better! Scott Baron has a great gift of imagination and story telling!
Read more
One person found this helpful
Helpful
Sending feedback...
Thank you for your feedback.
Sorry, we failed to record your vote. Please try again
Report abuse

jeff cataline
5.0 out of 5 stars One great book
Reviewed in the United States on 12 August 2019
Format: Kindle EditionVerified Purchase
A really great book. I read alot of books and I can say I was surprised when Daisy got pregnant. Really rare occurrence.
Read more
Helpful
Sending feedback...
Thank you for your feedback.
Sorry, we failed to record your vote. Please try again
Report abuse

Neil Gilford
4.0 out of 5 stars Clockwork Chimera
Reviewed in the United States on 26 October 2019
Format: Kindle EditionVerified Purchase
A thoroughly enjoyable series. The story, characters, the twists and turns. Very well written and I am now looking for more from Scott Baron.
Read more
Helpful
Sending feedback...
Thank you for your feedback.
Sorry, we failed to record your vote. Please try again
Report abuse