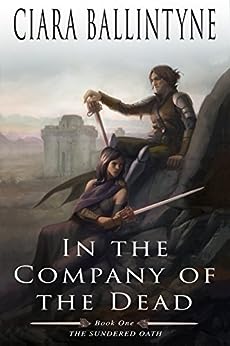 Only a fool crosses a god.

Chosen as a five-year-old orphan to be the Left Hand of Death, Ellaeva has nothing to call her own—nothing except a desire to avenge her slaughtered parents.

Lyram, third in line for the throne, is serving out his exile after the murder of his wife. When the castle is unexpectedly besieged, he fears his prince means to remove him from contention for the crown permanently.

Ellaeva’s arrival at the castle brings Lyram hope, until she reveals she has not come for the siege, but instead to hunt for a hidden necromancer dedicated to the dark god of decay.

Within their stone prison, Ellaeva and Lyram must fight to save themselves from political machinations and clashing gods. But as the siege lengthens, the greatest threat comes from an unexpected quarter.

IN THE COMPANY OF THE DEAD by Ciara Ballintyne

AUTHOR: Ciara Ballintyne holds degrees in law and accounting, and is a practising financial services lawyer. In her spare time, she speculates about taking over the world - how hard can it really be? If she could be anything, she'd choose a dragon, but if she's honest she shares more in common with Dr. Gregory House of House M.D. - both the good and the bad. She is a browncoat, a saltgunner, a Whedonite, a Sherlockian, a Ringer and a Whovian... OK, most major geek fandoms. Her alignment is chaotic good. She's an INTJ. Ciara lives in Sydney, Australia, with her husband, two daughters, and a growing menagerie of animals that unfortunately includes no dragons.

EDITOR: Marissa loves falling into a story and just going along for the ride, but she also loves capturing a story and examining it like a naturalist would, trying to figure out what makes it tick and how it turned out so beautiful. She started out editing National Geographic books, and has been editing full time for over five years now, working on all genres but specializing in science fiction and fantasy. She loves her job more all the time. Being able to help storytellers bring their ideas to life and seeing them grow as artists is incredibly rewarding. --This text refers to the paperback edition.

Ciara Ballintyne was born in 1981 in Sydney, Australia, where she lives with her husband, two daughters, one masochistic cat, and one cat with a god complex. She holds degrees in law and accounting, and has been a practising financial services lawyer since 2004. She is both an idealist and a cynic.

She started reading epic fantasy at the age of nine, when she kidnapped Castle of Wizardry by David Eddings from her father. Another two years passed before she began her first attempts at the craft of writing. Confronting the Demon is her debut book.

She enjoys horse-riding, and speculation about taking over the world. If she could choose to be anything it would be a dragon, but instead she shares more in common with Dr. Gregory House of House. M.D.

Amazon Customer
4.0 out of 5 stars A great read
Reviewed in Australia on 27 March 2021
Verified Purchase
This was a very easy read. The story flowed effortlessly, the MCs were charismatic, they engaged interest and elicited sympathy.
The glimpse of dragons was intriguing and I'm hoping they will play a larger part in future books.
There was a lot happening with not just battle action but background mystery and just a dollop of illicit romance. What's not to like, a great book to curl up with.
Read more
Helpful
Report abuse
See all reviews

Bookshelf Builder
4.0 out of 5 stars Almost there
Reviewed in the United Kingdom on 8 October 2019
Verified Purchase
This is a claustrophobic seige fantasy that almost had all the pieces, but was just down slightly by the delivery. It's a little wordy in places, and the pacing is a bit uneven, though the action is good and the characters are well pitched (though some of the secondary characters are hard to parse). Certainly worth a read if the concept appeals.
Read more
Report abuse

Maria, genuine critic
1.0 out of 5 stars What is with the out of sync pages
Reviewed in the United Kingdom on 2 November 2017
Verified Purchase
Couldn't read due the out of sync pages.. Get this sorted and maybe I can read it better . Needs upgrade
Read more
Report abuse

Chris
5.0 out of 5 stars Hooked
Reviewed in the United States on 23 September 2016
Verified Purchase
Ballintyne has done an excellent job weaving the indepth, backstabbing nature of politics and of the gods in this stunning beginning of this Dark Fantasy Series. Although a battle/ siege story it does not get so wrapped up in the battle to drag the plot. The characters development and descriptions throughout help drive the mystery of the story as well as the pace. Ellaeva, the goddess of death's Battle Priestess, is in a great struggle between her need for revenge and her duty to the goddess. To make matters worse, because of her station she is always alone on a path she did not chose but was chosen for her at the age of five and this places internal struggles on her as she yearns for situations she vowed against. Her personal struggles and human side make her far more believable and like able than the cold perfect priestess of death. In the same way Lyram caught up in politics due to his position by birth, and in a state of rage due to evil men and the horrific death of his wife, shows his faults and mistakes in his emotions, grief, and rage, helping the reader form a bond with him and a need for vengeance, even through his flaws.
Ballintyne's character development is not the only thing that hooked me in this read. Her detailed descriptions of the fights with the army and the monsters, the setting like the castle, the enemies and my favorite the weapons and clothes, specifically the kilts, made the story come alive. I also enjoyed the authors ability to toy with the plot and characters, setting up the interest to not only read on but an urge to get my hands on the next book . The big reveal was not expected at all and because I was so intrigued when it happened it worked to only fuel more questions and interest in the next book. I am not often surprised but this great adventure did just that.
Read more
4 people found this helpful
Report abuse

Janice E. Gehrlein
4.0 out of 5 stars CO of the Dead 1
Reviewed in the United States on 30 August 2017
Verified Purchase
A good book with great characters. A book of loyalty, dedication and love. The action is on going and exciting
Read more
Report abuse
See all reviews
Report an issue
Does this item contain inappropriate content?
Report
Do you believe that this item violates a copyright?
Report
Does this item contain quality or formatting issues?
Report