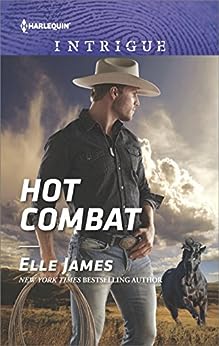 Raised an Air Force brat, Elle James got her work ethic from her dad, creativity from mom and inspiration from her sister. As a member of the reserves, she's traveled, managed a career, and raised three children. She and her husband even raised ostriches and emus. Ask her what it's like to go toe-to-toe with a 350-pound bird! Former manager of computer programmers, Elle is happy to write full time in NW Arkansas. --This text refers to an out of print or unavailable edition of this title.

Amazon Customer
3.0 out of 5 stars Not a realistic read
Reviewed in the United States on 12 July 2017
Verified Purchase
This book didn't resolve the issue at hand. Charlie is a single mom raising her daughter. To help make ends meet, she does some computer research for Homeland Security. While researching, she gets threats, calls her boss and her boss sends her a bodyguard.

Jon "Ghost" Casper is a Navy SEAL on medical leave. He's loaned out to this Homeland Security group in his hometown. He'd rather get back to the middle east and fight there than do bodyguard work.

The synopsis has you believing the "secret" of Charlie's daughter is a major issue. It's not. Jon finds out within seconds of seeing them that the little girl is his.

This couple also dated when they were young, hence the daughter he never knew he had. I can't agree with the reasoning of keeping the child from him. So he's in the military. He still deserved to know he fathered a child. Another hard to accept part of the book is this couple who were together years ago shouldn't now be going by his nickname. When they were together, he was Jon. But, he comes back and tells her his name in the military is Ghost and Charlie begins calling him that all the time...even during sex. Really?

Charlie's predicament wasn't resolved. Who threatened her? She should still be in danger, yet Ghost says he'll stay until the issue of the terrorists is resolved. I'm hoping the series answers some questions. Too much of this one remained unanswered. That and spelling/grammar mistakes had me rereading some parts just to figure it out.

Denise H
4.0 out of 5 stars Nice start to series...Can the past be resolved to make way towards a future
Reviewed in the United States on 4 July 2017
Verified Purchase
Jon “Ghost” Caspar is a SEAL recovering from a combat injury and on loan to the Department of Homeland Security for a pilot program in his hometown in Wyoming. Jon wants nothing more than to get through this assignment as quickly as possible so he can get back to Virginia and his SEAL unit. Returning to Wyoming stirs old memories and feelings, including the girl he left behind almost 7 years ago.

Charlie McClain is a single mom with a sweet little girl named Lolly. Struggling since her daughter’s birth to financially support them she went back to school for an IT degree and now develops software from home to be with Lolly. Having to pay off loans and needing more financial stability she works part time, in the evenings, surfing the internet for the Department of Homeland Security looking for possible threats and terrorists activity on-line.

She comes across a sight with some suspicious communications from a group called Free America and forwards it to her handler at the DHS and instantly receives emailed threats from whoever is running the site telling her they are aware of her presence and to back off. Suddenly fearful for hers and her daughter’s safety she contacts her handler for protection. This protection comes in the form of Ghost.

Ghost and Charlie are equally shocked when they come face to face after all these years. Memories and feelings spring forth as they both struggle to maintain a professional relationship until the threat to Charlie and her daughter is resolved. Will they be able to resolve the past and have a second chance? Or will the secret Charlie is keeping be too much for Jon to handle?
Read more
One person found this helpful
Report abuse

Book Lover
3.0 out of 5 stars Light entertainment
Reviewed in the United States on 9 February 2017
Verified Purchase
Charlie is single mother who tries to earn some extra money as a contract social media analyst for the Department of Homeland Security. Searching through the Internet she comes across suspicious information but by doing so, her cover is blown and threats against her start. Her handler decides to put her under protection and sends her a bodyguard. Jon “Ghost” Caspar, a SEAL, is on leave to recover from a combat injury. Until he's medically cleared to join his team he' s on loan to the Department of Homeland Security and in this capacity he's sent to his hometown to protect one of the DHS's operatives. Imagine Charlie's and Jon's surprise when they meet each other again after seven years - and not only that. There's a big surprise for Ghost that just could change his life.

I downloaded this book because I wanted a light read for the weekend. And this book was just that: a light and entertaining, though predictable book that offered several hours of reading pleasure.

However, and for my taste, this book lacked atmosphere. Yes, there were descriptions of scenery but they remained static and failed to let me “feel and smell” the ambience. The same goes for the bedroom scenes. They were elegantly described but lacked sizzle and passion.

I also thought that certain interesting points, which might have added to depth, weren't elaborated enough. For example, at some point it was mentioned that Charlie faced serious financial restrictions, which was the reason why she worked at the DHS. The book mentioned that this economic difficulties could be seen in the house. I would've expected Jon to refer to Charlie's financial circumstances. Maybe feel even a bit guilty about how he didn't support her (although he didn't know about the secret)? Also, isn't it curious that Jon never asked Charlie why she never dated during the 7 years he wasn't around? Or did she and how would that make him feel? And what about Charlie? She only briefly thought about Jon's potential relationships but didn't bother to ask…

In any case, this book was a nice and entertaining weekend read.
Read more
One person found this helpful
Report abuse

Colorado Avid Reader
5.0 out of 5 stars Local unrest leads to terrible consequences
Reviewed in the United States on 4 April 2019
Verified Purchase
The plot thickens as the story continues. Ghost, recovering from a severe wound, is in Wyoming to protect a Homeland staffer. Little does he know that he’ll be protecting Charlie, the woman he’s always loved. What he doesn’t know is that Charlie has a secret she’s kept from him for seven years. There’s unrest in the local town and everything’s about to erupt in a terrible way. With lots of action, and a sweet romance, this is an interesting read.
Read more
2 people found this helpful
Report abuse

Savsandy
3.0 out of 5 stars A Hot Mess
Reviewed in the United States on 6 June 2017
Verified Purchase
"Hot Combat" has a rock solid plot premise and character development is adequate but the writing itself is lackluster at best. Not to pile on, but some of the mixed up homophones set my teeth on edge, i.e. led vs lead, and boarders vs borders. Then there was "assimilated" when "assembled" was called for. And don't get me started on the mixed metaphors: "fumbled the pitch and struck out" and "I love you from the tips of my toes to the very last breath". Huh? Shouldn't an author do some basic research for a novel? No self-respecting horse lover or westerner would ever describe a pony or horse as "chocolate brown with a cream-colored mane and tail." The proper description is "liver chestnut with a flaxen mane and tail." Call me a nitpicker if you will but the reader cannot be expected to ignore such glaring errors in a published work.
Read more
Report abuse
See all reviews
Back to top
Get to Know Us
Make Money with Us
Let Us Help You
And don't forget:
© 1996-2021, Amazon.com, Inc. or its affiliates