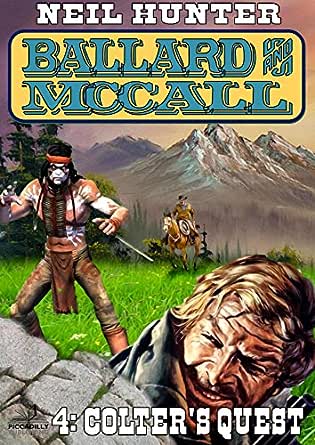 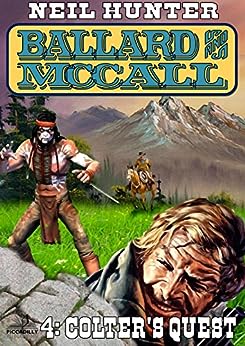 When Chet Ballard visits an old friend, Ben Colter, in New Mexico, he finds Colter’s ranch burned to the ground, Ben and his wife Rachel missing, and the Apache who worked for Colter badly wounded. It turns out that whoever hit the ranch did so in order to  kidnap Rachel. But why?
While McCall goes in search of Colter, Ballard finds his own trail being dogged by vicious bounty hunters and an Apache on a blood hunt.
Along the way Colter begins to understand why his wife has been taken. It also reveals the desire of a ghost from the past to get his hands on a treasure that has lain hidden for years – a cache that only Ben Colter knows how to locate.
As all the different characters make their desperate attempts to gain what they seek, Ballard and McCall can only help Ben locate and save his missing wife in the bullet-riddled finale of Colter’s Quest.

Neil Hunter is a pseudonym of the prolific Lancashire-born writer Michael R. Linaker. As Neil Hunter, Mike wrote two classic western series, BODIE THE STALKER and JASON BRAND. Under the name Richard Wyler he produced four stand-alone westerns, INCIDENT AT BUTLER’S STATION, THE SAVAGE JOURNEY, BRIGHAM’S WAY and TRAVIS. Another western, HIGH KILL, was later published in the SUNDANCE series as BOUNTY KILLER. His western output can also be found under the names ‘Dan Stewart’, ‘John C. Danner’ and ‘Frederick H. Christian’, the latter name employed when he ghost-wrote an additional five titles in Frederick Nolan’s popular FRANK ANGEL series. Mike has written three ‘nasty’ horror novels under his own name, but since the late 1980s has become best-known as one of the most popular contributors to Gold Eagle’s MACK BOLAN series, chronicling the adventures of PHOENIX FORCE, THE EXECUTIONER and STONY MAN, as well as his own action-packed series, CADE.
click to open popover

Kindle Customer
5.0 out of 5 stars DON'T MESS WITH COLTER
25 January 2018 - Published on Amazon.com
Verified Purchase
Another great western full of action, revenge and destroying Colter's ranch. Horn a vengeful lover of Rachel, Colter's wife, who loved and marry Colter. There's hidden gold and silver left by a Father Corazon, a Spanish priest alone and lost in a desert cave somewhere in New Mexico. Ballard and McCall friends of Colter were on their way to visit him and his wife Rachel, only to find the ranch burned and Chat, an Apache friend who helped with horses on the ranch, you know selling, capturing the wild mustangs.
Lots of action, betrayals and back shooting. Ugly people with horrific altitudes...you know no empath for his fellow human beings. Sociopaths would be a better description. Fast reading each page and chapter you'll find action, action..Keep your canteens full, lots of riding through dry country....🌵🌵

Brian Brown
2.0 out of 5 stars Confusion
8 June 2017 - Published on Amazon.com
Verified Purchase
There are getting to be more and more misspelled words and the characters are getting scrambled at different times taking you completely out the story. Don't understand why they are not proofread.
Read more
One person found this helpful

Amazon Customer
5.0 out of 5 stars Five Stars
14 March 2017 - Published on Amazon.com
Verified Purchase
Great
Read more
Go to Amazon.com to see all 4 reviews 3.9 out of 5 stars
Get FREE delivery with Amazon Prime
Prime members enjoy FREE Delivery and exclusive access to movies, TV shows, music, Kindle e-books, Twitch Prime, and more.
> Get Started
Back to top
Get to Know Us
Make Money with Us
Let Us Help You
And don't forget:
© 1996-2020, Amazon.com, Inc. or its affiliates