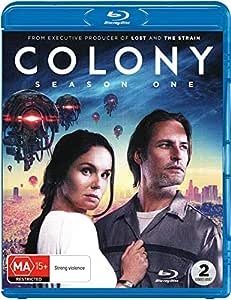 From executive producers Carlton Cuse (Lost) and Ryan Condal (Hercules), comes a sci-fi thriller that critics promise will be "your newest obsession" (Clarke Wolfe, Nerdist). Set in the very near future, Colony centers on one family's struggle to survive an occupied Los Angeles, now a dangerous world of divided ideologies. While some choose to collaborate with the occupation and benefit from the new order, others rebel and suffer the consequences. Will Bowman (Josh Holloway, Lost) a former FBI agent, and his wife Katie (Sarah Wayne Callies, The Walking Dead) have been separated from their son during the invasion and do whatever is necessary to be reunited. Own all 10 Season One episodes of the series that critics rave is "fresh, interesting and worth following" (Robert Bianco, USA Today).

Amazon Customer
5.0 out of 5 stars Like, if you're in need of power
28 September 2014 - Published on Amazon.com
Verified Purchase
It's well worth seeing this, to know how people you find yourself with in a SHTF event may act.

I watched it before on TV, but I wanted to see it again, so I bought it. Now that I'm watching it again, I'm noticing things I didn't pick up on during the first viewing. Like, if you're in need of power, why struggle to build a generator? Just keep taking batteries from abandoned cars. (There would be plenty in this particular disease epidemic survivor scenario.) And also, don't MAKE shoes. Break into a store to get new ones, break into a house to get new ones, or take them off dead people. (Either victims who were not immune to the epidemic, the way these people seem to have been, or else dig them up from graves of people who died before this epidemic occurred. Hinky, but understandable. And the dead don't NEED shoes.)

Charles
5.0 out of 5 stars Great show showing human ingenuity applied to a survival situation
13 October 2016 - Published on Amazon.com
Verified Purchase
Great show showing human ingenuity applied to a survival situation. The show follows ten "colonists", survivors of an imagined disaster that has devastated the world. The colonists are given a dilapidated warehouse to live, and survive in, along with all of the tools and parts that the warehouse contains. In order to make the simulation highly realistic, bands of marauders constantly attack the colonists. The marauders are not allowed to physically harm the colonists, but the colonists do not know that.
Each of the colonists has a different real-life occupation, including: a physician, a Aerospace engineer, an electronics/computer engineer, a handyman, contractor, and a marine biologist. While some tend to receive more lime-light than others, all are well represented.
Some of the more interesting encounters happen when the colonists are permitted to leave their warehouse to "loot and scavenge" in cordoned-off locations for various supplies.
The most amazing part of the show is how many astounding displays of ingenuity are present with the colonists using what most would consider garbage in order to create machines that can help them to survive.
Great show.

LisaRose
5.0 out of 5 stars Very interesting show
23 August 2018 - Published on Amazon.com
Verified Purchase
Loved the concept for the show but couldn't stand a few of the participants but I guess that's how the situation would be in this kind if scenario, having to work with all different types of personalities. I preferred the 2nd season to this one and really wish they would have made more....
Read more

Gerri Hayes
5.0 out of 5 stars Love it!!!
19 December 2013 - Published on Amazon.com
Verified Purchase
I really loved this series and wanted very much to see more! I got very interested in the characters and wanted to see how they faired once they decided not to trust the government and go off on their own.

When they were sailing down the river pass the house that they thought they would inhabit, I wondered what happen to them???

I hope it picks up with these survivors of that experience in a new series?
This review is for all of the episodes of the Colony that has been put out so far...!
Read more
One person found this helpful

Dennis Pechek
4.0 out of 5 stars Excellent
22 September 2013 - Published on Amazon.com
Verified Purchase
Ever wonder what things are really important in life? Watch this show. If things ever get really bad, this show puts many things into perspective. All the salesmanship about gold having value in the event of world wide upheaval, "The Colony" provides an entirely different point of view on value.

Interesting characters and situations. Fascinating to see how priorities change when it comes down to survival and the choices we are forced to make.

If nothing else, it will make you think.
Read more
One person found this helpful
Go to Amazon.com to see all 139 reviews 4.2 out of 5 stars