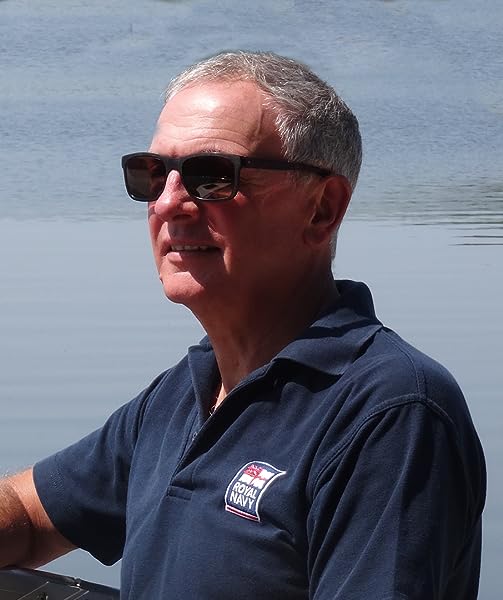 by Chris Durbin (Author)
4.4 out of 5 stars 309 ratings
See all formats and editions
Sorry, there was a problem loading this page. Try again.

Chris Durbin spent twenty-four years as a warfare officer in the Royal Navy, serving in all classes of ship from aircraft carriers through destroyers and frigates to the smallest minesweepers. He took part in operational campaigns in the Falkland Islands, the Middle East, and the Adriatic. As a personnel exchange officer, he spent two years teaching tactics at a U.S. Navy training center in San Diego. On his retirement from the Royal Navy, Chris joined a large American company and spent eighteen years in the aerospace, defense and security industry, including two years on the design team for the Queen Elizabeth class aircraft carriers. Chris is a graduate of the Britannia Royal Naval College at Dartmouth, the British Army Command and Staff College, the United States Navy War College (where he gained a postgraduate diploma in national security decision-making), and Cambridge University (where he was awarded an MPhil in International Relations).

Start reading The Colonial Post-Captain on your Kindle in under a minute.

Chris Durbin grew up in the seaside town of Porthcawl in South Wales. His first experience of sailing was as a sea cadet in the treacherous tideway of the Bristol Channel, and at the age of sixteen, he spent a week in a tops’l schooner in the Southwest Approaches. He was a crew member on the Porthcawl lifeboat before joining the navy.

Chris spent twenty-four years as a warfare officer in the Royal Navy, serving in all classes of ship from aircraft carriers through destroyers and frigates to the smallest minesweepers. He took part in operational campaigns in the Falkland Islands, the Middle East and the Adriatic and he spent two years teaching tactics at a US Navy training centre in San Diego.

On his retirement from the Royal Navy, Chris joined a large American company and spent eighteen years in the aerospace, defence and security industry, including two years on the design team for the Queen Elizabeth class aircraft carriers.

Chris is a graduate of the Britannia Royal Naval College at Dartmouth, the British Army Command and Staff College, the United States Navy War College (where he gained a postgraduate diploma in national security decision-making) and Cambridge University (where he was awarded an MPhil in International Relations).

With a lifelong interest in naval history and a long-standing ambition to write historical fiction, Chris has embarked upon creating the Carlisle & Holbrooke series, in which a colonial Virginian commands a British navy frigate during the middle years of the eighteenth century.

The series will follow its principal characters through the Seven Years War and into the period of turbulent relations between Britain and her American Colonies in the 1760s. They’ll negotiate some thought-provoking loyalty issues when British policy and colonial restlessness lead inexorably to the American Revolution.

Chris lives on the south coast of England, surrounded by hundreds of years of naval history. His three children are all busy growing their own families and careers while Chris and his wife (US Navy, retired) of thirty-nineyears enjoy sailing their Cornish Shrimper 21.

Chris shares his garden with a tortoise named Aubrey. If you’ve read Patrick O'Brian's HMS Surprise, or have seen the 2003 film Master and Commander: The Far Side of the World, you'll recognise the modest act of homage that Chris has paid to that great writer. Rest assured that Aubrey has not yet grown to the gigantic proportions of Testudo Aubreii.

4.4 out of 5 stars
4.4 out of 5
309 global ratings
How are ratings calculated?
To calculate the overall star rating and percentage breakdown by star, we don’t use a simple average. Instead, our system considers things like how recent a review is and if the reviewer bought the item on Amazon. It also analyses reviews to verify trustworthiness.

Alan franks
2.0 out of 5 stars A bit too much detail
Reviewed in Australia on 30 December 2018
Verified Purchase
Well written,, but I found myself speed reading at times .
Read more
Helpful
Report abuse

Warren Richter
5.0 out of 5 stars If you miss Aubrey and Maturin there’s solace here
Reviewed in Australia on 25 June 2018
Wonderful. I have been searching for an author on a par with Patrick O’Brian and Chris Durbin fits the bill. Great character development, excellent dialogue and an intriguing mix of strategy and action. First class!
Read more
Helpful
Report abuse

Lyn Smith
5.0 out of 5 stars Another ,War at Sea
Reviewed in Australia on 7 July 2018
Well researched and a believeable plot structure
It also deals with the infamous Admiral Byng. There is an almost believable hint of romance in the story about a war at sea without Napoleon being involved.

Tony Watson
5.0 out of 5 stars Excellent viewpoint on a scar in the Navy's reputation.
Reviewed in the United Kingdom on 20 August 2018
Verified Purchase
Very unusual to see this infamous episode in British naval history covered with such an unbiased slant.
The disgrace of Admiral Byng is well-known, but here we see the other side of the coin, and the mistakes and bad decisions of the Admiralty and Parliament ultimately descended on Byng as a scapegoat.
Bing's errors were prevarication, prudence and delay; not exactly the chicken-hearted dereliction of duty in the face of the enemy that is usually broadcast.
Seen from a junior Captain's perspective and the daring chances he took, Byng's choices must have seemed debatable at best, and at worst cowardly.
Aside from this is a parallel story with a hint of love interest - not usually my cup of tea, but handled very well, along with some business and political intrigue, where our Captain has to tread very warily.
What Mr Durbin does best here is in his descriptions of events; the lay of the land, disposition of ships, the wind direction - all are finely detailed, so one has a vivid picture of impending events locked in the mind, which makes for thrilling reading as one imagines the possibilities and dangers as the plot unfolds.
His characterisations are excellent too; we see below the surface of the protagonists and feel their inner emotions and aspirations. And the history is impeccably researched, but not 'in your face'.
The follow-on book is just as good. Both highly recommended!

Christopher J. Eley
5.0 out of 5 stars Excellent read comparable to the best naval fiction
Reviewed in the United Kingdom on 13 October 2018
Verified Purchase
As an avid reader of naval fiction since about 1963, aged 14 with The Happy Return, I have been trying most similar authors ever since, and cannot resdit a series. However, I miss some as I detest kindle, and hardbacks without discount are ludicrously priced so my market is restricted to thise two avenues. I have to wait too long for Dewey Lambin in paperback and cannot get into Patrick 'O' Brian, but most others I find enjoyable. I have to say that having read the first in the series I simply had to order the others ,both of which I anticipating will be equally as good. To have discovered a new author at this stage in my life; and one who can 'float my boat' (sorry!) , is a wondrous thing and I kook forward to more excellent reads in this series.
Read more
6 people found this helpful
Report abuse

Edoardo Albert
4.0 out of 5 stars Excellent addition to historical naval fiction
Reviewed in the United Kingdom on 18 August 2019
Verified Purchase
In literary terms I have two guilty pleasures: military SF (ie. big guys usually wearing exosuits blasting aliens) and Napoleonic-era naval fiction. Add to that a third: naval fiction set during (and just before) the Seven Years' War, the global conflict between Britain and its allies, and France and her allies, that saw the British ascend to a place among the global powers. In naval terms, Chris Durbin's first novel telling the adventures of Captain Carlisle, a colonial American serving in His Majesty's Royal Navy, and his lieutenant, George Holbrooke, is not very different from the worlds of Jack Aubrey and Steven Maturin or Horatio Hornblower (which is probably why I like it so much!) and Durbin does an excellent job of introducing and differentiating his two main characters, while keeping them men of their time. If, as I do, you like Napoleonic-era naval fiction, then think on expanding your reading horizons to the generation before: you won't be disappointed.
Read more
3 people found this helpful
Report abuse

Fred
5.0 out of 5 stars A very pleasurable read from this super author.
Reviewed in the United Kingdom on 5 July 2018
Verified Purchase
CHRIS DURBIN The Colonial Post Captain (160618) A really good start and an immediate presence of energy and a nautical professional ease in the quality and content of the writing. (9%). Book started with access to the free sample, at the end of I felt completely committed and with a wish to read the whole book. By 17%, I was delighted with my choice. More super stuff 37% - so far, excellent! Brilliant 39%! Quite simply - Fantastic! (84%). A very enjoyable read but sadly, running out of book! Mr Durbin you have a fan!

Suzy r
4.0 out of 5 stars A great start to a superb highly readable series
Reviewed in the United Kingdom on 12 June 2020
Verified Purchase
A very readable start to a great series with good characters and an interesting historical perspective.
This series gets better and better and all this book was a moderate light read - the series gets even better from book two. I particulary like the historical notes that the author adds to the end of the book which tells you some of the background around the political characters which may only have a passsing mention in the book and what happened in reality.
The characters are well drawn and the pace is excellent. Very enjoyable and I recommend the whole series.
Read more
Report abuse
See all reviews
Back to top
Get to Know Us
Make Money with Us
Let Us Help You
And don't forget:
© 1996-2021, Amazon.com, Inc. or its affiliates