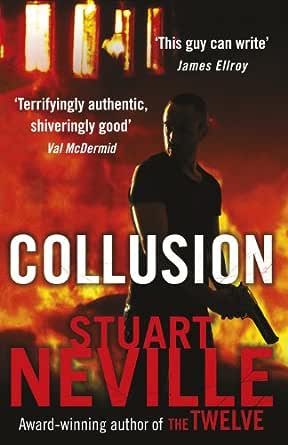 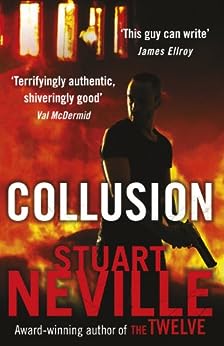 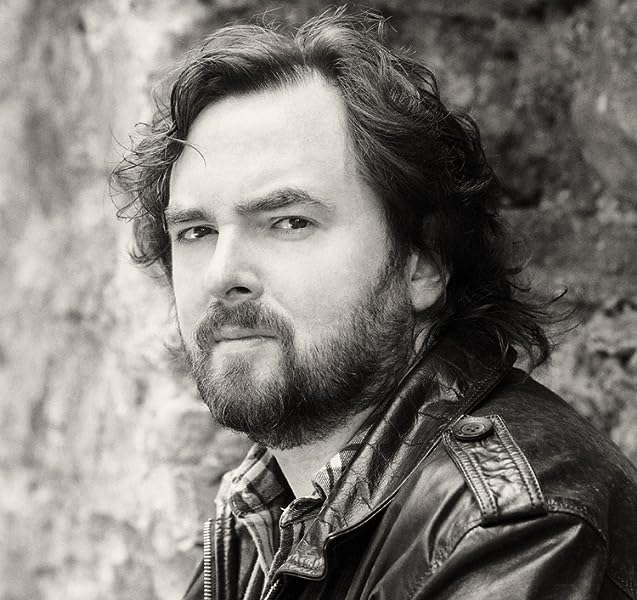 Brisk, addictive and possessing an expert sense of when to play the "supernatural" card, Collusion is a worthy successor to one of last year's best thrillers -- John O'Connell ― Guardian

James Ellroy and Val McDermid were among admirers of Stuart Neville's corpse-filled debut The Twelve, and his follow-up Collusion is another mesmerising Belfast blood bath. The Traveller and O'Kane are memorably grotesque creations and Neville's violent showdowns rival those in Jacobean revenge plays -- John Dugdale ― Sunday Times

A second novel that not only lives up to the promise of the first, but actually exceeds it -- John Connolly

Fast-paced, coolly plotted -- Time Out --This text refers to an alternate kindle_edition edition.

Stuart Neville’s first novel, The Twelve, was one of the most critically acclaimed crime debuts of recent years, winning the Los Angeles Times Book Prize for best thriller. Collusion, Stolen Souls, Ratlines (shortlisted for the CWA Ian Fleming Steel Dagger), The Final Silence and Those We Left Behind (a Richard and Judy Book Club choice) have garnered widespread praise, confirming his position as one of the most exciting crime authors writing today.

Gerry Fegan: the former hit man is hiding out in New York, having cut all ties with his old life. But he made a fatal mistake: he spared the life of Bull O'Kane, a ruthless gang leader who will stop at nothing to get his revenge.

The Traveller: a merciless assassin who kills without pity or remorse, The Traveller is hired by O'Kane.His instructions are to find - and terminate - Fegan, and O'Kane knows the perfect bait to lure Fegan back to Belfast.

Detective Jack Lennon: his family have disowned him and his colleagues don't trust him. But when he discovers that his ex-partner and young daughter are helpless pawns caught up in O'Kane's thirst for vengeance, Lennon must enter into a desperate alliance if he is to save them both.

The brilliant follow-up to the debut thriller of 2009, The Twelve. 'If you like Neville's debut thriller 'The Twelve' last year - as I most certainly did - his second is even better' Daily Mail --This text refers to an alternate kindle_edition edition.
Read more

4.3 out of 5 stars
4.3 out of 5
170 global ratings
How are ratings calculated?
To calculate the overall star rating and percentage breakdown by star, we don’t use a simple average. Instead, our system considers things like how recent a review is and if the reviewer bought the item on Amazon. It also analyses reviews to verify trustworthiness.

Ruju
4.0 out of 5 stars Fast-flowing and entertaining ride
Reviewed in the United Kingdom on 22 July 2020
Verified Purchase
When I saw that The Twelve (or The Gosts of Belfast) had become the first in the Jack Lennon series, I was somewhat surprised. The Twelve, an excellent novel, was in the most part about the (deservedly) troubled soul of Gerry Fagan. Despite featuring more of Lennon, Collusion is a three way tale featuring the POVs of Lennon, Fagan and The Traveller. In keeping with the first book, all three have their demons. There are other interested parties here, and all have their own agendas. It can't quite reach the heights of its predecessor, but Collusion is still a fast-flowing and entertaining ride.
Read more
Report abuse

Gary A. Swaby
4.0 out of 5 stars Great sequel that leaves me wanting even more
Reviewed in the United Kingdom on 27 November 2010
Verified Purchase
I read and reviewed The Twelve before. I really enjoyed reading that book and it made me a fan of Stuart Neville instantly. It was only a matter of time before I read the sequel Collusion; and now that I have finished it I can say that although some story elements were upsetting, Stuart Neville has evolved as a writer. Collusion introduces a handful of new characters, most notably Jack Lennon and The Traveler. Both characters were written well, to the point the story no longer feels as though it is Gerry Fegan's. Although I am a big follower of Gerry Fegan, The Traveler quickly became my favorite character. Many people feel like his character didn't fit his apparent reputation, but I thought The Traveler was brilliantly portrayed by Neville.

I am fairly upset by the outcome of the book. But I hope Stuart Neville will do future books centered around The Traveler. I fully recommend this book to anybody who read The Twelve.

pixie g
3.0 out of 5 stars average ...
Reviewed in the United Kingdom on 18 October 2010
Verified Purchase
I recently read 'The Twelve', which was the prequel to 'Collusion' and found it completely compelling ... but sadly 'Collusion' was disappointing. The 'villain', 'The Traveller' is supposedly a fearsome contract killer - but along the way he seems to make so many mistakes, and suffers so many minor unfortunate incidents (in which he comes off badly) that you'd almost expect to see him popping up as the villain in a gangster spoof. Having said that, the plot carries the reader along, and I would read another book by Stuart Neville - but I'd hope that the next book matches the standard of his first ('The Twelve') rather than 'Collusion'.
Read more
8 people found this helpful
Report abuse

alan knight
5.0 out of 5 stars Collusion book
Reviewed in the United Kingdom on 25 March 2020
Verified Purchase
Asked to get this as a gift and got a thank you letter so I guess it hit what was wanted.
Read more
Report abuse

Amon.E.Mus.
4.0 out of 5 stars Not as good as 'the twelve'
Reviewed in the United Kingdom on 1 April 2013
Verified Purchase
As another critic mentions this is one star down from Stuart Nevilles debut novel. I personally accredit this to the storyline; I feel the book is primarily based on the final showdown between 'The Traveller' and Fegan, and as a reader I was disappointed with the anti climax. Whereas I felt fulfilled with the ending in 'The Twelve' I did not so here. Nontheless, it was definitely worth the read, Its not your typical hard boiled, gritty crime novel. Neville focuses more on the action i feel as opposed to the drama.
Read more
Report abuse
See all reviews
Back to top
Get to Know Us
Make Money with Us
Let Us Help You
And don't forget:
© 1996-2021, Amazon.com, Inc. or its affiliates