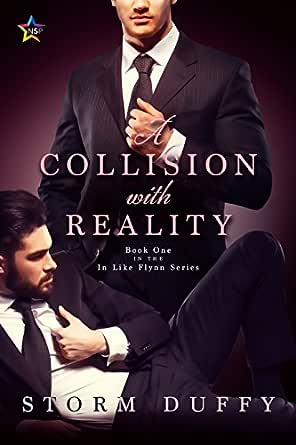 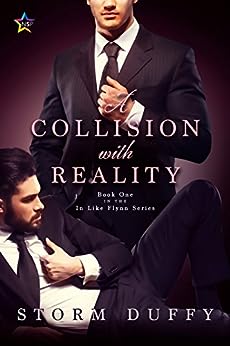 A Collision with Reality (In Like Flynn Book 1) Kindle Edition

Flynn’s new boss is so hot he can’t wait to get home to tell the chatroom how much he wants Dom’s cock down his throat. By Friday, he's shared quite a few thoughts on what he'd like his boss to do to him. But he’s not as anonymous as he thinks, and Dom’s intent on disciplining him for breaching company policy on social networking. Dom gives him a choice of put up or shut up: he can play out the fantasy in real life, or he can walk out of the office without a word to HR as long as he never talks that way about Dom again. Flynn chooses “put up”—but he's forgotten about one of the things he said he wouldn't mind doing.
click to open popover

kyxes
5.0 out of 5 stars Please Sir! May I have some more?
17 July 2019 - Published on Amazon.com
Verified Purchase
I read Lord and Master, so this style and theme are familiar to me. This was the perfect appetizer. I hope to get the full meal. However, I think I know the author and this may take some time. But I will be ready when it comes. Thanks for continuing to write.
Read more

ROROBLUSMUM
3.0 out of 5 stars A little bit of well-written erotica, but which doesn't really go anywhere. Unsure if part 2, etc. will have the same co-lead?
8 January 2017 - Published on Amazon.com
This is nicely-written, but it's very short and without character development. It's the kind of read for when you've paused with a cup of coffee, but after that, it's kind of out of your mind, because there's no hint of anything...permanent or at least, continuing to it.

I did like the idea of the boss guy putting two and two together and getting his sums right, but there was no explanation for why he was on the 'boards', though I didn't need an explanation of why Flynn was. The 'punishment' was sexy and hot enough, but rather one-sided, though it was the stuff of Flynn's fantasies.

It had a completely open ending, meaning that I wasn't at all sure who'd be Flynn's co-lead in the next in the series - which could run and run. I think because of this, I'd read more if they were freebies, but would prefer to buy once the last book is published, and then only, if there's some indication of things heading somewhere for the guys, and with it being the two same guys in the series all along.

Maybe erotica's not for me?

~Jenny Is My Name~
4.0 out of 5 stars Steamy short!
4 January 2017 - Published on Amazon.com
I recieved a copy of this book with the promise of an honest and unbiased review via. IndiGo Marketing & Design...

Looks like Flynn got caught in a chat room talking about his new boss.....Dominic, or Dom as he liked to tease.
Flynn had a thing for his boss and not only had fantasies but talked about them in a chat forumn with other people. Unfortunately, or maybe fortunately, Dom just might have been following.
Of course, I did think it was a little far fetched, because there are billions of chat forumns around and who's to say they found the exact one as each other and knew who he was talking about... but he did, so... one of those fantasies got to play out after hours.
It isn't a romantic short story, just a hookup between boss and employee... while it was hot, it was over after the one encounter but gave way to maybe see more from these two at a later time.
The cover was hot and the steaminess factor was pretty steamy.
I enjoyed it, for a smutty, short read.
3.5 for me!
Read more

Amazon Customer
3.0 out of 5 stars I liked Dom putting the experience in perspective to thin Flynn ...
3 January 2017 - Published on Amazon.com
A Scattered Thoughts and Rogue Words Review An Alisa Review:

A Collision with Reality by Storm Duffy

This story wasn’t a romance, but that isn’t what I was expecting either. Flynn lets out his fantasies online thinking that no one will ever know. He continues and when he mentions a different coworker his new boss knows exactly who has been making the comments.

I could feel how cocky Flynn was, thinking that he wouldn’t have anything to worry about with his posts. Flynn is blindsided when Dom confronts him, but gets the opportunity to play out his fantasies. I liked Dom putting the experience in perspective to thin Flynn in the end. I’m interested to read more in this series to see what else Flynn gets up to.

Cover art by Natasha Snow is nice and gives great visuals of the characters.
Read more
Go to Amazon.com to see all 9 reviews 3.8 out of 5 stars
Get FREE delivery with Amazon Prime
Prime members enjoy FREE Delivery and exclusive access to movies, TV shows, music, Kindle e-books, Twitch Prime, and more.
> Get Started
Back to top
Get to Know Us
Make Money with Us
Let Us Help You
And don't forget:
© 1996-2020, Amazon.com, Inc. or its affiliates