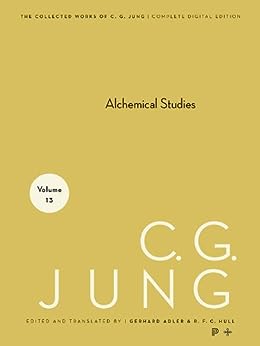 This collection of five essays, with numerous illustrations, traces his developing interest in alchemy from 1929 on and may be read both as a useful introduction and as a valuable supplement to his longer works on the subject. --This text refers to the hardcover edition.

'It is remarkable how the various themes of alchemy appear in these essays with a new and illuminating difference each time. ...In the end I did not find the book obscure at all, as so many of Jung's writings on alchemy have seemed to be after a first reading, because alchemy itself was so full of obscurities.' - Joseph L. Henderson, Journal of Analytical Psychology --This text refers to an out of print or unavailable edition of this title.

Graham Mummery
5.0 out of 5 stars Jung's more approachable works on Alchemy
Reviewed in the United Kingdom on 11 August 2010
Verified Purchase
Jung's alchemical writings are amongst the most difficult in his opus. There are three volumes of this in his Collected Works:  Psychology and Alchemy (Collected Works of C.G. Jung)  which is difficult, but repays effort (follow the link to see my review of it); the  Collected Works of C.G. Jung: Mysterium Coniunctionis: An Inquiry into the Separation and Synthesis of Psychic Opposites in Alchemy , which I've read, but that still defeats me; and finally this one.

Of the three, "Alchemical Studies," is by far the most approachable, though there may be some occasional difficulties the text provides. The first part is Jung's commentary on
The Secret of the Golden Flower: Chinese Book of Life (Arkana)  which is essential reading for anyone interested in his ideas, and should not create problems for a general reader. It's available separately for those not wanting to purchase this volume. But here there are three more essays.

One on "Paracelsus as a Spirtual Phenomenon" is Jung's longest essay in this volume about the late Mediaeval alchemist and doctor who is considered the founder of modern chemistry and medicine. It is more technical than Jung's other essays on the same subject in  RC Series Bundle: The Spirit in Man, Art and Literature (Routledge Classics) - which might be read as an introduction to the one here - but certainly worth reading for the greater depth. Then there are two other fascinating essays on alchemical symbolism.

As with the other alchemical volumes, "Alchemical Studies" is probably mainly of esoteric interest and for specialists, excepting perhaps the commentary on the Secret of the Golden Flower. However, if only reading one of them, this is the one to read as it will immediately repay effort, and provide a good introduction preparing for the other volumes. Or alternatively, look up a number of anthologies of Jung's writings on Alchemy or in Anthony Storr's  The Essential Jung: Selected Writings .
Read more
12 people found this helpful
Report abuse

Lisamay
4.0 out of 5 stars On my study list
Reviewed in the United Kingdom on 10 February 2013
Verified Purchase
A fundamental book on alchemy from Jung, who was amazed to discover that he had intuited a similar idea to the ancient alchemists before some of the texts written centuries ago came into his possession. Any student of Jung would want to own this book.
Read more
One person found this helpful
Report abuse

Andrew Rowe
5.0 out of 5 stars We're Off To See The Wizard...
Reviewed in the United Kingdom on 27 July 2009
Verified Purchase
Not a bad book at all, though I still don't believe that "The Collective Unconsious" can be observed "empirically", it's just a bunch of commonalities and associations, if people can draw pictures of circles, that doesn't make a circle an "archtype" that is imbedded in a vast and "collective" unconscious. I think that C.G.Jung says some interesting things, I simply don't wanna "follow" his science/religion.

Jose M. Barrera
1.0 out of 5 stars No Illustrations
Reviewed in the United States on 27 March 2018
Verified Purchase
The publishers of this book decided to prive the reader from seeing more than 50 illustrations mentioned and instrumental to the understanding of the text. A misleading note on the backcover claims in red font that this volume is complete and unabridgged.
DO NOT BUY THIS EDITION.
Read more

1.0 out of 5 stars No Illustrations
Reviewed in the United States on 27 March 2018
The publishers of this book decided to prive the reader from seeing more than 50 illustrations mentioned and instrumental to the understanding of the text. A misleading note on the backcover claims in red font that this volume is complete and unabridgged.
DO NOT BUY THIS EDITION.

Christian Irigaray
5.0 out of 5 stars Awesome as usual with Jung
Reviewed in the United States on 30 March 2017
Verified Purchase
What can one say? As always, Jung delivers an outstanding study of the complex and little known world of alchemy and does so in a very professional and synthetic manner that allows one to approach the subject seriously and without prejudice. As many of his great works, this one is full of references and quotes which expose the value of alchemy and archetypal symbols in the path of individuation or knowledge of Self. This work is not only for psychologists and specialists but above all for those interested in knowing themselves and discovering the ties between archetypal symbols related to the path of self realization. Outstanding. The presentation is excellent: among the best of any books I have purchased. Buy it and read it, you will not be disappointed.
Read more
One person found this helpful
Report abuse
See all reviews
Back to top
Get to Know Us
Make Money with Us
Let Us Help You
And don't forget:
© 1996-2021, Amazon.com, Inc. or its affiliates