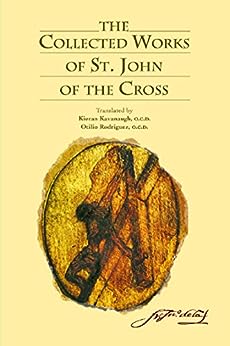 Saint John of the Cross

The Collected Works of St. John of the Cross (includes The Ascent of Mount Carmel, The Dark Night, The Spiritual Canticle, The Living Flame of Love, Letters, and The Minor Works) [Revised Edition] Kindle Edition

Saint John of the Cross (1542–1591) was a Spanish mystic and a Carmelite friar and priest. He is known for his reforming of the Carmelite Order and his writings. --This text refers to the paperback edition.

An excellent and practical edition. --Studium

This is an extremely worthwhile and classic resource for cultivating a deeper inner life. --Theological Students Fellowship

The Institute of Carmelite Studies publishes excellent works at very inexpensive prices; its exemplary edition of The Collected Works of Saint John of the Cross, for instance, would get my vote as one of the best theological buys of all time. --Lawrence Cunningham, U.S. Catholic --This text refers to the paperback edition.

4.8 out of 5 stars
4.8 out of 5
341 global ratings
How are ratings calculated?
To calculate the overall star rating and percentage breakdown by star, we don’t use a simple average. Instead, our system considers things like how recent a review is and if the reviewer bought the item on Amazon. It also analyses reviews to verify trustworthiness.

J. McGregor
5.0 out of 5 stars Amazing Value for such Great Works of Christian Spirituality
Reviewed in the United Kingdom on 30 July 2019
Verified Purchase
I have bought this book to add to a fair collection of medieval works on spirituality. I believe the translators are experts in the Carmelite field of spirituality. What also made me buy this book is the relative cost to its size: £16 for 800 pages! Hard to beat really. Also, great type face, good thickness to the pages, and a very good binding for such a large paperback. I am not going to comment on the works contained within as they are out of my league right now (but who knows what the future might bring?) but those who buy this book know what they are aspiring to: the awareness and contemplation of God within!
Read more
2 people found this helpful
Report abuse

Amazon Customer
5.0 out of 5 stars Classic
Reviewed in the United Kingdom on 28 April 2017
Verified Purchase
This version is the one recommended by my Discalced Carmelite spiritual director. It is the one we study with as secular order members. So, if you are concerned to get what is considered a quality and accurate translation, this is it.
Read more
9 people found this helpful
Report abuse

Mr. A. PRYCE
5.0 out of 5 stars Best translation available.
Reviewed in the United Kingdom on 22 April 2019
Verified Purchase
The best translation by far. This latest revision is an improvement on the previous version. Would definitely recommend this version.
Read more
3 people found this helpful
Report abuse

anon
5.0 out of 5 stars John of the Cross: Collected Works
Reviewed in the United Kingdom on 6 February 2021
Verified Purchase
Bought as a gift for a happy recipient.
Read more
One person found this helpful
Report abuse

Amazon Customer
5.0 out of 5 stars Very pleased with the collection
Reviewed in the United Kingdom on 6 July 2018
Verified Purchase
Very well set out. Very pleased with the collection. Thank you.
Read more
2 people found this helpful
Report abuse
See all reviews
Back to top
Get to Know Us
Make Money with Us
Let Us Help You
And don't forget:
© 1996-2021, Amazon.com, Inc. or its affiliates