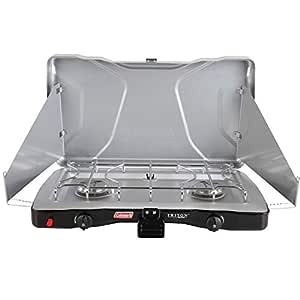 Coleman camping & outdoors
Shop the full range of Coleman, for all your camping and hiking needs Shop now >

Take camp cooking to the next level with the Coleman Triton Propane Stove. Just light it up and dial in your heat with the two independently adjustable burners and you can be cooking over 22000 BTUs of power in no time. The cooking surface offers plenty of room to fit a 12-inch and 10-inch pan simultaneously. The Perfect flow pressure control technology keeps the heat steady, even in extreme conditions. WindBlock panels help shield your flame from wind and they adjust if you need to fit a larger pan. When the meal is over, the chrome-plated grate removes for simple and quick clean-up and the heavy-duty latch will keep the lid secure until you whip up your next family dinner.

Danny Higgins
5.0 out of 5 stars Coleman Triton
18 September 2019
Verified Purchase
Come with a few scratches but apart from that it works great! Would definitely recommend this stove
Read more
Helpful
Comment Report abuse

Vinesh
2.0 out of 5 stars it's good when you want to use only one burner but in dual it's not efficient
25 November 2019
Verified Purchase
Second burner stop working after some time use.
Read more
Helpful
Comment Report abuse
There are 2 customer reviews and 3 customer ratings.
See all 2 customer reviews
Write a customer review

Eric J.
3.0 out of 5 stars Does anyone at Coleman actually test these things?
16 December 2016 - Published on Amazon.com
Verified Purchase
This camp stove is close to being good for my purposes, but comes up short in one important area. The burners generate a lot of heat, so if you just want to boil water this stove may workout fine. The biggest problem I have with it is on the other end of the spectrum: simmering. The issues are:
> It seems like most of what you get from the burner is Ultra High, Super High, Very High, and a small amount of Medium. You don't hit Low, which is a setting I use frequently, until just a teeny bit before you hit Off. So when I'm attempting to set the burner to Low, I often end up with Off instead, then I have to perform the lighting sequence again.
> The control knob has a fair amount of elasticity, so if I manage to set the burner to low, it self-resets, to some degree back to where it was. This is very frustrating! Because there is so little of the control knob range which is Low, the "bounce-back" makes it nearly impossible to do this without having to relight.
> The stove has a rounded bump near each corner, which serves as feet. Unfortunately, the feet are smooth metal, and so the sometimes HOT stove tends to slide around a lot. I added my own rubber feet, which helps, but due to the design (rounded feet), it's hard to get a lot of contact with the table, so it still slides more than I would like.
> I have had no problems with the piezo lighter working, but I don't like the button design. The button must be pushed in, horizontally, with a fair amount of force. However, because the stove likes to slide (see prior bullet point), this requires holding the back with one hand while pressing with the other. If, by chance, you had been cooking something on High, then your attempt to lower the heat accidentally turns the burner off, you will need to restart. If you're not careful where you grab the back of the stove, you could end up cooking your hand, along with dinner. A better design would have been a knob, which you turn, or a lever (or button) which you push DOWN (vertically), instead of their button which you push IN (horizontally).

Would I buy it again? No! I've had many Coleman stoves before and none have had the problems of setting the burner on Low, or with the knob bounce-back, so I know they can do it. This time, though, they didn't.
Read more
173 people found this helpful

Tracy K.
4.0 out of 5 stars Burners
9 March 2018 - Published on Amazon.com
Verified Purchase
I'm the type of consumer that generally reads all the negative reviews and if there's a common theme, I'll reconsider the purchase. This theme seems to be the insta-start button. When I first received the stove, I tried brewing a pot of tea before my camping trip. During the initial use, it appeared that only the right burner was igniting, I didn't understand this because I could physically SEE the spark from the igniter, it just wasn't producing a flame. I took it on the trip anyway because it was too close to the date to send it back and shop around for another stove when they ALL appeared to be ruffling someones feathers and I didn't have the time to 'trial and error' my experience. I do understand why some people may think the heat controls are a tad finicky, the thing about that is, I believe all portable stoves require a certain finesse to operate... in this case, you need to put a little pressure on the dial while you turn. If you are just haphazardly turning the nob, it will turn but it won't adjust the temp... I'm not convinced that this ISN'T a safety feature to prevent accidental temp switches (if that makes any sense). The grill 'grate' portion did start to bubble after use, which indicates it probably could have been made with a stronger material but if remaining lightweight was the end game then I could see why they opted for this one. I did realize AFTER my trip the the left burner would ignite under better conditions: 1. (user error) The gas needs to be turned UP HI initially! You need a solid flow of gas so it can reach the spark to ignite which 2. Might be difficult in super windy conditions but once it's lit, the wind shield will be sufficient enough to keep the flame going when you turn the heat down.
Read more
47 people found this helpful

Brookslyn
4.0 out of 5 stars Functional with some minor build issues, easily upgraded!
1 May 2019 - Published on Amazon.com
Verified Purchase
Simple, functional design with some build quality issues.

Con: Build quality lacking 1) burner top should sit on top of frame but construction had one side under frame and one on top causing warping in body and misfit in closure. I pried the frame out to fix this, which relieved the tension. (See pic) 2) the burners and ignition heads are poorly installed or designed to poor tolerances. One burner is close enough to igniter to cosistently ignite (see pic), the other is at a distance that requires more fuel to ignite (see pic)... not as good on near empty fuel tanks. Havent tried to fix this yet. The burners are also not level (see pic)... though that is a nit, more so when cooking with cast iron.

Mods: I bought this because many friends have this and it's a simple work horse. I did some simple upgrades to mine. 1) added cork stickers to feet to prevent sliding (see pic). I might drill out bottoms and use rubber tips in future. 2) added small round neodynium magnets to prevent wind shields from rattling when stowed (see first pic). 3) more importantly, added 3 magnets to the fuel line adapter (see pic). This really helps it from rattling around and banging into the ignition tips (see pic).
Read more

29 people found this helpful
Go to Amazon.com to see all 287 reviews 4.2 out of 5 stars
Get FREE delivery with Amazon Prime
Prime members enjoy FREE Delivery and exclusive access to movies, TV shows, music, Kindle e-books, Twitch Prime, and more.
> Get Started
Back to top
Get to Know Us
Make Money with Us
Let Us Help You
And don't forget:
© 1996-2020, Amazon.com, Inc. or its affiliates