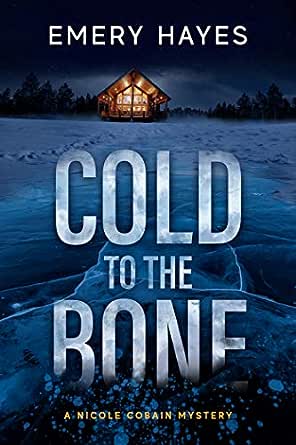 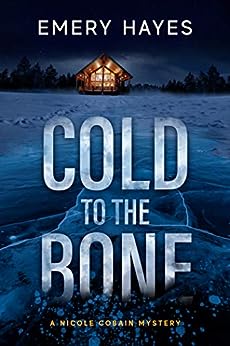 Cold to the Bone: A Nicole Cobain Mystery Kindle Edition

Praise for Cold to the Bone:
"A riveting read from first page to last."
--Midwest Book Review "Cold to the Bone is such a thrilling and atmospheric read. It felt as though I was 'working with' Sheriff Nicole Cobain to solve the murder and routing for her every step of the way. I can't wait to read more about her in this addictive series."
--Lisa Cutts, author of Don't Trust Him Cold to the Bone sizzles with angst-riddled characters testing their own limits, the suspense boiling over on a level that would make Craig Johnson's Longmire or C.J. Box's Joe Picket series proud. A crime-thriller extraordinaire.
--Jon Land, USA Today bestselling author of the Caitlin Strong series
--This text refers to the hardcover edition.

Emery Hayes is the author of the Nicole Cobain mystery series and the twice-monthly podcast, In My Town. Writing as Suzanne Phillips, her Young Adult novels command the attention of readers worldwide. She lives in Southern California with her family. --This text refers to the hardcover edition.

The brutal murder of a teenager and a deadly medical drama plunge a small-town sheriff into a vortex of treachery and greed in the debut novel of Emery Hayes's A Nicole Cobain Mystery series. --This text refers to the hardcover edition.
Read more

Brutally Honest Reviews
TOP 100 REVIEWER
4.0 out of 5 stars Good story but there were a few spot I thought it missed the mark
Reviewed in Australia on 12 August 2020
FIrst in a new series about Sheriff Nicole Cobain, a former Chicago detective who left her old life for a small Montana town, Cold to the Bone starts with the discovery of a murdered young girl on a frozen lake. The battle to preserve evidence in the icy cold is Nicole’s first challenge, and then she must deal with the girl’s family, wealthy tourists who don’t seem to want Nicole to actually find the murderer.

This is one of those stories that gets really complicated, really quickly. A figure from Nicole’s past has actually started off the whole chain of events, but this doesn’t become apparent until much later; it looks from the beginning that there are two different things happening. It’s a biotech thriller and a domestic violence thriller rolled into one, and I actually really enjoyed the way the author slowly but inexorably pulled the two apparently disparate threads together.

Nicole is an intriguing character; a single mother, she’s revealed at the beginning of the book to have some sort of romantic relationship with a physician/ME, but he never appears again in the story, which I found a bit disappointing. I actually wondered if it was a later book in a series from the background given of the relationship, but I think it would have been better to start it off with the two of them just striking sparks and to have the ME appear later on, more than once, to start a progression towards a romantic relationship… if that’s where the author wants to take things. It surprised me he wasn’t in the book more, actually; I would have thought Nicole might have wanted to consult him on some of the fairly dense medical terminology which came up later on. Now I’m not saying a lady sheriff might not understand such terminology, but it seemed like a waste of a character with a specialty that could have been useful, AND should have been present for a romance arc which had already been hinted at.

I liked this; it felt very realistic in the ruthless portrayals of Big Pharma and the characters were well-drawn in. Nicole’s uber-competent and an excellent heroine, but did get slightly robbed at the end of the story when someone else got to play saviour; I thought she deserved more than just to be a witness at the climax. A good story but fell down a little bit in the end and in the failure of the author to properly explore a romantic interest introduced early and then dropped. Four stars, and I would like to read more in the series.

Disclaimer: I received a review copy of this title via NetGalley.


Read more
Helpful
Comment Report abuse
See all reviews
Get FREE delivery with Amazon Prime
Prime members enjoy FREE Delivery and exclusive access to movies, TV shows, music, Kindle e-books, Twitch Prime, and more.
> Get Started
Back to top
Get to Know Us
Make Money with Us
Let Us Help You
And don't forget:
© 1996-2020, Amazon.com, Inc. or its affiliates