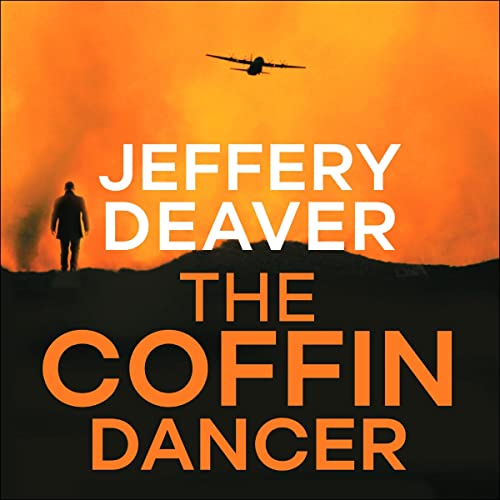 Lincoln Rhyme tracks down a terrifying serial killer in the second in the series. The Coffin Dancer, America's most wanted hit man, is back. He's been hired by an airline owner who wants three witnesses taken care of before his trial, and has got the first, a pilot, by blowing up his entire plane.

Enter quadriplegic ex-cop Lincoln Rhyme, who can find forensic evidence to hang a man in the smallest debris, and his assistant, Amelia Sachs. Their job is to keep the remaining two witnesses safe and to find the Coffin Dancer before he finds them. Because he will find them and anyone else who tries to get in his way.

Switch between reading the Kindle book & listening to the Audible narration with Whispersync for Voice.
Get the Audible audiobook for the reduced price of $10.99 after you buy the Kindle book.
Learn more about membership
By completing your purchase, you agree to Audible’s Conditions Of Use and Privacy Notice.
Sold and delivered by Audible, an Amazon company

4.5 out of 5 stars
4.5 out of 5
1,616 global ratings
How are ratings calculated?
To calculate the overall star rating and percentage breakdown by star, we don’t use a simple average. Instead, our system considers things like how recent a review is and if the reviewer bought the item on Amazon. It also analyses reviews to verify trustworthiness.

KayCee
5.0 out of 5 stars Five Stars
Reviewed in Australia on 21 July 2015
Verified Purchase
Great read and enjoyed this book as part of the collection.
Read more
Helpful
Report abuse

Christine Reynolds
4.0 out of 5 stars Loved the twists and turns in this story
Reviewed in Australia on 5 July 2014
Verified Purchase
Jeffrey deaver always surprises me, loved the story line and who couldn't like the characters good and bad, great read
Read more
Helpful
Report abuse

christine
4.0 out of 5 stars So far so good
Reviewed in Australia on 21 March 2015
Verified Purchase
Loving this series so far!
Read more
Helpful
Report abuse

Kjane
TOP 500 REVIEWER
4.0 out of 5 stars Looking forward to book three in this series!
Reviewed in Australia on 11 April 2020
This is the second book in the Lincoln Rhyme series and certainly packed full of action and a few twists that I did not see coming.
The Coffin Dancer is a professional assassin who has eluded all efforts of capture. He has been employed to take out witnesses for a crime boss before his trial and he is not going to stop until all witnesses are eliminated.
For Lincoln this appears to be very personal and he is throwing all of his brain power into trying to bring this man down. It also brings back some characters from the first book such as Amelia Sachs and Lon Selitto.
Read more
Helpful
Report abuse
See all reviews

FlyingDutchman-Scot
3.0 out of 5 stars Suspend Belief All Who Enter Here
Reviewed in the United Kingdom on 22 August 2016
Verified Purchase
I normally love the style of book - A fast-moving thriller / who dunnit with plenty of plot twists to keep you thinking. I found the characterisation fairly two-dimensional I can't say I particularly cared about the characters which isn't a good sign.
I did think about ditching the book after reading 30 pages but a good friend of mine who I normally have similar taste to had recommended the book and I pressed on regardless. The 50 pages mark came and went and so did the 100 pages mark and I should have listened to my inner critic which said cut and run!!
Without giving any of the plot away the elaborate steps taken at each juncture to achieve what seems an otherwise fairly easy objective requires you to suspend belief. Now in many thrillers the same could probably be said, but you are so engrossed in other aspects of the book that you do not notice the plot twists required to take you to where the author has in mind. This book is different, as you are constantly asking yourself "why would he do this", "how did a guy who is basically operating out of a rucksack arrange all these fantastic pieces of kit and elaboaate traps and plans without having a fairly substantial base to operate from".
It also seems fairly far-fetched how a civilian would have what seems to be limitless resources from the police and FBI to deliver bodies, analysis, evidence immediately at the drop of a hat. But add to the incredulity factor the conclusions that are drawn based on minimal information - it's just several steps too far.
I found myself questioning the book on almost every page rather than just getting into the story. Some parts of the book were well written and clever but only at a fairly basic level. I probably normally wouldn't post a 2 star review but I just felt like down by the glowing reviews that had gone before which I feel had misled me slightly.

Kindlelover
5.0 out of 5 stars Layer upon layer of mystery...what an ending!
Reviewed in the United Kingdom on 28 February 2017
Verified Purchase
Well what an introduction to Jeffery Deaver's writing! A fascinating mystery with a tremendous build up. And what an ending! Layer upon layer was peeled away, just when I thought I had come to the end of the mystery I found even more surprises!

SPOILER ALERT don't read this if you haven't read the book. The section about the altitude bomb was true to life. In the early 1970's my husband who worked for British Airways departed from Toronto on what seemed like a routine flight. Within 30 minutes or so flying east, the airline received a phone call from some nut stating that there was an altitude bomb on board which would detonate if the aircraft flew below 5000 feet. He (the nut) assured them (the airline) that upon receipt of a large sum of money he would tell them where the bomb was hidden and how to deactivate it. The airline had to take it seriously even though it was very unlikely so they turned the aircraft round and diverted to Denver obviously above 5000 feet. They landed without all the dramas that Percey encountered. The biggest problem after a safe landing was to find some aircraft steps tall enough to disembark 400 passengers from a 747! Eventually some engineering steps were found for this job. No bomb was ever found and the nut never contacted the airline again. I can't help wondering if the author used this story for inspiration.
Read more
One person found this helpful
Report abuse

Tham Chee Wah
4.0 out of 5 stars The twist at the end worth 5 stars
Reviewed in the United Kingdom on 3 September 2017
Verified Purchase
From the start till the end, these are cat-chase-mouse scenes. Non stop. You know there is a killer and the whole team goes after the killer. The killer is slick, uses a lot of tactics to play hides. The, there is Rhyme who is at his tail at every turn of a new chapter.

Then, there are the technical details of bombs, tactical squad ambush and the protection of the victims. From a detective's perspective, this book is well researched with many details, even minute details of how bombs are made, and the crime scenes search methodologies. I could not follow through, though. I was lost. Even the way how they get a plane on the air was so well described, it was nonetheless tedious for me to read.

But I liked the plot, the characters are vividly thought of. I could feel them, even to the extent of smelling their perspiration and their feeling of hopelessness. Each character is described with extreme care, even the killer, his killing instinct and the hate are creepy. Chill to the bones.

This is a good movie material, just like one of the novels, The Bone Collector, the chase in this story will make my palm sweat. Let's wait for the movie.
Read more
Report abuse

Strathie
5.0 out of 5 stars Very complicated coronary techniques used.
Reviewed in the United Kingdom on 7 August 2019
Verified Purchase
I Have previously read one of Mr Deevers books (The bone collector ) and found this so interesting that I had to obtain the "Coffin Dancer". I am glad I DID AS I thoroughly enjoyed it. I found that I was in the very room that Lincoln Rhind and Amelia Sachs were in. I also found that I was following the steps of the dancer as if I was by his side. The story grips one and cannot be put down. The technology of the criminologist is extremely interesting and one truest follow all the different techniques used and to try to read his thoughts. An excellent read.
Read more
One person found this helpful
Report abuse

I enjoyed the return of Sachs and Rhyme. The evolving character dynamic was great.

The plot was clever with some brilliant twists. To be honest, when I first understand the nature of the antagonist I was convinced I would be bored, but I was wrong.

The stakes are raised chapter by chapter. The villain is complex. Protagonists are put in danger.

As with The Bone Collector the side plots are appropriately weaved into the main plot and are resolved in a sataisfying way.

I've had to be very strong willed not to just jump into book 3.
Read more
Report abuse
See all reviews