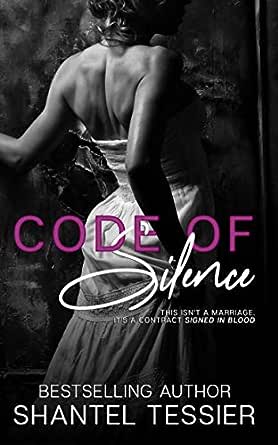 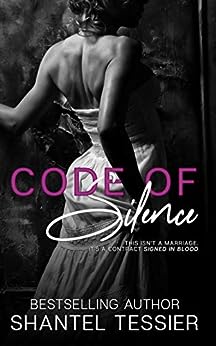 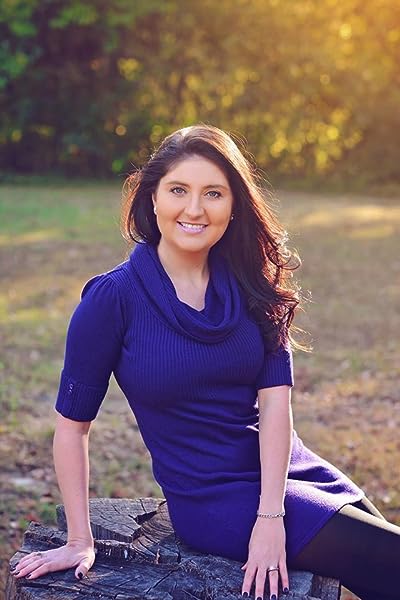 Those words describe my future husband. Who just so happens to also be my ex-boyfriend.

It’s complicated. Two years ago, he broke my heart when he left me to do his father’s bidding. After months of crying, I finally accepted he was gone and wasn’t going to look back. That maybe he’d never loved me at all. I never wanted to see Luca again.

Now a cruel twist of fate has signed me over to him in a heartless deal. I’m his. He thinks he did me a favor, but I feel like I’ve been given a death sentence. He doesn't want to get married because he still loves me. No, he did it for money. More power.

I’m going to be a mafia wife. And there’s only one way out of it. Death.

But as it turns out, someone else doesn’t want me to marry the ruthless Luca Bianchi. And if he has his way, I’ll see that early grave.

Due to mature content and themes this book is recommended for readers aged eighteen and over. Code of Silence is an arranged marriage and a complete standalone. This novel may contain triggers.

Tara Hartnett Reviews 💙
TOP 500 REVIEWER
5.0 out of 5 stars All you Mafia Lovers, this book is for you.
13 January 2020
Format: Kindle EditionVerified Purchase
If you love Mafia romances with a second chance at a happily ever after, then Code of Silence is DEFINITELY for you.
It’s intense,
It's dark,
It’s raw
Hits you with the feels.
Hella Epic Secondary Characters.

Dangerous and feared.
Those are the words that describe Luca, Luca who just happens to be Haven's ex-boyfriend.
Their Relationship is complicated to its max.
Let's take it back a bit without giving spoilers.
Two years ago, he broke my heart when he left me to do his father’s bidding. After months of crying, I finally accepted he was gone and wasn’t going to look back. That maybe he’d never loved me at all. I never wanted to see Luca again.
Now a cruel twist of fate has signed me over to him in a heartless deal. I’m his. He thinks he did me a favor, but I feel like I’ve been given a death sentence. He doesn't want to get married because he still loves me.
No, he did it for money.
More power.

There are plenty of layers to this story, plenty of secrets that are buried deep. The twists and turns are never ending and when the truths finally come to light, you’re left reeling. Code of Silence has everything you want from a mafia romance, from power plays, fighting, money making and deception. You’ll become so engrossed in this story that you won’t be able to put it down. Once I finished this book I was left wanting more of Luca's and Haven's Story.

I loved Luca and Haven’s story. It was intense and chaotic, but also emotional and passionate. Their love held so strongly for the other, even if they didn’t want to admit or fought against it. Let me just tell you their the seconding characters you'll all going to die for. Especially Nite and Mia, Jasmine, and those delicious Dark Kings. I cannot wait to experience all that of what the Kings are going to give us when their time comes to tell us their stories.

Shantel Tessier nailed it with Code of Silence, she just gets better and better with each book that she puts out into the world. She is always giving us the angst, the emotion, and the darkness we crave.

I voluntarily reviewed a complimentary copy of this book.

Melinda Benn
5.0 out of 5 stars 5 star read
13 January 2020
Format: Kindle EditionVerified Purchase
This book was absolutely fantastic. Shantel Tessier definitely knows how to draw you in from the first word till the last word. I devoured this book from the first page till the last.
Read more
Helpful
Comment Report abuse

amanda
5.0 out of 5 stars Amazing author
20 January 2020
Format: Kindle EditionVerified Purchase
Loved it, Shantel’s books gets better and better, Do yourself a favour and read all her books, amazing. Can’t wait for her future books.
Read more
Helpful
Comment Report abuse

The hot mess library
TOP 500 REVIEWER
3.0 out of 5 stars A dark, mafia read
18 January 2020
Format: Kindle Edition
Code of Silence is a dark, mafia read by Shantal Tessier. The story follows the characters Luca and Haven and the development of their relationship which is pretty complicated. We see the story through the eyes of both characters and the decisions they’ve made to get to where they are and like most relationships, nothing is as simple as you think.

Haven is predominantly a strong character, but at times I felt that her idealistic picture of Luca overshadowed who he really was as a person. She kind of knows from the beginning that Luca is part of the mafia and then gets all upset when he makes certain decisions. You do see the development as her as a character as the book goes on, but at points I did find her pretty selfish.
Luca is also unapologetic in what he had to do to keep not only his family safe, but Haven safe. There are moments in the book where he is quite cruel to Haven, but it certainly helps her to see who he is as a man and what he is up against.

There is a lot going on in this story, not only from the main characters but also from sub characters that have their own story to tell. The story between Haven and her mum was quite heart-breaking when you find out what went on there, as well as the story of other female characters (its not great being a female in the mafia)

Sexy scenes between the two characters are dark and steamy and overall it is a page turning, dark mafia book.

Books&Tea
TOP 100 REVIEWER
2.0 out of 5 stars 2 stars. Mild spoiler ahead.
5 February 2020
Format: Kindle Edition
I actually quite enjoyed the first few chapters of the book. The opening chapter set the tone of the story well and made me want to keep reading. I was most let down by the h - her attempts at defiance and rebellion felt really half-hearted and honestly, were boring to read (especially given that she was apparently considering suicide at one point). I expected more from her, more push back, more desperation and more attempts to thwart the situation on a level that matched the H’s brutal and intense character. Instead I found myself mostly irritated by her and her inability not to succumb to him and his d**k every time he tried to placate her. Maybe it’s because I’ve read so many mafia romances now and I’ve seen how damn good they can be, but this one left me wanting.
Read more
Helpful
Comment Report abuse

Rachel Osborne
TOP 500 REVIEWER
5.0 out of 5 stars Mafia never felt so good
13 January 2020
Format: Kindle Edition
Wow, what a book. This story began with young love and became the ultimate dark romance. Loved the build up and the angst that this story gave. I feel in love with the alpha male and sassy female characters. I want more. I devoured this book and I need more. The graphic violence and hot love scenes had me swooning and gripped to the book from page one. Shantel has created a Mafia masterpiece that will draw you in and wishing you were part of the story. I want more story, more information about all the characters and I want more books with the kings. Beautiful writing and a fantastic hot dark romance.
Read more
Helpful
Comment Report abuse
See all 13 customer reviews
Write a customer review

Go to Amazon.com to see all 277 reviews 4.5 out of 5 stars
Get FREE delivery with Amazon Prime
Prime members enjoy FREE Delivery and exclusive access to movies, TV shows, music, Kindle e-books, Twitch Prime, and more.
> Get Started
Back to top
Get to Know Us
Make Money with Us
Let Us Help You
And don't forget:
© 1996-2020, Amazon.com, Inc. or its affiliates