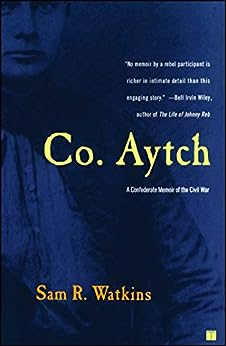 Bell Irvin Wiley Author of The Life of Johnny Reb No memoir by a rebel participant is richer in intimate detail than this engaging story.

Margaret Mitchell From Gone With the Wind Letters A better book there never was. --This text refers to the paperback edition.

Samuel "Sam" Rush Watkins (June 26, 1839 - July 20, 1901) was a noted Confederate soldier during the American Civil War. He is known today for his memoir Company Aytch: Or, a Side Show of the Big Show, often heralded as one of the best primary sources about the common soldier's Civil War experience. Watkins was born on June 26, 1839 near Columbia, Maury County, Tennessee, and received his formal education at Jackson College in Columbia. He originally enlisted in the "Bigby Greys" of the 3rd Tennessee Infantry in Mount Pleasant, Tennessee, but transferred shortly thereafter to the First Tennessee Infantry, Company H (the "Maury Greys") in the spring of 1861. Watkins faithfully served throughout the duration of the War, participating in the battles of Shiloh, Corinth, Perryville, Murfreesboro (Stones River), Shelbyville, Chattanooga, Chickamauga, Missionary Ridge, Resaca, Adairsville, Kennesaw Mountain (Cheatham Hill), New Hope Church, Zion Church, Kingston, Cassville, Atlanta, Jonesboro, Franklin, and Nashville. Of the 120 men who enlisted in "Company H" in 1861, Sam Watkins was one of only seven alive when General Joseph E. Johnston's Army of Tennessee surrendered to General William Tecumseh Sherman in North Carolina April, 1865. Of the 1,200 men who fought in the First Tennessee, only 65 were left to be paroled on that day. Soon after the war ended, Watkins began writing his memoir, entitled "Company Aytch: Or, a Side Show of the Big Show." It was originally serialized in the Columbia, Tennessee Herald newspaper. "Co. Aytch" was published in a first edition of 2,000 in book form in 1882. "Co. Aytch" is heralded by many historians as one of the best war memoirs written by a common soldier of the field. Sam's writing style is quite engaging and skillfully captures the pride, misery, glory, and horror experienced by the common foot soldier. Watkins is often featured and quoted in Ken Burns' 1990 documentary titled The Civil War. Watkins died on July 20, 1901 at the age of sixty-two in his home in the Ashwood Community. He was buried with full military honors by the members of the Leonidas Polk Bivouac, United Confederate Veterans, in the cemetery of the Zion Presbyterian Church near Mount Pleasant, Tennessee. --This text refers to an alternate kindle_edition edition.

4.6 out of 5 stars
4.6 out of 5
89 global ratings
How are ratings calculated?
To calculate the overall star rating and percentage breakdown by star, we don’t use a simple average. Instead, our system considers things like how recent a review is and if the reviewer bought the item on Amazon. It also analyses reviews to verify trustworthiness.

City Pigeon
5.0 out of 5 stars US Civil War Memoirs
Reviewed in the United Kingdom on 29 January 2016
Verified Purchase
A must for everyone interested in the US Civil War. Tells the story of what it was like to be an ordinary Confederate soldier fighting in the lines. Describes the deprivations the fighting men suffered in the name of the cause and what it was like to lose friends to the carnage of battle.
Read more
Report abuse

sby
5.0 out of 5 stars Quite simply brilliant.
Reviewed in the United Kingdom on 27 July 2014
Verified Purchase
Quite different from the history reviews, written by an actual soldier and written from his simple view of the war, hence no political stance. A simple cut and thrust view of a simple man in a gone by age of war. Quite simply brilliant
.
Read more
Report abuse

John Welch
5.0 out of 5 stars Five Stars
Reviewed in the United Kingdom on 12 September 2017
Verified Purchase
First class. Tells us the everyday things that most histories overlook as unimportant.
Read more
Report abuse

R. Nicholson
4.0 out of 5 stars Memoirs of a Rebel soldier
Reviewed in Canada on 19 February 2003
Verified Purchase
This is a wonderful book by Sam R Watkins: a confederate soldier that survived the entire American Civil War (1861-1865). Watkins was a private who joined the Tennessee Army and with whom he participated in every battle and skirmish that the regiment was involved. He received several wounds but never any serious enough to keep him out of action for very long.
These memoirs where written about 20 years (circa 1882) after the last shot was fired and so there are some minor errors in the facts regarding some of the events described. The descriptions are short individual vignettes of battles, marches and daily life associated with the Confederate Army.
What makes this account of the civil war special is the quality of the story telling. The language has a sensitivity to it that seems to capture your imagination and emotions. It is, of course, at times explicitly descriptive, regarding some of the battles and their aftermath, but there are passages that are movingly sad and others that are quite humorous: tales of how thousands of men have to learn to live together and adapt to survive prolonged stressful conditions. The narrative description of the deprivation and dilapidation of the Confederate Army at wars end is heart rendering; men in filthy, tattered clothes, many barefoot and starving.
I learned several things from this work; for instance, I was unaware of the numerous small battles that never claimed the infamy of Gettysburg, Antietam, Manassas etc. but were none the less just as vicious as their larger counterparts. Daily skirmishes were not an infrequent occurrence. I was unaware previously of the frequent court-martials and firing squads used to deal with the relatively large number of deserters from the Southern Army. Also interesting was the acute awareness and acumen of the lowly private soldiers regarding the circumstances surrounding some events that were looming in their immediate future; i.e. battle formations, forced marches, incompetent leaders etc. If the generals had the instincts that some of the "regulars" did, a lot of the carnage may have been substantially reduced or avoided.
The only negatives are (thus the loss of one star)
1.) there are very few dates given(you assume the book runs chronologically)
2.) a map would have made it so much easier to follow the marches and battles locations
All in all a compelling work: personal insights that you just don't find in larger accounts of this period.
Highly recommended if you have any interest in the Civil War era.
Read more
Report abuse
See all reviews
Back to top
Get to Know Us
Make Money with Us
Let Us Help You
And don't forget:
© 1996-2021, Amazon.com, Inc. or its affiliates