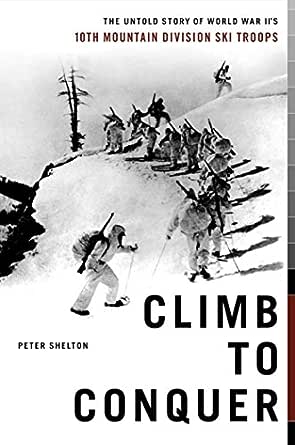 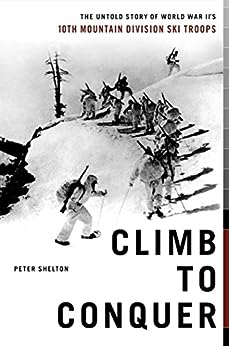 David Breashears Author of "High Exposure, " Expedition Leader and co-director of the Imax film "Everest" Peter Shelton's "Climb to Conquer" is the story of the birth of American mountain adventure as we know it, brought together with riveting, little-known World War II history. Shelton puts us right alongside these endearing young mountain men as they learn to ski, climb, and survive in a bitterly cold and hostile environment. Their story will have you grinning one moment and gripping your chair the next, as they engage in mischief-making adventures, or ultimately climb a sheer cliff into enemy territory in the dead of night. It's a fantastic story, superbly told, and I highly recommend it.

Dick Bass Co-Author of "Seven Summits" and developer of Snowbird Ski Resort Thank goodness the story of the 10th Mountain Division is finally being told. I've had the distinct privilege and benefit of knowing and learning from a number of those described and quoted within these pages, and "Climb to Conquer" brings their extraordinary achievements to life, showing how their battlefield qualities of courage, perseverance, and resourcefulness also served them well as they became the backbone of the post-World War II evolution of American skiing and outdoor recreation. Peter Shelton tells their story so vividly, poignantly, and inspiringly that I couldn't put it down.

Otto Lang Noted Filmmaker, author of "Around The World in 90 Years, " and prewar Sun Valley Ski School director Reading Peter Shelton's book "Climb to Conquer" is a revelation. Shelton, with his lucid, informative, and entertaining style of writing, vividly brings back the memory of many of the 10th Mountain participants. It's a minutely researched and well-documented piece of work, worthy of one's while to read, with ample rewards.

Russell Martin Author of "Beethoven's Hair" and "Picasso's War" The story of the army's 10th Mountain Division -- the ski troops -- and the decisive role it played in driving the Nazis from Italy is one of the most fascinating sagas of World War II. Peter Shelton, who writes as beautifully as he skis, tells it wonderfully. "Climb to Conquer" is a book about young men, now grown old, who have much to teach us about the immense importance of friendship, the collective nature of courage, and the transcendent gift of high mountains. --This text refers to the paperback edition.

Peter Shelton has been a contributing editor and columnist at Ski magazine (where he first wrote about the 10th Mountain Division), as well as a correspondent for Outside magazine since 1984. He lives in Montrose, Colorado. --This text refers to the paperback edition.

4.8 out of 5 stars
4.8 out of 5
73 global ratings
How are ratings calculated?
To calculate the overall star rating and percentage breakdown by star, we don’t use a simple average. Instead, our system considers things like how recent a review is and if the reviewer bought the item on Amazon. It also analyses reviews to verify trustworthiness.

Jim Harper
5.0 out of 5 stars "Climb to Conquer" = A Top Tier Read
Reviewed in the United States on 14 November 2015
Verified Purchase
I read this superb book on loan from my daughter's boyfriend who fought with the 10th Mtn Div in both Iraq and Afghanistan in the recent past. I was mesmerized by learning the early beginnings of this distinguished Army Division. I am thankful we had so many terrific skiers in America, and our WWII allies countries, that formed the backbone of this dynamic unit that was the Tip of the Spear for the Allied Forces breaching the Axis
" Winter Line " in Italy during the 1943-1944 Winter campaign. They were the first unit to reach and cross the Po River thus cutting off the German retreat. A Must Read for those who like to read about American ingenuity at it's finest. If you like a true picture off WWII history in the Southern Europe Theater of Operations, this is it. Look no further.
Read more
5 people found this helpful
Report abuse

Mannie Liscum
4.0 out of 5 stars Perfect mix of skiing, mountaineering and combat
Reviewed in the United States on 13 February 2005
Verified Purchase
Climb To Conquer: The Untold Story of World War II's 10th Mountain Division Ski Troops is an engaging story of one the US Army's most specialized organizations of WWII. Outdoor and skiing enthusiast Peter Shelton has done the men of the 10th Mountain Division justice with Climb To Conquer. Unlike the more recent, Boys of Winter by Charles J. Sanders, Shelton's book is a solid piece of historical literature.

Climb to Conquer is divided into four basic topical sections:

1) The Prologue and first seven chapters (with the exception of chapter 5) are dedicated to telling the story of how the "US Ski Troops" were conceived, formed and trained. Shelton thankfully opts not to present Climb To Conquer with the who's-who of skiing approach that Sander's took with his book. Instead Shelton gives background information about the genesis of the ski troops (initial Army outfit being the 87th Mountain Infantry Regiment) and its most vocal and active proponents (C. Minot "Minnie" Dole and no less than Army Chief of Staff George C. Marshall) within a context of the pre- and post-Pearl Harbor US military without cluttering it with unnecessary name dropping and ski-laden references.

2) The second section, which can be seen as being comprised of Chapters 5 and 8-13, is the "battle meat" of the book. While Chapter 5 sits physically in the middle of the first topical section of the book it in fact tells the story of the first armed actions of the 87th Mountain Regiment on Kiska - one of the Aleutian Islands. This is a fascinating story told well by Shelton. Charged with driving Japanese defenders from the Island, the 87th spilled its first blood on Kiska. Unfortunately Kiska represents a tragedy in the history of the 10th Mountain Division since the casualties sustained were not the result of Japanese defenders (who had vacated the island weeks earlier in a stealthy escape through a US Navy blockade worthy of its own retelling) but rather from friendly fire of fellow 87th soldiers. Confusion and chaos reigned on Kiska and none of the survivors forgot their terrible experiences.

Chapters 8-13 detail the exploits of the 10th Mountain Division as it entered the ETO in late 1944. Shelton does a good job describing the actions of the 10th (and other units of the US Fifth Army under Maj. Gen. Mark Clark) in the Italian Appennine Mountains, through to the Po River Valley, and the final race with the Wehrmacht to their supposed Alpine Redoubt in the Austrian Alps. Shelton's prose in the "battle chapters" is such that it holds the readers attention and draws then along with the story. Very well written from a pure reading standpoint.

3) The third section of the book is represented by a single chapter (14) and details the time men of the 10th spent in the European mountains after their fighting was over. While there is not a lot of text associated with this section it provides an interesting tie-in to the final section of the book.

4) The fourth and final section (Chapters 15 and 16) of the book describes the exploits and accomplishments of the veterans of the 10th at home after the war. Again Climb To Conquer, unlike The Boys of Winter, does a good job detailing how men of the 10th were instrumental in the establishment of the US ski industry. As was the case with his discussion of the formation and training of the mountain troops, Shelton places this final section within the larger context of how these things came to pass in many ways because of the training and combat experiences of the 10th veterans. Sanders failed to do this with The Boys of Winter. Moreover, Shelton doesn't limit his post-war accolades of the 10th Vets to their influence on the ski industry but rather makes a strong point of the critical importance of their work on environmental and conservation issues. These were mountain-men who had seen the devastation of man in war and vowed to protect nature's beauties. This final section provides the most unique sub-story to the history of the 10th Mountain Division.

Concluding remarks: While the sub-title (The Untold Story of World War II's 10th Mountain Division Ski Troops) of Climb To Conquer is misleading - this is certainly not an untold story as many books about the 10th have proceeded Shelton's book, Peter Shelton has crafted a sound piece of unit history that also represents a noteworthy human story. Climb To Conquer is an easy-to-read, hard to put down and a solid 4 stars.
Read more
18 people found this helpful
Report abuse

WalterFleming
5.0 out of 5 stars 10th Mountain Divion Ski troop history
Reviewed in the United States on 5 November 2020
Verified Purchase
My late husband was a decorated Mountain man in Italy. I got this book to add some of the history about his service that I am preparing for my Great grandson. I learned about this book after reading "The Last Ridge". WWII veterans didn't talk much about their service once they were home. I did know about the night climb. It is only recently that we are hearing more of those stories of 75years ago.
Read more
Report abuse

Kindle Customer
4.0 out of 5 stars Good History for Ski Buffs as well as Warfare
Reviewed in the United States on 5 April 2020
Verified Purchase
Interesting content, covering the history of the unit and showing the impact of the unit members after the war on the outdoor recreation industry, including skiing. If it wasn't for this division we would not have skiing as it is in the United states.
Read more
Report abuse
See all reviews
Back to top
Get to Know Us
Make Money with Us
Let Us Help You
And don't forget:
© 1996-2021, Amazon.com, Inc. or its affiliates