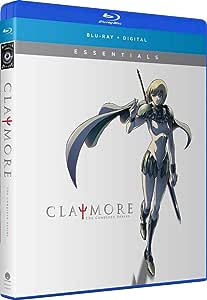 View our Christmas Gifting Deals for selected Movies and TV series.
Click to find out more.

A brutal scourge stalks the land. Yoma, monsters driven by a hunger satisfied by only one quarry - Humanity. The dark breed knows but a singular foe: Claymore. Human-Yoma hybrids of extraordinary strength and cunning, the Claymores roam from skirmish to skirmish delivering salvation by the edge of a blade. Thus begins the twisting tale of Clare, one such sister of the sword driven by pain in both victory and defeat. A child silent and suffering hidden in her past, Clare's march toward vengeance unfolds along a path marked by violence, solitude and scorn. In a land where even the predator is prey, the haunted hearts of hunter and hunted alike wear the scars of the age.

4.7 out of 5 stars
4.7 out of 5
706 global ratings
How are ratings calculated?
To calculate the overall star rating and percentage breakdown by star, we don’t use a simple average. Instead, our system considers things like how recent a review is and if the reviewer bought the item on Amazon. It also analyses reviews to verify trustworthiness.

Suhayb
5.0 out of 5 stars Amazing show
Reviewed in the United Kingdom on 13 January 2020
Verified Purchase
A show about yoma who are monsters able to take on the form of humans and enjoy eating innards. Unable to realise which is a human or yoma in disguise, claymores (Half human half yoma) are sent to kill yoma. The claymores are feared by humans, rakki, a boy whose family gets killed and sees a certain claymore slay the yoma who kills his family, thinking of the claymore as his saviour he joins her on her journey towards many different towns to slay yoma.

Not a very popular show and deserves more credit.

In my opinion the show would look even better on Bluray but the price takes a sudden spike, considering that even this regular version gets you by.

Mr. B. Smith
4.0 out of 5 stars Enjoyed the middle section
Reviewed in the United Kingdom on 19 June 2013
Verified Purchase
This series was an entertaining watch, though a few relationships felt a little contrived and I had to force myself through the last few episodes. The individual claymores, rankings and the organisation are revealed gradually and I found this to be a strength in the series. Clare's past is an interesting story and, for me, explained her relationship with Raki, but didn't make it feel any more genuine. The fighting is well animated, the gore being frequent but tasteful, and each claymore's strengths or powers keep the battles fresh.

People have mentioned that this series seems to progress into boss battles, this is true, and a lot of the later battles are fought by previously unknown characters who I just couldn't care about.

The English dub isn't amazing, and Raki is the most annoying character in the history of television...seriously!..maybe switch to the Japanese track.

Overall it's worth watching. The animation is beautiful and though the story has a mixed pace, it' still better than a lot of anime.

As a product, this is just an inch thick plastic case with the two double sided hinged holders inside. It's held together well so far but it does feel a little flimsy.
Read more
One person found this helpful
Report abuse

Kindle Customer
5.0 out of 5 stars Female knights with special powers!
Reviewed in the United Kingdom on 11 September 2010
Verified Purchase
I checked this out as I like anything knights/ninjas/samurai based and thought the idea of female knights with special powers called claymores would be fun (I enjoyed Visionaries as a kid). The first couple of episodes were nicely animated but didn't really have me gripped as I thought the boy was a bit whiny and the concept of killing the same monsters every episode potentially dull. Then there's the second story-arc which follows another Claymore and has a neat twist at the end that got me very interested. The third arc goes back to the title-claymore and it becomes clear it's not going to be the same type of monster every week. It also becomes clear that the Claymore organisation is not as noble as it first appeared and from this point on the show goes from strength to strength with some excellent battles and character development. The show only drops off in quality towards the end where it becomes clear the writers rush in order to finish the show, whereas they would have been far better off leaving it unresolved in the hope of finishing it off with a seond season or OVA. Hopefully one day we'll get to see a reinterpreted ending in the stlye of Fullmetal alchemist: Brotherhood. Otherwise we'll have to settle with this great action series with a slightly different setting and approach to most of the shounen anime around.
Read more
5 people found this helpful
Report abuse

Christian Aron
4.0 out of 5 stars Humanity vs Monsterness
Reviewed in the United Kingdom on 13 March 2013
Verified Purchase
Was advised the serie by a friend using my weakspot to lure me to it...
Watched it nearly in a row. Universe and chara design are very interesting. The serie starts fair and the plot evolves cleverly.
Graphic and animation are very good, as well as music. Aside from very little drops of it, most of the characters and their behavior are not clichés at all, which is refreshing.
Mood is oppressing and filled with uneasyness yet not too much overdone in this direction anyway.
Of course, lot of depicted violence, blood and such, so not advised for all audience, but it's a clearly solid anime serie with its own soul and personnality.
If you like epic stories with good swordfights and fantasy, this one will fill your needs.
Read more
One person found this helpful
Report abuse

Alexander House
5.0 out of 5 stars One of the best series I've seen so far
Reviewed in the United Kingdom on 19 May 2011
Verified Purchase
I haven't seen a lot of series in the past, especially action series, but this one definitely marked me.
I love the soundtrack, the design and the palette that is used to describe certain scenes.
I don't necessarily agree with what some people say about character development, as I believe each character had it's own way of developing. I do believe that Raki was a strange kind of kid and although his story reminisces in some periods of the story with someone's story, he does get to be a little bit annoying. But every other character develops very nicely. I believe that even characters you don't see often, develop their stories and personalities in their own little way, by saying one line, meaningful enough for you not to need anything else.
It does have its fair amount of blood and gore and if you're not into that, then you will not like this series, but I believe that if you tend to like action stories and moreover action stories with girls, then this is definitely for you.
Read more
2 people found this helpful
Report abuse
See all reviews
Get FREE delivery with Amazon Prime
Prime members enjoy FREE Delivery and exclusive access to movies, TV shows, music, Kindle e-books, Twitch Prime, and more.
> Get Started
Back to top
Get to Know Us
Make Money with Us
Let Us Help You
And don't forget:
© 1996-2020, Amazon.com, Inc. or its affiliates