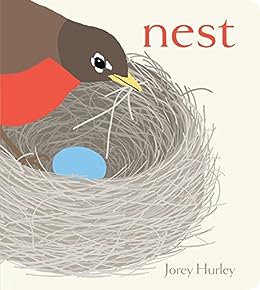 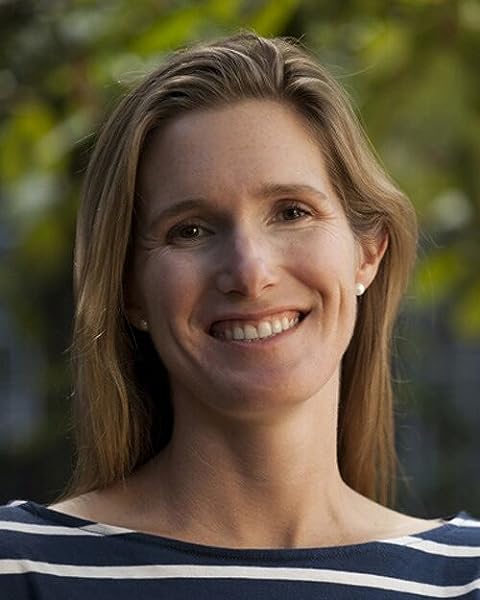 Newcomer Hurley lets her bright, clean illustrations do her storytelling, limiting the text on each page to a single, evocative word. The first spread—“nest”—accompanies two robins guarding a precious blue egg. Like silk-screened images, Hurley’s digitally created artwork represents the birds and the trees they live in with flat, sharply delineated areas of color on matte pages; airy white space in the compositions duplicates the freedom in which the birds live and soar. Although the forms are stripped down, some small details are preserved, like the intricately woven twigs of the nest and the sparks of light in the birds’ eyes. “Grow” shows the robins bringing worms to their nestling amid a bower of blossoms; throughout, Hurley celebrates the changing seasons. Although it suggests itself as a bedtime book, the arc of the story is not day moving into night, and the page that says “sleep” is not the last one—with an “Awake,” the next spread shows the rising sun. Robins meet other robins and start again where they began: “Nest.” A handsome, disciplined debut. Ages 3–7. ― Publishers Weekly

Written and illustrated by Jorey Hurley

In this stunning debut, we meet a pair of robins and their egg. We watch the parents incubate and hatch the egg and teach the baby bird to survive and fly. Seasons change, colors change. The family faces danger, but ultimately finds safety and comfort. This story is told primarily through the crisp illustrations that have a light, airy quality. The narrative includes only fifteen words, one on each spread, which adds to the dramatic impact: “Nest…warm…hatch….grow…jump….” The conceptual space between each page turn invites readers to thread together the story and imagine each step in the bird’s journey. The illustrations evoke the eloquent simplicity of a Japanese woodblock print while the frontispiece depicts clusters of robin’s eggs, reminiscent of clouds in a Georgia O’Keefe painting. Every page resonates with a vision that is both ethereal and quotidian. The birds are depicted naturalistically and an author’s note includes factual information about robins and their nests. Nest’s beauty and originality will stand up to countless re-readings. ― School Library Journal, *STARRED --This text refers to the hardcover edition.

Jorey Hurley studied art history at Princeton, received her law degree at Stanford, and studied design at FIT. She worked as a textile designer for Hable Construction in New York City and is now based in San Francisco, where she lives with her husband and their two small children. Nest, her debut, was called “stunning” in a starred review from School Library Journal. Fetch, her second book, was called a “delight” by Publishers Weekly in a starred review. She is also the author of Every Color Soup and Skyscraper. Visit her at JoreyHurley.com. --This text refers to the board_book edition.

4.7 out of 5 stars
4.7 out of 5
90 global ratings
How are ratings calculated?
To calculate the overall star rating and percentage breakdown by star, we don’t use a simple average. Instead, our system considers things like how recent a review is and if the reviewer bought the item on Amazon. It also analyses reviews to verify trustworthiness.

My Four Girls
5.0 out of 5 stars Sweet pictures and story
Reviewed in the United States on 22 August 2016
Verified Purchase
Sweet pictures and story, with soft colors, uncluttered pages, and few words, this was purchased for a friend with a robin theme for her new baby, and she was very pleased. It came with a mark on the cover, which did show...the cover is cream. I tried to clean it as best I could and gave it anyway. There was no time to exchange it, as the shower was the next day. I would have loved to see it come shrink-wrapped, with such a light cover. This does not, however, take away, or reflect badly on the author or printer. The book was adorable!
Read more
One person found this helpful
Report abuse

My 2 Cents
5.0 out of 5 stars Perfect book for Spring
Reviewed in the United States on 12 March 2014
Verified Purchase
What a perfect book to welcome the return of the robins after our long, cold winter. In Nest, author and illustrator Jorey Hurley, has created a lovely book that outlines the year of a robin family, beginning with the parents, a nest and their egg. After the egg hatches a tiny, hungry baby bird is born, the parents feed it, teach it to fly and to fend for itself. As the seasons change, the illustrations beautifully reflect their changes. The baby bird then comes full circle one year later returning to the area, finding a mate and building their own nest, repeating the life cycle.

There is only one word on each page, but that is all that is really needed engage a young child and talk about what the birds are doing as you turn each page. The illustrations are crisp, and beautiful. A truly amazing debut book that will please young children and adults alike, as they follow the journey of the robin and the change of the seasons.

Hilltop Granny
5.0 out of 5 stars Delightful!
Reviewed in the United States on 7 April 2019
Verified Purchase
A delightful beautifully illustrated book that's fun to read while educating the little ones to the birds around us. Words and pictures follow the Robins building the nest and their family. Just lovely. Grandchildren 1 and 2 years old loved it.
Read more
Report abuse

Kate
5.0 out of 5 stars Timeless wonder for all ages
Reviewed in the United States on 8 February 2014
Verified Purchase
The crisp, detailed yet simple in the best way, and colorful illustrations paired with a single yet completely perfect word on each page create a compelling story as well as a work of art. My 17 month old, my 4.5 year old, and their grown up parents all love this book equally. It is a favorite at bed time (every night since it arrived) and I have already ordered it for future baby gifts and birthday presents. The illustrations are art worthy of hanging on the wall and the story is touching and engaging. Possibly the best new children's book of the year!
Read more
16 people found this helpful
Report abuse

Amazon Customer
4.0 out of 5 stars Great book for spring!
Reviewed in the United States on 18 May 2021
Verified Purchase
Great book for spring. Pages are beautiful images. Helped add a few new words to my 21 month old sons vocab!
Read more
Report abuse
See all reviews
Back to top
Get to Know Us
Make Money with Us
Let Us Help You
And don't forget:
© 1996-2021, Amazon.com, Inc. or its affiliates