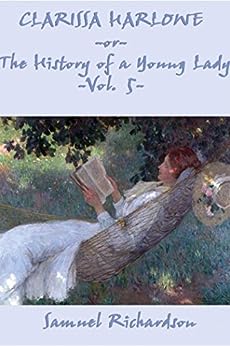 Clarissa Harlowe, or The History of a Young Lady Kindle Edition

fm.author_biographical_note1 --This text refers to an alternate kindle_edition edition.

3.0 out of 5 stars
3 out of 5
17 global ratings
How are ratings calculated?
To calculate the overall star rating and percentage breakdown by star, we don’t use a simple average. Instead, our system considers things like how recent a review is and if the reviewer bought the item on Amazon. It also analyses reviews to verify trustworthiness.

Martin Grundy
3.0 out of 5 stars A masterpiece, worth the effort of battling with the unfamiliar language and the annoying misprints
Reviewed in the United Kingdom on 31 January 2016
Verified Purchase
This is a masterpiece, so I would give it five stars for literature, but in this edition it is very poorly proof read and I would give it one star as an eBook. Consequently, as an average, I have given it three stars.

In printed form, the work would be in nine volumes, so at the extremely reasonable price of £1.42 for the complete eBook of all nine volumes, I can have no complaints. However, I did come across over 320 proof reading errors, which is still more than 30 per volume.

Samuel Richardson wrote in the 1740's. Some of the vocabulary is unfamiliar and many of the sentences are extremely long. Coupled with the lack of modern punctuation which makes it difficult to know when speech is being reported, making sense of the text can be quite challenging, but I assure you that it is worth the effort.

Unfortunately, the printing errors trip you up, and you lose where you are in the sentence while you try to work out what the misprinted word is supposed to be. This is, of course, very irritating and may put the reader on edge in anticipation of stumbling over the next incomprehensible quirk of the text.

The literary format is one that I have not come across before, though I am sure there must be many other examples. The entire story is told as a series of letters between the various characters. This provides the reader with insight into the opinions of the letter writer, prejudices and all, and is a marvellous source of suspense. We know what the character is thinking but, due to the private nature of the letters, we also know that the other characters (apart from the recipient of the letter) do not have that same knowledge.

I started reading the collection in June and finished it in December - quire the longest I have spent on a "single" book. I was surprised that it did not become dull. There was always some tension between what the letter writer intended to do or understood to be the case, and what turned out to be the truth. I always wanted to have this tension resolved and to know what would happen next.

The title of the book "Clarissa Harlowe, or The History of a Young Lady" tells you all you need to know to begin with, and it would be wrong of me to reveal any of the details of the plot. All I will say is that you can trust the author to complete the story by the end of the ninth book.

In this edition, there is a curious epilogue by Samuel Richardson. He has clearly received some stinging criticism from some of his readers and so he writes a justification for using the "series of letters" technique and for ending the narrative in the way he does.

TL Clark
3.0 out of 5 stars What a limp lettuce!
Reviewed in the United Kingdom on 22 April 2016
Verified Purchase
OMG! What a drip! Even for the time, this young lady takes the biscuit. Modesty and piety can perhaps be taken too far.

So, firstly I should warn you this book's claim to fame is that it is (allegedly) the longest novel ever written in the English language.
I wish I'd known this first.

Secondly, it is epistolary (it's all written as letters between friends).

Thirdly, it's a tragedy; don't expect a happily ever after.

It took me ages to get through this book.
I didn't find the old fashioned language particularly challenging, but others might.

What's it about?
An unbelievably pious, perfect specimen of her sex named Clarissa Harlowe.
Her family imprison her, and try to force her to marry an oaf.
Then her other suitor treats her abominably. Never was there a greater libertine than Mr Lovelace, surely!
That's pretty much it.

*spoiler alert* I wish I could choose to die at whim like this girl. How convenient!? :-/

So, this book feels like it was written by a vicar, perhaps as a result of his sermons falling on deaf ears.
It is a moralistic tale of how nice girls should be good and forever obey their parents.
And men shouldn't be beastly.

I feel quite good about myself for reaching the end, but only because it was a bit like running a marathon.
Read more
Report abuse

Amazon Customer
4.0 out of 5 stars Beautiful, if you can cope
Reviewed in the United Kingdom on 1 August 2016
Verified Purchase
If you had a really good story, told stories really well and got paid for telling stories - how would you tell a story?
Possibly by going on and on telling the story until the audience wouldn't pay you any more. It's hard to believe Richardson stopped for any other reason.
This is a good story and told very well. It's almost ridiculously easy to read as long as you don't look up and see how much higher you have to climb. It's about 2.5 times the length of War and Peace and has the plot-complexity of Peter Rabbit but the way it's written entirely in letters between the characters involved makes for short(ish) and punchy 'chapters' so you can put it down at any time. There's no way you'll finish this at one sitting so you'll have to! By the same token, when you pick it up again - and you will want to - the whole 'he said', 'she said' nature makes it very easy to get back into the feel of it. The feel of it is awesome.

Like War and Peace this is a feast. Unlike that, it's served in small dishes. Either way, you'll need a big appetite.
If you can't face it - Bader's Haiku U summaries it and it's charm:
To Miss Harlowe, send help;
I've been ravished in book six,
With three more to go.
Read more
Report abuse

There's no paragraphs in the whole book because someone has just copied and pasted the text in a very bad way. Plus it's not book shaped. It's a strange wife shape. Also there are no margins at all....

Very strange and really takes the fun out of trying to read it. Gave up after a few pages.
Read more
Report abuse

Amazon Customer
2.0 out of 5 stars Not really impressed with the size and layout
Reviewed in the United Kingdom on 2 March 2020
Verified Purchase
Felt like I was reading school essays, and not an easy book to handle
Read more
Report abuse
See all reviews
Back to top
Get to Know Us
Make Money with Us
Let Us Help You
And don't forget:
© 1996-2021, Amazon.com, Inc. or its affiliates