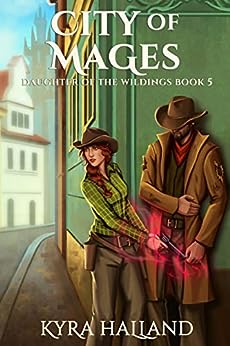 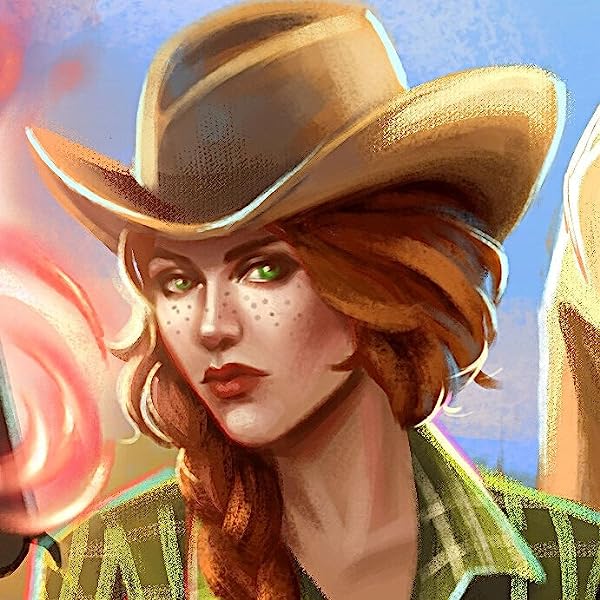 City of Mages (Daughter of the Wildings Book 5) Kindle Edition

by Kyra Halland (Author) Format: Kindle Edition
See all formats and editions
Sorry, there was a problem loading this page. Try again.
A nightmare come true - Silas is captured by mage hunters. Determined to rescue the man she loves, Lainie braves the perilous crossing through the Gap to follow him and his captors into the mage-ruled land of Granadaia.There, she discovers a betrayal beyond imagining and a deep-rooted conspiracy that threatens the safety and freedom of the settlers in the Wildings. Alone in a strange land, with no one she can trust, Lainie must find a way to free Silas and put an end to the danger facing their beloved Wildings.City of Mages is Book 5 in the innovative Daughter of the Wildings epic romantic fantasy-western series. Contains language and violence.
Read more
Previous page
Next page

Kyra Halland has always loved fantasy. She has also always loved a good love story. She combines those two loves - like chocolate and peanut butter! - by writing the kinds of romantic fantasy novels she loves to read. Complicated, honorable heroes; strong, smart, feminine heroines; magic, romance, and adventure; deep emotion mixed with a dash of offbeat humor - all of these make up Kyra Halland's worlds. Kyra Halland lives in southern Arizona. She's a wife, mom and mom-in-law, proud grandma, and devoted servant to three cats. --This text refers to the paperback edition.

Kyra Halland writes the kinds of romantic fantasy novels she loves to read, tales of adventure, heroism, and romance set in magical worlds where strong women and honorable men work together to save their world and each other.

4.8 out of 5 stars
4.8 out of 5
16 global ratings
How are ratings calculated?
To calculate the overall star rating and percentage breakdown by star, we don’t use a simple average. Instead, our system considers things like how recent a review is and if the reviewer bought the item on Amazon. It also analyses reviews to verify trustworthiness.

Pauline M Ross
5.0 out of 5 stars Another terrific read!
Reviewed in the United Kingdom on 10 December 2015
Verified Purchase
This is the fifth, and penultimate, part of the Daughter of the Wildings series of western fantasies, and this is the moment I've been looking forward to from the start. Finally, we get to leave the Wildings behind temporarily and visit Granadaia, the home of rogue mage Silas, and the place where mages are the wealthy aristocrats, and those without magic (Plains) are not much more than slaves.

At the end of the fourth book, To The Gap, Silas had been shot and captured by mage hunters, to be taken back to Granadaia. It's all down to his wife Lainie, Wildings-born and a mage with both Granadaian and Wildings abilities, to ride to the rescue. Although I missed Silas, it was wonderful to watch Lainie rise to the occasion and work out ways to find her man and then rescue him, almost single-handed.

Granadaia is fascinatingly different from the Wildings. Some aspects felt a little bit modern, but it felt believably different from the western-style Wildings - instead of the desert, with its capricious flash-floods, Granadaia is a lush, green place, all its land given over to intensive agriculture (which is why they need the Wildings cattle), tall cities and the estates of the mages, of course. I have to say, I found it fascinating to see a society where mages are the ruling class, not just tools to be used and controlled by those in power, but actually wielding all the power themselves. And Silas’s family is very much part of that controlling power. This was very much a ‘meet the relatives’ story, and all the more fun for that reason!

The ending is suitably nail-biting, and if I didn’t find the final magely shootout totally convincing (I know Lainie’s powerful now, but even so…), it was still hugely enjoyable. This wasn’t quite the pleasantly adventurous romp of some of the previous books. Seeing Silas in captivity was gut-wrenching, and the author used the symbolism of Silas’s hat to remind the reader constantly of what was at stake. And OMG, I would never have thought the single word ‘Friend’ would reduce me to tears. Another skillfully written chapter in the series, which neatly resolves one problem while setting the scene for (hopefully) an even bigger showdown in the final book. I can’t recommend this series enough! Five stars.

Lorie
5.0 out of 5 stars I love this series more with each new book I read.
Reviewed in the United States on 5 March 2019
Verified Purchase
Lainie and Silas have become two of my favorite characters. They have such strength of character. They live their lives by the belief that all people are entitled to equal rights. Even while being persecuted by those who want things to remain unchanged and those who they are trying to help. Even so they do what's right. Add magic into the mix and you have an exciting story.
Read more
Report abuse

Constance
4.0 out of 5 stars All Lainie
Reviewed in the United States on 24 December 2020
Verified Purchase
This book is entirely Lainie. Which, I mean, I love Lainie. But I missed Silas. 😆 the ending was clever and amazing and I don't have time to say anything else because I need to go read the next one.
Read more
Report abuse
See all reviews
Report an issue
Does this item contain inappropriate content?
Report
Do you believe that this item violates a copyright?
Report
Does this item contain quality or formatting issues?
Report