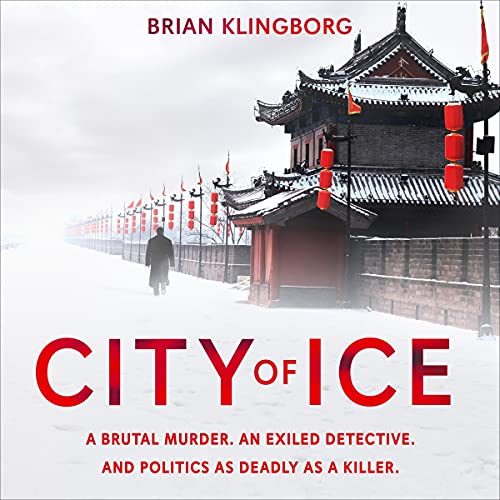 City of Ice: a gripping and atmospheric crime thriller set in modern China

Lagoon
5.0 out of 5 stars A sumptuous takeaway.
Reviewed in the United Kingdom on 17 May 2021
Verified Purchase
Police inspector Lu Fei is busy; getting drunk. But when called to duty to investigate the grisly murder of a young woman, Lu devotes himself to the cause. Lu is quite the philosopher and regales the reader with snippets of wisdom or prose throughout the book. It may just be his way of keeping sane, either way, they were most welcome as were the extracts of the teachings of Chairman Mao Zedong that head up each chapter.

The story is set in Harbin. Often, when we think of China, cities such as Shanghai and Beijing come to mind. Harbin is a fascinating city; with a heavy Russian influence and temperatures that are well beyond anything we will experience in the western world.

To the case itself. Upon further examination, as if being murdered weren’t indignity enough, the young lady has hard her heart, liver and lungs removed. Lu keeps an open mind as to what the motive is and works with what he has; which isn’t much. In terms of the investigation, the path Lu follows is a well trodden one. Running down the clues, seeking witnesses. The essential difference in China though is that once a suspect is charged, their subsequent determination of guilt and sentencing are pretty much a formality. Lu is not yet jaded enough to present the first potential malefactor he comes across to carry the can though.

The shining light here is the drip feed of observations and hard facts about China and its culture.It is so absorbing.Never detracting from the narrative, the author educates us as we follow Lu and with each chapter read, you are a little richer in your knowledge of a country that has always held its cards close. And Lu himself is a wonderful creation. A crafty fighter, a diplomat and an old romantic. Sometimes the diplomacy takes a header in favour of a judicious beating, but needs must and all that.

An absolute feast of knowledge and a story that is China through and through. Oh that crime fiction were all as good as this.
Read more
One person found this helpful
Report abuse
See all reviews
Back to top
Get to Know Us
Make Money with Us
Let Us Help You
And don't forget:
© 1996-2021, Amazon.com, Inc. or its affiliates