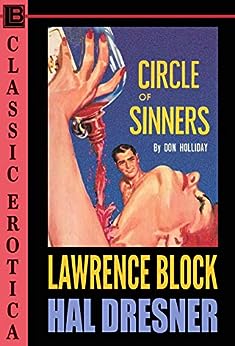 by Lawrence Block (Author), Hal Dresner (Author) Format: Kindle Edition
See all formats and editions
Sorry, there was a problem loading this page. Try again.
Because they were collected into a single hardcover volume published by Subterranean Press, a good number of readers are acquainted with my three collaborations with Donald E. Westlake. That's not the case with CIRCLE OF SINNERS, a similar joint effort undertaken with another longstanding (and, I'm pleased to say, still standing) friend and colleague, Hal Dresner. Unlike two of the Block/Westlake titles, CIRCLE OF SINNERS did not bear a joint byline; Nightstand issued it as "by Don Holliday," which was in fact Hal's pen name. (To increase the level of confusion, one book of mine was originally published under that pen name, though I'm not entirely certain why; it's since been reissued by Hard Case Crime under my name and retitled BORDERLINE, and just the other day my Hollywood agent reported a movie guy inquiring about rights. Trust me, nothing will come of it.)

But I digress. It's a pleasure to be able to bring back CIRCLE OF SINNERS, which was both easy and enjoyable to write—and, I can but hope, to read. The model here was REIGEN, a very successful play of Arthur Schnitzler's, better known as LA RONDE, the title of the French-language film by Max Ophüls. The structure—a chain of affairs, which each character in turn hooking up with someone else, served as the model for at least three additional films, beginning with Roger Vadim's CIRCLE OF LOVE in 1964.

Well, Hal and I got there ahead of Vadim, though surely with less impact. I might add that one short novel of Schnitzler's, CASANOVA'S HOMECOMING, was on the shelves of my parents' library, and I had the great good fortune to read it at an impressionable age. (Come to think of it, I don't believe I ever had an age that wasn't impressionable. Never mind.) Schnitzler may have been more of an influence on my development as a writer than I've realized, and I suspect it would be interesting and enjoyable to read some more of his work.

But for now we've got CIRCLE OF SINNERS—complete, in this instance, with the original Nightstand cover. That's something, isn't it?

This ebook edition of CIRCLE OF SINNERS contains as a bonus the first chapter of the next volume in the Collection of Classic Erotica, and the first of 3 Block/Westlake collaborations, A GIRL CALLED HONEY.
Read more
Previous page
Next page

Lawrence Block has been writing award-winning mystery and suspense fiction for half a century. His newest book, pitched by his Hollywood agent as "James M. Cain on Viagra," is The Girl with the Deep Blue Eyes. His other recent novels include The Burglar Who Counted The Spoons, featuring Bernie Rhodenbarr; Hit Me, featuring philatelist and assassin Keller; and A Drop Of The Hard Stuff, featuring Matthew Scudder, brilliantly embodied by Liam Neeson in the new film, A Walk Among The Tombstones. Several of his other books have also been filmed, although not terribly well. He's well known for his books for writers, including the classic Telling Lies For Fun & Profit and Write For Your Life, and has recently published a collection of his writings about the mystery genre and its practitioners, The Crime Of Our Lives. In addition to prose works, he has written episodic television (Tilt!) and the Wong Kar-wai film, My Blueberry Nights. He is a modest and humble fellow, although you would never guess as much from this biographical note. --This text refers to the paperback edition.

Craig
3.0 out of 5 stars It's not the sex that stands out in this book: It is the violence.
Reviewed in the United States on 17 January 2021
Verified Purchase
The structure of this novel is patterned after Arthur Schnitzler's classic play La Ronde. In the first chapter, Miles Carter has a one-night stand with Allie. In the second chapter, Allie is plied with liquor and then seduced by Bobbie (or assaulted, it depends on your point of view, and probably whether you read this in 1961 or 2021).

Bobbie is raped by Tony… Tony tries to make it with Laura… Laura boffs Joel, a beatnik in Greenwich Village… and so it goes until the final chapter, when Miles returns to sleep with Judy to finally close the whole sweaty, messy circle.

Schnitzler's version was a satire of Vienna's false morality in the Victorian era, as well as a social commentary on how sex crosses over social, class, and economic boundaries. Schnitzler balanced cheekiness and world-weariness in his characters and their dialogue. This version is… well, not that. This a simply young Lawrence Block and Hal Dresdan learning their craft and at the same time earning a few bucks writing sleaze.

It's not the sex that stands out in this book. It is the violence. The pimp who slices his girls with razors… The teenage flirt who calmly hands over another woman--a lesbian--to be gang raped… The casual racial slurs and offhand violence against homosexuals…

Even poor Miles Carter gets his brains blown out as he tries to enjoy his second dalliance, leading to a great closing line: "It is unfortunate about Miles Carter. But I also think it is just as well. Although I have never met the person previously, I have the feeling that he is the kind who could start a lot of trouble." Boy, did he ever.

Lawrence Block could have almost gotten away releasing this as part of his "LB Classic Crime Library" series. It seems clear he was working out his rogue gallery of rascals, killers, psychopaths and ill-fortuned ne'er-do-wells that would one day rub shoulders with Matt Scudder on the streets of New York City.

hank the crank
5.0 out of 5 stars Another sexy gem!
Reviewed in the United States on 10 August 2016
Verified Purchase
Won't go into too much detail since I've already reviewed some of these classic erotica novels. Essentially these were stories that LB cranked out in order to make a living as an author at a time when the pulps were just a memory and "the great American novel" was being written by a multitude of hopefuls. Block may have written these stories as sort of throwaways but they have an awful lot going for them.
If you enjoy period pieces and a good story well told, you will surely enjoy this book and the others in the series. I find I'm addicted to them and will try to read them slowly so they don't run out too soon!
Read more
Report abuse
See all reviews
Back to top
Get to Know Us
Make Money with Us
Let Us Help You
And don't forget:
© 1996-2022, Amazon.com, Inc. or its affiliates