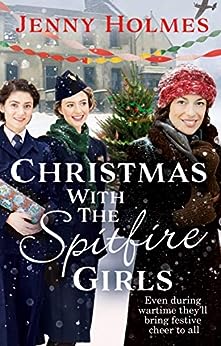 Gritty and uplifting, it's a tale of triumph over adversity ― Choice on The Mill Girls of Albion Lane --This text refers to the paperback edition.

Jenny Holmes lives in a beautiful part of Yorkshire and sets her sagas in the industrial heartland nearby. She enjoys horse riding, gardening and walking her dog in the dales. She also writes children's books as Jenny Oldfield. --This text refers to the paperback edition.

The exciting new Christmas novel from Jenny Holmes, for readers of Elaine Everest and Nancy Revell. --This text refers to the paperback edition.
Read more

4.6 out of 5 stars
4.6 out of 5
783 global ratings
How are ratings calculated?
To calculate the overall star rating and percentage breakdown by star, we don’t use a simple average. Instead, our system considers things like how recent a review is and if the reviewer bought the item on Amazon. It also analyses reviews to verify trustworthiness.

LOTE Teacher
4.0 out of 5 stars More than just Christmas!
Reviewed in Australia on 15 November 2020
Verified Purchase
Actually Christmas was almost just an afterthought in this book it was more about the relationships of the various ATA girls. Saying that it was a good read with few unexpected twists to the plot and was quite enjoyable.
Read more
Helpful
Report abuse
See all reviews

northernreader
5.0 out of 5 stars Despite the dangers, the Air Transport Auxiliary prepare for Christmas
Reviewed in the United Kingdom on 16 December 2020
Verified Purchase
This is another well written novel featuring the women of the Air Transport Auxiliary on an airfield in Yorkshire during the Second World War. This third novel in the series is set in November 1944, as hopes are high for the end of the war and several of the characters are looking forward to Christmas. Although this is a book in the series, I feel confident that it could be enjoyed as a standalone novel, as the characters are introduced and some of the backstory is included as necessary. In this novel three of the young women are featured: Bobbie, Viv and Mary. A new pilot is introduced, the highly experienced and well known First Officer Peggy Ibbotson, who arrives to fly planes even though she has been training pilots. This book, like the earlier novels in the series, is excellent on the risks that the women face, as transporting the planes involves flying without radios, in planes that often need repair, at the mercy of weather and changing local conditions. It is also known that sometimes enemy planes attack the transport pilots, which makes them extremely vulnerable. This is a very tense novel with twists and turns both on the ground and in the air. I found it an immensely fascinating novel, full of human interest in terms of the perceived dangers and hints of romance and intrigue.

Bobbie has moved on from the traumas of the past, and is now a senior officer. While she enjoys flying, like the other girls she has an special affection for the well designed Spitfire. She is keen to help organise a Christmas event, a dance, despite the tricky moments she endures at the dance that occurs at the start of the book. She admits to being very fond of Ray, who runs a local racehorse stables. Not that the course of their relationship will run smoothly; decisions will have to be made. Mary is deeply in love with Cameron, and commitment may well be demanded. However, she has other concerns, as she worries about her younger brother who is fighting abroad. Viv, the lively, brave and talented Canadian pilot, is not so committed to a man, but is completely determined to ensure that the Christmas celebrations proceed as planned. Meanwhile, the pilots are flying planes against a background of their own fears, especially as some of their loved ones are flying actual combat missions. As relationships can be made more tense by fear, there are also pressures from family and friends.

This is a book which demands to be read once started, as each of the characters is drawn in a consistent manner as the overall story develops. The research into what it feels like to fly a variety of planes in several different conditions is understated but effective. The emotional pressures on the women and those whom they love is well described, especially in the community of the airfield with the various ground crew and other ranks who are all dedicated to getting the maximum number of planes in the air to help the war effort. This is a powerful book on the bravery of the women and men connected with the airfield, the technical requirements of flying and the desperate hope that the war will soon be over before more losses must be faced. I recommend this book to anyone who enjoys the vivid depiction of wartime conditions, the lives of women in wartime, and the special circumstances of the final months of the war.
Read more
3 people found this helpful
Report abuse

Gwendoline Brammall
5.0 out of 5 stars Christmas with the Spitfire Girls
Reviewed in the United Kingdom on 29 October 2020
Verified Purchase
Wow they really all Ended on a Note didn't they .
At the Christmas Party .Glad Cameron got back to
Mary . And Giles and Vivienne got together too.
She didn't know if he would or not come to the
Christmas party after she spoke to him the way
She did. But surprised her. And Glad that Bobbie and
Ray were going to make a go of their relationship.
By her inviting him to Scotland to meet her Parents.
It was scary for them when Ridley got Bombed and
Poor Hilary got Injured but would make it. And Rickey
AT A would pick up where they left off.
Yes enjoyed this book very much good ending glad they
All got together and that Peggy got on well with everyone
Too. She certainly helped around the base. .
Yes a real good story and was very thrilling in parts
For Mary and her Brother Tom she found. Was here
And not In Germany. A shock for her. Lots of intrigue
And excitement .Great book good Ending. Very enjoyable.
I give this five stars as it warrants it from me.
Thank you Jenny Holmes enjoyed reading about the Spitfire
Girls great saga. ..will miss them now. ..the series has ended.
Read more
Report abuse

Jane
5.0 out of 5 stars Addictive
Reviewed in the United Kingdom on 12 January 2021
Verified Purchase
After first reading The Spitfire girls I was totally hooked I be traveled with the girls as the enter what was technically a mans world So they need to excel They certainly do but not without trials and heartbreak This whole series is a must read It shows how we women step up in times of adversity and discrimination Fabulous reads cant wait for the next hopefully there will be
Read more
Report abuse

Amazon Customer
5.0 out of 5 stars Christmas with the Spitfire Girls
Reviewed in the United Kingdom on 17 February 2021
Verified Purchase
Just finished this excellent series flying with the strong, confident women of theATA. Working and living together as comrades and friends they played there part in WWII without getting proper recognition for their contributions. These stories still need to be told.
Read more
Report abuse

Marilyn Williams
5.0 out of 5 stars Another great read
Reviewed in the United Kingdom on 16 January 2021
Verified Purchase
I thoroughly enjoyed this book , it was warm and interesting but I have to say I wish that the publishers would say in what order the books are in. I read the first one then this one thinking it was the second one, now I'm about to read the second t one
Read more
Report abuse
See all reviews
Back to top
Get to Know Us
Make Money with Us
Let Us Help You
And don't forget:
© 1996-2021, Amazon.com, Inc. or its affiliates