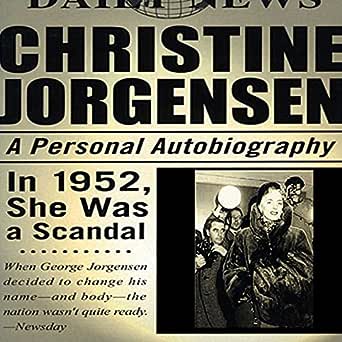 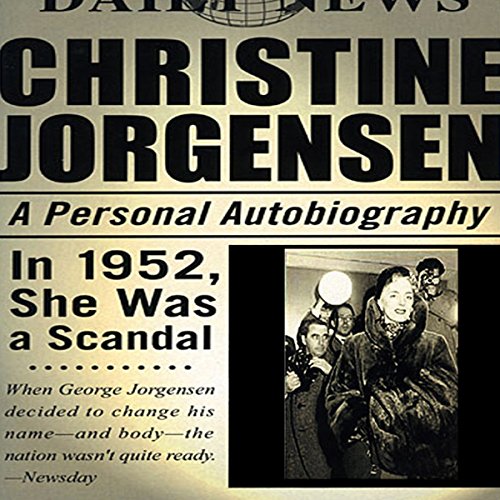 theatremaker
4.0 out of 5 stars Four Stars
Reviewed in the United Kingdom on 11 January 2016
Verified Purchase
an important story...of its time but remains a significant milestone.
Read more
Helpful
Sending feedback...
Thank you for your feedback.
Sorry, we failed to record your vote. Please try again
Report abuse

Alissa
2.0 out of 5 stars Looking for something deeper
Reviewed in the United States on 31 January 2016
Verified Purchase
I can't remember where I heard about this book,but it sounded pretty interesting. It started off okay and you can forgive the fact that it's not written by a practiced writer, but it was a bit boring. I didn't find any depth in this autobiography, any struggles experienced were really glossed over, no fears , family and friends were all instantly accepting, no worries surrounding the surgery or anything else. It might have been about getting a tonsilectomy. Most of the issues were about getting an acting career off the ground and too much name dropping in my opinion . It was kind of a waste of reading time and too superficial. I had hoped for more depth.
Read more
4 people found this helpful
Helpful
Sending feedback...
Thank you for your feedback.
Sorry, we failed to record your vote. Please try again
Report abuse

lawyeraau
4.0 out of 5 stars THE WORLD'S FIRST FAMOUS TRANSSEXUAL...
Reviewed in the United States on 12 August 2001
Verified Purchase
This is a must read book for those interested in gender identity issues, as well as for those who enjoy memoirs. Ms. Jorgensen was the first American to have a sex change operation and undergo such public scrutiny. Though she never intended to have her transformation become public knowledge, it was leaked to the press, and from then on, her life was never the same. In the cultural milieu of the nineteen fifties, Ms. Jorgensen's sex change was big news.

Starting her life out as George Jorgensen, she never quite felt that she fit in and became a loner by inclination. One striking issue in the book, however, is that she came from an extremely loving and supportive family who always unconditionally accepted her as she was, both before and after her metamorphosis. Not every transgendered individual is as lucky as Ms. Jorgensen appears to have been with respect to familial relationships. Perhaps it was because her parents were of Danish descent, and Scandinavian people tend to be more accepting of these issues.

Relentlessly upbeat, the book is a flattering and politely idealized memoir, as if anything too dark were exorcised from its pages. The chapters which cover Ms. Jorgensen's time in Denmark, where her change took place, are somewhat superficial and non-clinical. There is no real indication of any personal struggle or self-doubt with respect to her decision to undergo a life changing transformation. One has to remember, however, that this book was originally published approximately thirty five years ago, when the public's sensibilities on such issues were far more delicate.

What does come across in this autobiography is that Ms. Jorgensen had the courage to make a decision that for the time was somewhat unique and cutting edge, as there was virtually no literature available for the general public on transsexualism, and gender identity studies were still in their nascent stage. Ms. Jorgensen essentially paved the way for others by bringing to the public consciousness issues that had not before been the subject of public discussion. In bringing these issues into the public domain, she was subject to a torrent of abuse, as well as discriminatory practices, and seemed to be the endless butt of jokes. She took these problems in stride, however, and always managed to have the last laugh. Laughter, indeed, appears to have been the best medicine.

Ms. Jorgensen, an attractive natural blonde, who personified the stereotypic feminine ideal of the time, became an entertainer. Given her notoriety, her career options were limited, as she gathered a crowd whenever her identity became known. Playing the hand that was dealt her, she parlayed her notoriety into a successful club act, digressing into acting. She managed to make a success of herself, living a life that was interesting, but hardly scandalous. While this is an intriguing memoir, it is not an in depth profile of Ms. Jorgensen. The reader comes away knowing about Ms. Jorgensen, rather than knowing her. Still, all in all, it is a worthwhile read.

Tabby2
3.0 out of 5 stars Nothing weird here.
Reviewed in the United States on 26 September 2015
Verified Purchase
The story is very touching and interesting. You can't help liking Christine. The reason for only 3 stars is it can be a bit boring at times. Drags on with things not relevant to story. I hoped there would be more medical details about the operations she went through.
She was a brave person and a kind, gentle woman.
Read more
One person found this helpful
Helpful
Sending feedback...
Thank you for your feedback.
Sorry, we failed to record your vote. Please try again
Report abuse

Janet L. Caputo
4.0 out of 5 stars Enjoyed it very much
Reviewed in the United States on 9 January 2018
Verified Purchase
Book was very interesting. Enjoyed it very much.
Read more
Helpful
Sending feedback...
Thank you for your feedback.
Sorry, we failed to record your vote. Please try again
Report abuse
Load more international reviews

M. Bartholomew
5.0 out of 5 stars Five Stars
Reviewed in the United States on 10 August 2015
Verified Purchase
I love autobiographies and this one delivers! What an amazing Lady!!! I wish I had known her!!
Read more
Helpful
Sending feedback...
Thank you for your feedback.
Sorry, we failed to record your vote. Please try again
Report abuse

Kayla Lynn
4.0 out of 5 stars Christine Jorgensen
Reviewed in the United States on 25 January 2015
Verified Purchase
This is the first book dealing with transgender issues that I ever read back in the 1970s ... wonderful account. Though, having seen clips of Christine over the years, I think she paints a picture of herself that might be just an ever bit too angelic.
Read more
Helpful
Sending feedback...
Thank you for your feedback.
Sorry, we failed to record your vote. Please try again
Report abuse

John Benitez
5.0 out of 5 stars CHRISTINE JORGENSEN
Reviewed in the United States on 26 August 2008
Verified Purchase
EXCELLENT BIOGRAPHY, EASY READING, THOUGH INFORMATIVE AND FUNNY AT TIMES. I HIGHLY RECCOMEND THIS BOOK ESPECIALLY FOR THOSE OF US WHO ARE INTERESTED IN PEOPLE. THIS CASE ILLUSTRATES THE IDEA THAT EVEN THOUGHT FACED WITH ADVERSE CIRCUMSTANCES ONE CAN OVERCOME ALL ODDS IF ONE IS HONOST WITH ONE'S SELF AND DETERMINED. THIS STORY IS AMAZING.
Read more
Helpful
Sending feedback...
Thank you for your feedback.
Sorry, we failed to record your vote. Please try again
Report abuse

Kindle Customer
5.0 out of 5 stars The real story as told by the person who did it!
Reviewed in the United States on 4 January 2014
Verified Purchase
I wish I had read this book 40 years ago!

This book is Christine's autobiography of her transition from George Jorgensen to Christine. She shares her experiences of life from a very young age as well as feelings and how others perceived her prior to her decision to get a sex change. Often credited as the first person to undergo a sex change, Christine herself writes of how she had tried to go to Sweden, where previous operations had been done, and stopping in Denmark, where she had relatives and happened to find a supportive doctor who could perform the procedure for her there.

Over the course of the book, I found myself laughing at times, crying a times, and often crying tears of sorrow for not having read this book 40 years ago when I was struggling with my on transsexual nature, trying to accept a body I hated. There were so many things about her story that I had been told, by health care professionals, that were wrong. I had been tricked into making a misinformed decision.

What distinguishes Christine Joorgensen is not that she was the first, but she was the first to have her story made public, and in a really big way. It was an accident, information leaked to a relative then to a friend who leaked it to the press. Christine had been hoping for a relatively private life, but when thrust into the spotlight an exclusive deal with a publisher to tell her story gave her time to adjust to the limelight and eventually gave her the chance to laugh at the jokes made about her, and even tell them herself. She even started putting on shows and played Vegas.

Reading up on information published after the book was published, it seems that she lived a long and happy life, being almost married once (the State decided the marriage wasn't legal because she was born a man), and married for real. She discusses some of the legal and social barriers she encountered as well.

This is very different from the movie, which was written from the perspective a close friend who became her almost first husband, and is a tear jerker in it's own right. I strongly recommend this to anyone who has any desire to understand the transgender experience.
Read more
One person found this helpful
Helpful
Sending feedback...
Thank you for your feedback.
Sorry, we failed to record your vote. Please try again
Report abuse
Load more international reviews

Kindle Customer
5.0 out of 5 stars An essential read
Reviewed in the United States on 19 February 2013
Verified Purchase
While Jorgensen, like any other autobiographer, has an inherent bias towards showing herself in a good light, it does not effect the poignancy of the book. It's a touching yet somewhat straightforward account of an amazing transwoman who helped pave the way for many others who followed her brave example.
Read more
Helpful
Sending feedback...
Thank you for your feedback.
Sorry, we failed to record your vote. Please try again
Report abuse

Lazyee
5.0 out of 5 stars If ANY member of your family is transgender or a member of this community, I urge you to read this book.
Reviewed in the United States on 19 October 2010
Verified Purchase
After reading this book, I understood my transgender son and am his main support system. Parents, read this and help your kids; they need you more now than ever. This books allows you to feel, really feel, the agony our kids and loved ones live with daily. Please read this.
Read more
4 people found this helpful
Helpful
Sending feedback...
Thank you for your feedback.
Sorry, we failed to record your vote. Please try again
Report abuse

Michael Littrell
5.0 out of 5 stars Loved it!
Reviewed in the United States on 5 August 2013
Verified Purchase
Very interesting, up close and personal detail of a long long struggle. Very brave women that always kept moving forward towards her goal.
Read more
Helpful
Sending feedback...
Thank you for your feedback.
Sorry, we failed to record your vote. Please try again
Report abuse