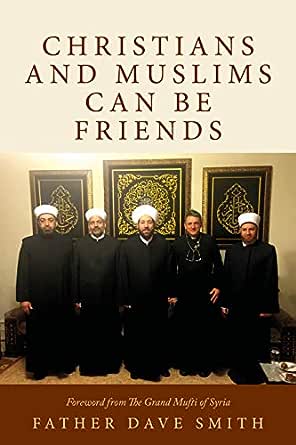 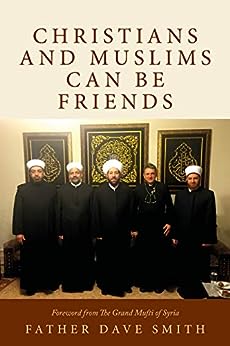 Christians and Muslims can be Friends Kindle Edition

'I offer [Father Dave] my heartfelt thanks for his efforts and endeavours in the footsteps of the prophets and saints.' Dr Ahmad Badreddin Hassoun, the Grand Mufti of Syria

'There has never been a more important time to nurture dialogue between the different religious groups that make up our country. Thank you, Dave, for your book. I believe it will do much to generate understanding and mutual respect, and to build friendships.' Anthony Albanese, Federal Labor Leader

'Thank you, Father Dave, for this insightful and incredibly important contribution to Australian society. I encourage everyone to read this book - it will leave you hopeful, inspired and, hopefully, a little wiser. It certainly did for me, and I am ever so grateful to Father Dave for having the courage and foresight to write it.' Anne Aly, MP

Father Dave Smith is an Anglican parish priest best known for his work with at-risk young people, for which he has received numerous community awards, including three nominations for Australian of the Year. He has also received significant media attention for his accomplishments in his chosen sport of boxing and is Australia's oldest active professional fighter. Less public, but no less passionate, has been his commitment over many years to help bridge the communication gap between the Christian and Muslim faith communities. Father Dave is the proud father of four children - Veronica, Imogen, Soren and Francesca. --This text refers to the paperback edition.

James A McBride
5.0 out of 5 stars Christians and Muslims, when true to their creeds, can be friends
Reviewed in Australia on 28 November 2020
Verified Purchase
May I simply state, in Father Dave's own words, what I understand this book to be about.

"I’m hoping that this book will have a transforming effect on many lives, and on church people in particular ... We are on a road that has not been well-travelled of late. Our destination though is glorious." "I’m not suggesting that world peace will suddenly fall into our laps once we learn to get along, but neither do I underestimate the positive impact that the church could have on the domestic and global situation if we stood up and showed ourselves to be true to our creed."

"I’m not suggesting for a moment that there is no connection between what is written in the scripture and how it is interpreted. I’m not even suggesting that the Qur’an isn’t a more fertile source of martial inspiration than the New Testament. Even so, the variety of denominations and sects within both Christianity and Islam are testimony to the fact that both the Bible and the Qur’an can be interpreted in a variety of ways, and indeed, there are preachers of violence and non-violence within both religions."

"‘Happy is the one who seizes your infants and dashes them against the rocks’ says the Psalmist (Psalm 137) in one of any number of Old Testament verses that could be used to incite a holy war. And those who think that such jihadist catch-cries are limited to the Jewish Bible forget how the words of Christ used in the parable of the great feast – ‘force them to come in’ (Luke 14:23) – were used by the Crusaders to justify forcing Christian conversion on Muslim peoples they conquered."

"Of course, I don’t believe the words of Christ in the parable were meant to encourage forced conversion any more than I believe Psalm 137 justifies violence against children. If you want to know how I and the vast majority of Christians interpret these passages, you only need to ask us. Likewise, if we want to know how Muslims deal with passages in the Qur’an that sound inflammatory to us then we need to ask them how they interpret these passages, and surely, we should ask them before jumping to conclusions.
Read more
One person found this helpful
Helpful
Report abuse
See all reviews

Laura
5.0 out of 5 stars Good
Reviewed in Spain on 29 November 2020
Verified Purchase
I bought this book after my trip to Syria and i like it.
Read more
Report abuse

Samuel
5.0 out of 5 stars This is a book written by a Christian for Christians
Reviewed in the United States on 25 January 2021
Verified Purchase
This is an excellent book that shows that the barriers between Muslims and Christians are really a fallacy. Sure there are doctrinal differences and Father Dave talks about that. But more importantly he talks about what Jesus teaches us. This is the first part of the book. The second part of the book is in dialogue form primarily between Father Dave and his Muslim Friends. I highly recommend this book for Christians who want to no more about their faith, and why we actually can be friends with Muslims.

Note: The extremists(terrorists) that claim they are doing things which are bad in the name of Allah (Arabic word for God), are not following the true message of the Quran. They aren't even considered true Muslims by those that actually live its message.
Read more
Report abuse
See all reviews
Get FREE delivery with Amazon Prime
Prime members enjoy FREE Delivery and exclusive access to movies, TV shows, music, Kindle e-books, Twitch Prime, and more.
> Get Started
Back to top
Get to Know Us
Make Money with Us
Let Us Help You
And don't forget:
© 1996-2021, Amazon.com, Inc. or its affiliates