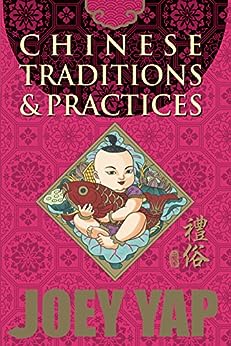 by Joey Yap (Author) Format: Kindle Edition
See all formats and editions
Sorry, there was a problem loading this page. Try again.
China has a long, rich history spanning centuries. As Chinese culture has evolved over the centuries, so have the country's many customs and traditions. Today, there's a Chinese custom for just about every important event in a person's life – from cradle to the grave.

In recent times, there has been a resurgence in interest and adoption of traditional customs. More and more people want to know how they can combine the old with the new.

Some Chinese customs and rites were created for purely practical reasons. Others are rooted in early religious beliefs and superstitious thinking. Many deftly incorporate elements of Chinese metaphysics.

Although many China's customs have survived to the present day, some have been all but forgotten: rendered obsolete by modern day technology. This book explores the history of Chinese traditions and cultural practices, their purpose, and the differences between the traditions of the past and their modern incarnations.

If you are a westerner or less informed about Chinese culture, you may find this book particularly useful, especially when it comes to doing business with the Chinese – whether it be in China itself or some other country with a considerable Chinese population. If anything, it will allow you to have a better casual understanding of the culture and traditions of your Chinese friends or acquaintances. An understanding of Chinese traditions leads to a more informed, richer appreciation of Chinese culture and China itself.
Read more
Previous page
Next page
Due to its large file size, this book may take longer to download

Dato Joey Yap is the celebrated and global bestselling author with more than 170 books published and counting. His literary work has been translated and published in every continent of the world, making it to the local best sellers list on numerous occasions and has sold more than 4,200,000 copies. Some of the bestsellers published have also earned The Merit Award from The Asean Book Publisher Association.

He is a passionate and internationally renowned speaker who is highly sought after in business communities and corporate events. His talks have an appeal that transcends barriers of age, culture and occupation.

He also now has a popular annual Chinese New Year Astrology program aired both on TV and Radio networks. In addition to being a regular guest on various radio and TV shows, Joey is also a regular columnist in the local press such as The Star, The Edge and The News Straits Times and contributor to leading media giants from around the world.

In 2008, he was listed by The Malaysian Tatler as the Top 300 Most Influential People in Malaysia and Prestige s Top 40 Under 40. In recognition of his contribution to the industry, society and country, Joey was conferred the Darjah Indera Mahkota Pahang (DIMP), a prestigious award which carries the official title of Dato in 2013. In 2014, he was named as one of The Inspiring Top 10 Young Malaysian Millionaires by RHA Media, a publication on the high achievers and affluent societies in Malaysia.

The Mastery Academy of Chinese Metaphysics or also known as Joey Yap Research International was founded by Dato Joey Yap in 2001. Today, it has become the world s premier educational institution for Chinese Metaphysical Studies and offers a wide range and variety of courses, seminars, and other offline and online structured learning programmes in the field of Chinese Metaphysics. The disciplines and subjects include Feng Shui, Chinese Astrology, Face Reading, Date Selection, Qi Men Dun Jia, Yi Jing, as well as other advanced studies in Classical Feng Shui like Xuan Kong Da Gua, amongst others. The academy espouses an educational philosophy that draws from the best of the East and West and has benefitted more than thousands of students who come from all over the world.

With 2.1 million followers and students from over 37 countries, the academy under the stewardship of Dato Joey Yap is steadfast in empowering students from all walks of life to maximise their personal results for their goals, be it in terms of wealth, health, relationships and general well-being. --This text refers to the paperback edition.