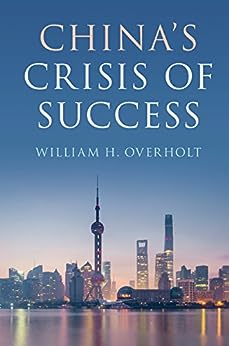 China's Crisis of Success re-examines China's rise to superpower status, showing that, despite social and administrative strengths often unacknowledged by Western commentary, continued success now requires re-invention of its economy and politics. Xi Jinping's extremely risky strategy for re-invention could lead to success, stagnation or a great crisis. --This text refers to the hardcover edition.

'This book is an excellent read. It debunks many common misunderstandings about China and explains why a political system of electoral democracy tends to be inimical to economic development in poor countries with much social inequality.' Pieter Bottelier, The Johns Hopkins University

'William H. Overholt has been watching Asia for half a century, mostly making observations that run against the tide. His 1993 The Rise of China was heavily criticized at the time, but proved correct. Now, Overholt sees a real need for a change in the model that has brought China so much success economically; it must become more consumption oriented, less reliant on investment, it must move from manufacturing to services, and it must upgrade its manufacturing. These are all complex challenges that carry substantial risks. Overholt lays out these challenges with his usual clear sightedness.' Joseph Fewsmith, Boston University

'William Overholt, who may have been the first to identify the 'rise of China' in his 1993 book of that name, goes straight to the heart of the puzzles presented by contemporary China. … This is an eye-opening book that debunks many established notions held by disciplinary academics, as well as by policymakers both in China and the West.' Gilles Andréani, Survival: Global Politics and Strategy --This text refers to an out of print or unavailable edition of this title.

William H. Overholt is Senior Research Fellow at Harvard University. He is author of a number of books including, most notably, Asia, America and the Transformation of Geopolitics (Cambridge, 2008) and The Rise of China (1993). --This text refers to an out of print or unavailable edition of this title.
Read more

David Hardcastle
3.0 out of 5 stars Fascinating but very unbalanced
Reviewed in the United Kingdom on 19 June 2021
Verified Purchase
After reading other reviews I had expected much more from this book and was left feeling a bit flat. It is clear that the author is very knowledgeable and well-travelled in the region and what he says is often fascinating, thoughtful and insightful. But this book is far from balanced and it’s perhaps what he chooses not to say that is more illuminating. How is it possible to write a serious work on China and manage to not discuss any controversial subject? And it is this unbalanced nature of the book that fundamentally undermines it. For instance, in the chapter about what happens next, the recent events in Hong Kong were not discussed, despite being written only a short while before they actually happened. So did the author not foresee them? Or did he foresee them but chose not to discuss them? Either which way, such a glaring miss does somewhat undermine the actual predictions. This book is certainly worth reading, but just be aware that you will get a fabulous insight in to one half the story.
Read more
Report abuse

Flying Man
4.0 out of 5 stars Unique perspective on China
Reviewed in the United States on 5 March 2018
Verified Purchase
The author has spent most of his career connected with China in one way or another and this is a set of thoughts/ideas on why China has been successful and where it might be headed. The analysis of why China has been successful (following the East Asian statist export-oriented model) is spot on and I like the fact that he does a convincing job attacking the idea that democratic institutions would have performed better (I very much doubt this). But his analysis of the future is flawed on a number of dimensions - (a) he does not think about geography enough in comparing Taiwan, South Korea and Japan with China and geography is critical in thinking about all sorts of issues for China, (b) he seems obsessed with trying to show China is better than India and that is almost beside the point and not relevant, (c) he overstates the value of Chinese infrastructure investment and underplays the macroeconomic adjustments required (the Michael Pettis arguments are not really apparent in his 10 or so key contradictions), (d) he overvalues the current Chinese strategy (calling it “brilliant”) yet admitting in the end that nothing really is clear, (e) he says much is uncertain about the future yet does not spend a lot of time discussing the various scenarios for the future he introduces.

wsmrer
5.0 out of 5 stars This is a brilliant work on a topic difficult to order
Reviewed in the United States on 13 April 2018
Verified Purchase
Overholt is giving us ‘Comparative Analysis,’ formed from his up close contact over many years with ‘The Asia Model’ as he calls it (Japan, Korea, Taiwan and Singapore) and what it can yield about a very different Model – China at a critical stage.
“China is on the cusp of greatness, stagnation or tragedy, and the risks are so high that small, unexpected events could make the difference. That is the defining quality of China’s crisis of success.”*

This is a period he has seen unfold before in four nations as the Asian’s Tigers were developing from crude authoritarian roots (Japan post war) to impressive ‘democratic beings;’ and now he is using that back drop to appraise China’s possible direction under Xi Jinping’s dominate leadership as it moves from an export driven world factory to technological assembler and designer of high end products with its own rapidly rising middle class – a different world but much the same Leninist one party political system – how stable is that?

There is evidence of the development of democratic governments evolving out of the authoritarian Asian model when a certain level of middle class income is reached (So. Korea, Taiwan and Singapore). China has achieved that level of development but is moving under Xi Jinping toward a more restrictive authoritarian system in many ways; Overholt’s understanding of these issues and their causes is unsurpassed. Unlike many authorities he has spent on sight time observing the noted events and interacted with their agents; don’t miss his footnotes!
His Comparative Analysis on the topic of Corruption in all the countries he knows is worth the price of admission.

This is a book you will enjoy regardless of your former understanding of China.**

5 stars
* Published 2018 before Xi Jinping winning demise of Presidential term limitation in 3/18.
**There is a recent publication that also sees China entering a critical stage: Carl Minzner, End of an Era: How China’s Authoritarian Revival is Undermining Its Rise. Both are excellent.
Read more
10 people found this helpful
Report abuse

Christopher W. Beal
5.0 out of 5 stars The US has only 5% of the world's people - Asia has 60%, and Dr. Overholt helps us see them clearly
Reviewed in the United States on 18 September 2018
Verified Purchase
If you have a brother – or an uncle – living for the last four decades in the most exciting countries in Asia and coming home for Thanksgiving every two or three years, you will have a special appreciation for Dr. William H. Overholt and his latest book, China’s Crisis of Success. You know that Asia has 60% of the world’s people, that many of their economies are growing – and that China is the most important of them all.

The US has only 5% of the people, and our children and grandchildren are going to rise or fall depending on their ability to connect with Asia’s 60%.

You may know that film-making in the US is already focused on China as the difference between making money and making big money – the same is true or becoming true in other cultural areas. Overholt emphasizes that “. . . the center of gravity of the world of fashion, art, and music will shift toward China. Currently the center of gravity of the global market is still the American baby boomer. In the future it will be millennial Chinese.” (p.98)

In many product areas, the new imperative for American companies is “globalize or be eaten.” Even in social media – “WeChat . . . has already leaped ahead . . , despite government censorship, and has been consistently more versatile than its Western counterparts (Facebook, Twitter, Gmail). It will create scale that overwhelms Western competitors who do not advance into China.” (p. 98)

Overholt describes the new power of women -- “As one travels throughout China, one constantly meets powerful women mayors and women Party Secretaries [the key decision-makers in every jurisdiction] . . . their pervasive importance is in sharp contrast both with China’s past and with many other emerging economies.” (pp. 135-6)

All the successes above - and many others Overholt describes - have brought China to a crisis — China’s Crisis of Success. Mr. Xi has pursued corruption and pollution in a way that challenges all the newly created power groups of the reform decades - “Xi Jinping’s administration has chosen to take on every major power group in Chinese society simultaneously . . .”

Overholt lists ten major areas where Xi is trapped tactically in contradictions. For example, to reverse the horrendous pollution created recently, he needs popular help across the country - and support against the newly powerful polluters. At the same time, Xi wants to keep his Communist Party ahead of the curve. He wants his popular support to be strong enough to help him, yet neither so strong nor so bold as to threaten him or get ahead of him.

Keeping track of China’s responses to these contradictions will give you an edge in understanding how Asia’s biggest economy. Remember, the U.S. is 5%, Asia is 60%.

Your grandchildren will thank you when they benefit from China’s Crisis of Success - buy it and read it right away.
Read more
3 people found this helpful
Report abuse

gundamliao
5.0 out of 5 stars best book on China
Reviewed in the United States on 3 January 2019
Verified Purchase
I dont know how u guys feel about this book, but as a Chinese, this book hits right through my heart. The author knows about China far more better than I do, it feels like he offers 'offical' and professional explanation of current government policies including something the government will never explain directly. His anticipation of future policies based on Xi's three terms seems to be the right thing the goverment is thinking about. At the first term Xi needs to consolidate power using the anti corruption campaign, at the second one he will conduct economical reform by restricting all interest groups, the third term Is necessary for further fortifying the reform result. Quite reasonable at least for me. If Xi could finish this nobody cares how many terms he will take and as an ordinary people in China the best thing we can hope is his success.
Read more
One person found this helpful
Report abuse
See all reviews
Back to top
Get to Know Us
Make Money with Us
Let Us Help You
And don't forget:
© 1996-2021, Amazon.com, Inc. or its affiliates