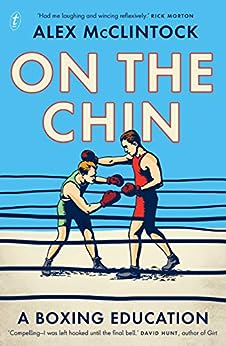 On the Chin: A Boxing Education Kindle Edition

The sporting memoir of an unlikely pugilist's attempt to take on Australia's amateur boxing circuit. --This text refers to the paperback edition.

Alex McClintock grew up in Sydney, Australia, and now lives in Toronto, Canada. His sports journalist has been published by the Guardian, SMH, the Monthly, HBO and ABC RN. On the Chin- A Boxing Education is his first book. --This text refers to the paperback edition.

stuart mcarthur
TOP 1000 REVIEWER
4.0 out of 5 stars Boxing for Dummies
Reviewed in Australia on 25 February 2020
Verified Purchase
A primer on boxing for someone (like me) who knows the bare minimum about the sport, including history, philosophy, ethics, and most importantly first hand experience. It’s the latter that keeps you reading, with the former feeling like filler material. Some of its really interesting, a lot of it not. But McClintock’s relating of his first hand experience, although sometimes maybe too deliberately self-deprecating, was honest, deep, reflective, sometimes shocking (“I found that my real joy came from hitting people”) and overall an involving journey of somebody who deliberately takes on something out of his comfort zone, and of unintuitive interest, and turns it into a passion. As we all should do.
Read more
Helpful
Report abuse
See all reviews

Tommee-Oliver
5.0 out of 5 stars If Ernest Hemingway was a boxer
Reviewed in the United States on 17 September 2019
Verified Purchase
If Ernest Hemingway was a boxer or wrote non fiction this book could have been written by him. McClintock grabs your attention from the first sentence and hangs on to it with his brilliant writing style. I never was a boxing fan until I read his book. Now I have bought all of the boxing movies from my cable company's "on demand" and intend on watching them as an enlightened viewer. What a magnificent first book! Informative, educational, interesting and entertaining. What rates higher than recommend it 100% because that is what I do for this book!
Read more
Report abuse

Matt Conrad
5.0 out of 5 stars Fun Read!
Reviewed in the United States on 24 September 2019
Verified Purchase
The writer has done a really nice job of bringing out the fun of an addiction to boxing. Loads of accessible historical anecdotes, a jaunty self-deprecating style and a nice counter-balance to some lofty cynicism of traditional boxing literature. Whether you are merely peering behind the curtain of the theater of the unexpected or are a full on #respectbox addict - try going the distance with On the Chin.
Read more
Report abuse

Roman
4.0 out of 5 stars Solid Boxing Book
Reviewed in the United States on 1 January 2020
Verified Purchase
I like this book because it toward a personal story of someone entering the boxing seen while also providing a rich history of the sport.
Read more
Report abuse
See all reviews
Back to top
Get to Know Us
Make Money with Us
Let Us Help You
And don't forget:
© 1996-2021, Amazon.com, Inc. or its affiliates