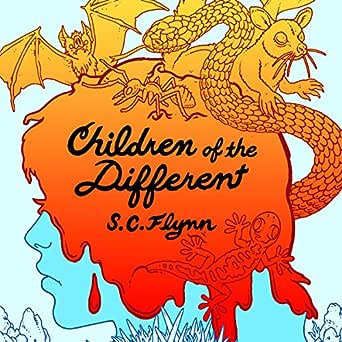 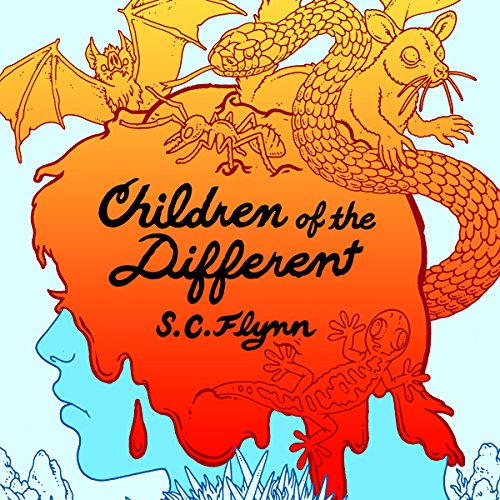 Children of the Different

Children of the Different
S. C. Flynn (Author), Stephen Briggs (Narrator), The Hive (Publisher)
Get this audiobook plus a second, free. Audible is $16.45 for 1 credit/mo after 30 days. Cancel anytime.

Kristian Thoroughgood
3.0 out of 5 stars A solid read with a great premise, and if you are interested in a different kind of YA novel you should give this one a chance.
Reviewed in Australia on 24 March 2017
Children of the Different is a solidly written dystopian YA story (are there any other kiind?) that does a fantastic job world-building a post-apocalyptic/fantasy reality, that an ending that I felt was a little abrupt and ultimately didn't quite ring true with the promise laid down by the the earlier story.

Excellent set up, but loses a few points on the dismount. Still, bronze medal at least.

Also, as I said earlier, the world building was what really grabbed me - it is truly creative/imaginative even though relying on a few established tropes.
We have the world-destroying disease and the creation of a zombie-equivalent (Ferals) - both staples of post-apocalyptic dystopian fiction. We also have a societal split, with those wanting to revert to a traditional hunter-gatherer lifestyle and city people those who want to bring back the glory of scientific achievement. These are established tropes of the genre, but tropes are fine provided the author brings something new to the party - and where the Children of the Different really shines is in the introduction of the Change and the Changeland.

Children of the survivors go through 'the change' a process which mentally thrusts each youth into the Changeland - a dramatic and dreamlike reality - and come out of this trance state with special powers - or as psycho ferals. The variety of powers available does not appear limited, although i would suggest most of them are mental in nature (so no-one in the book comes out with super-strength for example). In the main these powers are done well - Arika's powers particularly drive the first half of the book and are varied and interesting. Later on, I felt that Narrah's powers (that come much later in the book) were a bit less satisfying, and a bit more convenient from a plot perspective? I don't know, maybe I'm being too tough here.

In any case, the time spent in the Changelands are easily the highlights of the book, its dramatic and imaginative, all the more for presence the Changeland villain, the Echidna.

If anyone had suggested that an echidna (pictured) could successfully be recast into a genuinely creepy villain, I would have laughed. But Flynn's villain in the Changelands had real presence, and cast a nicely threatening atmosphere over the time spent there.

I felt the book rushed a bit towards the end, didn't make full use of the Changelands and kind of squandered the real-world villain. Nothing here was unforgivable, but I did walk away at the end vaguely unsatisfied. There was so much promise in the concept that I felt it needed more. Maybe it needs a sequel :)

I should say that I finish many YA stories a little unsatisfied, so these problems could be entirely on me.

I think that this was a solid read with a great premise, and if you are interested in a different kind of YA novel you should give this one a chance.

It's worth noting that Children of the Different is a self-published book. Whilst many self-pubbed books catch easy criticism for being incomplete or raw, I'm happy to say that the author has clearly taken the time and effort to produce a polished and finished product. The main characters - the twins Arika and Narrah - are believable and sympathetic, interesting and well rounded. The writing is professional and clear. It's on par with YA novels that are traditionally published.

fergus mccartan
4.0 out of 5 stars As a stand alone piece of work the story is well thought out.
Reviewed in Australia on 24 March 2017
Children of the Different is the self-published debut novel from author S C Flynn and one I quite enjoyed. There is a very distinct Australian feel to the book, a country I am very familiar with, as I live here. At times you can feel the dry of the land and the heat in the air as the story unfolds. The use of the Australia, as well as its distinct flora and fauna gives the story a very grounded narrative.

Generally YA is not a category I read in, but the story carried me along nicely and kept me reading. The narrative is uncomplicated and leads the reader along slowly before a more energetic conclusion. The benefit of this is the plot development of the characters and the world is more organic.

The main protagonists, Narrah and Arika, 13 year old twin brother and sister have begun their journey into adulthood, the consequence of this in their post-apocalyptic world is a mystic transformation. Living away from the cities, the surviving adults from the Great Madness try to protect and shelter the children from the old world, with its wars and unintended consequences. The anxiety, confusion and doubt you would expect from new teens and breaking away from the only lives they know comes across in the telling as the pair discover their new found abilities and a danger which threatening their freinds, their world and their lives.

The villain, an unknowable and malevolent entity keep Narrah and Arika guessing as they try to stop its plans. I liked that there wasn’t (to me anyway) any clues to the villain’s identity until the concluding chapters, it added to the mystery and dynamic as the each begins their odyssey, emotionally and geographically, overcoming the obstacles in their paths.

As a stand alone piece of work the story is well thought out, there are some good twists and turns before you come to a satisfying conclusion. I would recommend.
Read more
Helpful
Comment Report abuse
See all reviews from Australia

june finnigan - writer
5.0 out of 5 stars A brilliant and vivid survival story
Reviewed in the United Kingdom on 13 September 2016
Verified Purchase
Based in a fantasy world yet so close to being a real scenario, a brain disease kills off most of the human race. Twins, a brother and sister, at only thirteen start going through the change that will either give them special powers or turn them into mad eaters of human flesh. A terrifying journey of survival and discovery. Brilliant plot and gripping page turner.
June Finnigan - Writer
Read more
Helpful
Sending feedback...
Thank you for your feedback.
Sorry, we failed to record your vote. Please try again
Report abuse

I would recommend this.
Read more
One person found this helpful
Helpful
Sending feedback...
Thank you for your feedback.
Sorry, we failed to record your vote. Please try again
Report abuse

RedStarReviews
5.0 out of 5 stars A Bright Shining Star Of A Story
Reviewed in the United States on 11 September 2016
Verified Purchase
This is an excellent book. Set in a post apocalyptic Australia this story of twins will draw you in right from the start and hold onto you until (and beyond) the ending.

I was asked by the author to read and review this book prior to its upcoming release and not only was I honored to do so, I was excited to do so once I heard the description of the story.

From start to finish this adventure keeps you engaged and turning page after page as you follow along with the heroes. The primary characters and secondary characters have depth and history to them. The story is well laid out, yet just when you think you've figured it all out the author masterfully throws in a good twist to the plot just to keep you guessing and moving along to the resolution at the end of it.

As stated I truly enjoyed this story and I hope to see these characters and this world again in another book soon! I do strongly recommend Children Of The Different to y'all!
Read more
3 people found this helpful
Helpful
Sending feedback...
Thank you for your feedback.
Sorry, we failed to record your vote. Please try again
Report abuse