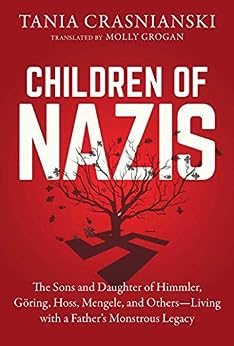 Children of Nazis: The Sons and Daughters of Himmler, Göring, Höss, Mengele, and Others— Living with a Father's Monstrous Legacy Kindle Edition

"How does one live with the burden of evil ancestry? There is no user's manual. The children of high-ranking Nazis coped in remarkably varied ways. Tania Crasnianski has researched their stories carefully and tells them strikingly."—Robert O. Paxton, professor emeritus of history, Columbia University

"A most interesting read, though at times a grim one."—Susannah Fullerton, author of Celebrating Pride and Prejudice: 200 Years of Jane Austen's Masterpiece

"Forays such as this into the underbelly of human history make for demanding reading, but they are necessary if history is to be kept from repeating itself, and Crasnianski is to praised for her diligence and candor."—Booklist

"A fascinating read . . . Crasnianski is able to tell the story from a unique vantage point, one that distinguishes her book from others on the subject."—Aish.com

"The author brings to light the fate of children who, after the fall of Nazism, found themselves facing the monstrous reality of their parents, as they considered them until then like heroes. . . . A documentation of family, memory and history."—Le Point (France)

"A first successful book on a particularly scabrous subject."—Figaro (France)

"Tania Crasnianski refrains from making judgments about the behavior of the children of the main actors of the Third Reich. [Children of Nazis] reflects the attitude of each child in how they understand a history broader than their own."—Le Journal du Dimanche (France)

"Tania Crasnianski . . . does not make a plea for these voluntary or involuntary criminals, stubborn or repentant. She brews a series of portraits, a mosaic of destinies . . . which draw a fresco of the great History."—Sputnik France

"A sobering read. These children were raised in the cult of the Third Reich, and were indoctrinated in those Aryan philosophies. Some managed to break free, but some did not."—Switftlytiltingplanet.com --This text refers to the paperback edition.

Tania Crasnianski was born in France of a German mother and French-Russian father. Children of Nazis is her first book. She is a criminal lawyer and lives in Germany, London, and New York.

Molly Grogan is a cultural journalist, educator, and translator who has written extensively on Francophone postcolonial literature and modern theater in Europe and North America. She holds a PhD in French and comparative literatures from the Sorbonne and a master’s in linguistics from the Université Paris V René Descartes.
--This text refers to the paperback edition.

4.3 out of 5 stars
4.3 out of 5
358 global ratings
How are ratings calculated?
To calculate the overall star rating and percentage breakdown by star, we don’t use a simple average. Instead, our system considers things like how recent a review is and if the reviewer bought the item on Amazon. It also analyses reviews to verify trustworthiness.

Amazon Customer
4.0 out of 5 stars A thought provoking read
Reviewed in Australia on 6 June 2018
Verified Purchase
Interesting read but disappointing in that not all the children were interviewed. A sad view of their parents war crimes, which a lot of them agreed with.
Read more
Helpful
Report abuse

reader
5.0 out of 5 stars Very interesting
Reviewed in Australia on 12 August 2020
Verified Purchase
This book delves into a question never asked, how did the families of the Nazi officers feel, how were they treated after the war. Extremely interesting as it was never something we thought about. Well written
Read more
Helpful
Report abuse
See all reviews

Mrs. M. M. Starkey
3.0 out of 5 stars INTERESTING
Reviewed in the United Kingdom on 10 August 2019
Verified Purchase
This was a very interesting read from a point of view that I had never considered before. History has categorized their parents as evil masterminds of the worst atrocities imaginable but gives little or none consideration to their family life. How a child of such individuals comes to an understanding of the roles they undertook whilst they walked in their shadows - or in some cases openly walking with them is hard to imagine. This book has attempted to address this and for me this was the only time I have ever given consideration to them and how history has dealt each of them a hand they have been forced to play. I have found it a very interesting read.
Read more
4 people found this helpful
Report abuse

Palwebstar
3.0 out of 5 stars Interesting book with bad German mistakes
Reviewed in the United Kingdom on 31 August 2019
Verified Purchase
The book itself is good. It is translated from French, which is mostly fine, but either the original author or the translator (or both) was really, really bad at German. This is very often wrong, with basic sloppy, careless howlers. Also, the translator specially notes at the beginning that he/she has not looked up the German sources. This means that we are often reading an English translation of a French translation of German text. This is shoddy, frankly.
Read more
4 people found this helpful
Report abuse

E. Parkinson
5.0 out of 5 stars Interesting
Reviewed in the United Kingdom on 4 August 2018
Verified Purchase
I really enjoyed this book, it talked about the way the children of famous Nazis coped post war with the knowledge of their fathers' behaviour and choices during the war. Their coping mechanisms varied, and it was interesting to read how they did cope - and in the case of some of them, how not just one of their children coped, but how a number of them coped.
Read more
3 people found this helpful
Report abuse

Debz
5.0 out of 5 stars Excellent book
Reviewed in the United Kingdom on 22 April 2020
Verified Purchase
A chilling insight to the children of Nazi’s, some learnt from their fathers mistakes others revered them, very interesting and informative, recommended read
Read more
One person found this helpful
Report abuse

Jim B
5.0 out of 5 stars Insightful
Reviewed in the United Kingdom on 21 June 2018
Verified Purchase
Insightful and penetrating studies of the children of the Nazi leadership - difficult in places as some of the stories are harrowing to say the least. An excellent addition to the history of WWII.
Read more
2 people found this helpful
Report abuse
See all reviews
Back to top
Get to Know Us
Make Money with Us
Let Us Help You
And don't forget:
© 1996-2021, Amazon.com, Inc. or its affiliates