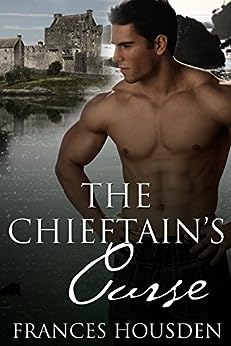 by Frances Housden (Author) Format: Kindle Edition
See all formats and editions
Sorry, there was a problem loading this page. Try again.

Euan McArthur is a chieftain in need of an heir.

While still a young a warrior, Euan incites the fury of a witch. She retaliates with a curse that no wife will ever bear him an heir. As he buries his third wife and yet another bonnie stillborn son, Euan can no longer cast her words aside.

Morag Farquhar is a woman in need of sanctuary. With a young relative in tow, Morag flees the only home she has ever known to escape her brother, Baron of Wolfsdale, and find sanctuary in the MacArthur stronghold. Pronounced barren by a midwife, Morag is of little value to her family, but a Godsend to Euan, a lover he can’t kill by getting with child.

Years ago, chance drew them together, and tangled their lives in ways they could never have imagined. This time their destiny lies in their own hands, but it will take courage and strong hearts to see it through to the end.Praise for THE CHIEFTAIN'S CURSE:

Frances Housden lives in New Zealand-a beautiful country not so very different from Scotland, where she was born. She began her career as a published writer after winning Romance Writers of New Zealand's prestigious Clendon Award. She went on to pen six very successful novels for Silhouette Books, where she merged her penchant for characterisation with her love of suspense. She is now delving into the world of historical romance, using her love of history to take her readers on an exciting trip into the lives of memorable characters. --This text refers to an out of print or unavailable edition of this title.

4.2 out of 5 stars
4.2 out of 5
150 global ratings
How are ratings calculated?
To calculate the overall star rating and percentage breakdown by star, we don’t use a simple average. Instead, our system considers things like how recent a review is and if the reviewer bought the item on Amazon. It also analyses reviews to verify trustworthiness.

Love 2 Read
1.0 out of 5 stars What a waste of time and money
Reviewed in Australia on 5 June 2016
Verified Purchase
See my review for Chieftan by Command. This is the first book in the series. I bought the second one by mistake and had to come back to buy this one. What a waste of time and money. Badly written, predictable and extraordinarily shallow story. Life's too short. I got what I paid for - my advice? Pay a few dollars more and get a properly edited, quality book.
Read more
Helpful
Report abuse

Maria Tippett
5.0 out of 5 stars Loved this book
Reviewed in Australia on 2 June 2015
Verified Purchase
I so enjoyed this book. Loved the plots, twists and turns. Loved the love between the heroine and the hero. I look forward to reading more of this authors work.
Read more
Helpful
Report abuse

Lorelei Kiernan
5.0 out of 5 stars Enjoyable read
Reviewed in Australia on 28 January 2014
Verified Purchase
I enjoyed this book. Has a good storyline with twists in the plot. Will read more from this author.
Set in a time long gone and if you enjoy historical stories this won't disappoint

Reading Queen
5.0 out of 5 stars Loved it!
Reviewed in the United Kingdom on 4 March 2016
Verified Purchase
This is my first Frances Housden book and I loved it. As a fan of historical romance this was perfect. Morag and her brother Rob flee from home after the mysterious death of her father. She is sure her brother and his close companion Kalem the Moor are responsible and she also knows he will be in pursuit. Because he plans to kill Rob to ensure he has no opposition when he claims the baronetcy. Morag reaches her destination, Castle Cragenlaw where she knows she will find Euan McArthur and sanctuary. For Euan and herself share a history and there are things she needs to tell him. However on arrival she finds his wife in labour and learns that The McArthur is cursed as every wife he takes dies in childbirth. In the wake of yet another tragedy Euan takes Morag as his leman. He will not marry until he finds the witch who cursed him sand removes the curse that none of his wives will ever birth a live baby. Morag knows she is barren so he feels safe...but the story is only about to begin.
Read more
Report abuse

Old Romantic
4.0 out of 5 stars Heroes and heroines
Reviewed in the United Kingdom on 30 January 2016
Verified Purchase
First time I've read this author's books. Loved the characters and the story. Pity it had the usual e-book problem, nobody proof-read it. These books seem to rely on spell check which doesn't always work. Extra words and omitted words are common in this book and the subsequent ones. Maybe no-one else notices if they didn't have a career as a proper secretary before retiring. Still a good read nevertheless.
Read more
Report abuse

Kindle Customer
3.0 out of 5 stars Enjoyable
Reviewed in the United Kingdom on 13 December 2014
Verified Purchase
If you enjoy Scottish highland adventures with warriors wielding swords by day and loving strong women by night then this book will keep you happy. I also like books where you get both the man and woman's insight. New to this author but I think I shall be returning as she appears to have introduced us to a host of characters who gain their own stories.
Read more
Report abuse

Kindle Customer
4.0 out of 5 stars Quite good
Reviewed in the United Kingdom on 26 May 2015
Verified Purchase
A reasonable story line but a bit slow at times. At one point I was wishing that something would happen to liven things up. The plot could have been better developed and more intricate.
Read more
Report abuse

Promises to keep
5.0 out of 5 stars The Chieftain Curse
Reviewed in the United Kingdom on 29 March 2015
Verified Purchase
This book has a lot of twists and turn,s banning a bit slow but it's a very good story line and brilliant character you smile and cry good read Margaret parkhill
Read more
Report abuse
See all reviews
Back to top
Get to Know Us
Make Money with Us
Let Us Help You
And don't forget:
© 1996-2022, Amazon.com, Inc. or its affiliates