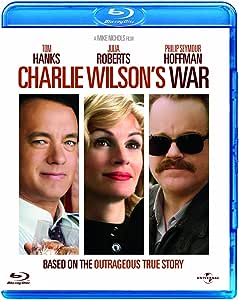 Secure transaction
Your transaction is secure
We work hard to protect your security and privacy. Our payment security system encrypts your information during transmission. We don’t share your credit card details with third-party sellers, and we don’t sell your information to others. Learn more
Details
Ships from
Amazon US
Sold by
Amazon US

All Regions blu-ray release, playable on all worldwide blu-ray players.

Oscar nominated drama starring Tom Hanks, Julia Roberts and Phillip Seymour Hoffman. Based on the book by George Crile, the movie tells the story of how one congressman who loved a good time, one Houston socialite who loved a good cause and one renegade CIA agent who loved a good fight conspired to bring about the largest covert operation in history. In the early 1980s, Charlie Wilson (Hanks) is a womanising US congressional representative from Texas. With the help of maverick CIA agent, Gust Avrakotos (Hoffman), Wilson dedicates his political efforts to supply the Afghan mujahideen with the weapons and support required to defeat the Soviet Union. However, Charlie eventually learns that military victory can only be achieved at a great price.

4.6 out of 5 stars
4.6 out of 5
656 global ratings
How are ratings calculated?
To calculate the overall star rating and percentage breakdown by star, we don’t use a simple average. Instead, our system considers things like how recent a review is and if the reviewer bought the item on Amazon. It also analyses reviews to verify trustworthiness.

ellison
4.0 out of 5 stars Fighting the Russians!
Reviewed in Australia on 3 January 2018
A congressman is able to raise funds for a small country to defend itself against attacking Russians, engaging and insightful true story.
Read more
Helpful
Report abuse
See all reviews

Mark Pack
4.0 out of 5 stars The combination of ingredients should make this an amazing film, but it falls just short
Reviewed in the United Kingdom on 18 May 2016
Verified Purchase
A wild, wacky but true story of an outrageous character who changed the course of the world. A screenplay by The West Wing maestro Aaron Sorkin. An all-star cast which is also an all-talented cast including the likes of Philip Seymour Hoffman.

Those should be the making of an amazing film. And they nearly are. Nearly, but not quite.

Charlie Wilson's War is the real life story of how an undistinguished American congressman found a purpose to his political career beyond enjoying the drink, drugs and women - helping the Afghan opposition to the then occupying Soviet military forces. What started as a relatively small $5 million increase in US covert funding for the Afghan opposition spiralled over time into a multi-billion dollar operation.

Tempting as it is to exaggerate the impact of any one person when retelling part of history, in this case most of that change in support for the Afghan opposition - and the huge influence it had on defeating the Soviet military - does indeed seem to be down to Charlie Wilson.

The real man himself features in two fascinating extras on the DVD and in the actual film is portrayed skillfully by Tom Hanks. Many of the other performances are also fine, and the script sizzles at times with Sorkin's trademark intense verbal wit. But the film also has its flaws, such as the uneven interweaving of at times surprisingly amateurish looking attempted footage of war scenes.

So a very enjoyable film about a fascinating example of a politician finding a way to use a relative humble position in the political pecking order to change the world - but not quite the all-time classic movie its ingredients gave hope for.

One annoyance about the DVD - it comes with an enforced, non-skippable, four minute long advert at the start. The advert is for a good cause (UNICEF) but even so, it's a long sequence to be forced to watch.

Paul Norton
3.0 out of 5 stars Beware the long (over five minutes) non skipable/ non fast forwardable advert at the start of DVD.
Reviewed in the United Kingdom on 31 December 2017
Verified Purchase
Not as good as I remembered it to be. Not one of Hanks best films. The DVD has a 5 plus minutes advert about AIDS in Africa voiced by a droning Gwyneth Paltrow. You cannot skip or fast forward this ad and you are forced to watch it every time you view the film. Frankly after two minutes of the ad I wanted to take the DVD out and burn it on the fire, after 3 minutes I wanted to throw myself under a bus. Not worth returning. will take to charity shop.
Read more
One person found this helpful
Report abuse

Mr. P. Shaw
2.0 out of 5 stars UNCONVINCING
Reviewed in the United Kingdom on 3 August 2016
Verified Purchase
I purchased this since I have an interest in the period and subject. Although the story, (previously unknown to myself), was interesting the film did not really convince. Tom Hanks is just not "sleazy" enough for this role and there was no chemistry between him and Julia Roberts. Philip Seymour Hoffman (usually an excellent actor- sadly missed) was not really given much chance by the director.
This could have been made with unknown actors in a far more convincing way- although, of course, it would have had very little "Box office" appeal..
Read more
Report abuse

Mervyn Hagger
5.0 out of 5 stars THERE IS SOMETHING IN THE WATER IN TEXAS
Reviewed in the United Kingdom on 29 November 2013
Verified Purchase
Texans are individualistic. Having lived for most of my life in Texas I have a pretty good understanding of what makes Texans tick. "I wasn't born in Texas, but I got here as quickly as I could" (to coin a bumper sticker.) Texas is big and it used to be brash (not so much after the invasion by Yankees following the gas crisis of the Seventies), but its stock born before then thought that they could do anything, anywhere at anytime they chose to do it, and they could do it better than anyone else. Their "s*** or get off the pot" mentality is catching, but it sometimes leads to a Houston women with a bundle of money giving it to a Congressman from Texas who thinks that he can create a foreign policy all of his own, by creating his own armed forces. Thus we have Charlie Wilson's War. A true story, but a headshake for its stupidity of meddling in foreign affairs that only made a bad situation worse.
Read more
One person found this helpful
Report abuse

Brummy D
3.0 out of 5 stars Fact vs Fiction
Reviewed in the United Kingdom on 26 November 2012
Verified Purchase
After the compulsory sanctimonious lecture on HIV, this is a witty and intelligent film, with excellent acting. Unfortunately the extras consist of those involved describing how wonderful each other are; predictable behaviour from self-obsessed over-privileged adolescents, but behaviour adults should avoid if they dislike being sniggered at.
The film's account of historical events should not be confused with History. The Berlin wall falling had nothing to do with Russian defeat in Afghan, and everything to do with events in Eastern Europe and Gorbachev's refusal to send in the tanks. Gorbie, not Charlie, was the real hero in the downfall of Soviet totalitarianism. Arming and training the Mujahiddin may have seemed a good idea at the time, but it is difficult to see how that helped anyone in the refugee camps to a better life. The same Mujahiddin, trained and armed by the USA, having killed lots of Russian conscripts, then went on to kill lots of Americans and Brits across the globe. The same people are still killing Americans and Brits in Afghan today; thanks a bunch Charlie.
Read more
Report abuse
See all reviews
Back to top
Get to Know Us
Make Money with Us
Let Us Help You
And don't forget:
© 1996-2021, Amazon.com, Inc. or its affiliates