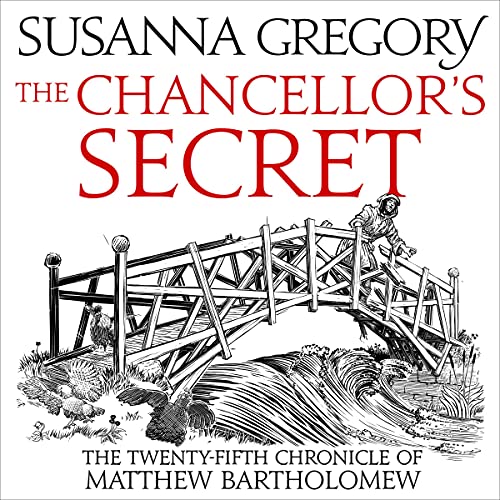 The Chancellor's Secret: The Twenty-Fifth Chronicle of Matthew Bartholomew

There are 0 reviews and 20 ratings from Australia

Clemens A. Schoonderwoert
5.0 out of 5 stars A Most Wonderful Bartholomew Farewell!
Reviewed in the United Kingdom on 16 September 2021
Verified Purchase
This amazing medieval mystery is the 25th and at the same time a marvellous sending off of the brilliant "Matthew Bartholomew Chronicles", from the formidable author, Susanna Gregory.

Storytelling is as ever of a top-notch quality, the story is superbly executed, all characters, whether great real historical or fantastic fictional, come vividly to life within this astounding medieval mystery, and the times and atmosphere of Cambridge in the 1360s come brilliantly off the pages.

At the beginning of the book you'll find a well-drawn map of Cambridge in the AD1360s, while at the end you'll notice an Historical Note, where the historical details concerning certain people and places are wonderfully described and explained by the author.

The book starts off with a short prologue, set in early June, AD1360, with the murder of John Baldok by unseen hands, and this murder is the prelude of much more mayhem and murders to come.

The main story is set in the very hot month of July, AD1360, with on the one hand the Benedictine Brother Michael, who after having been voted Chancellor of the University of Cambridge, is in the background dealing and negotiating with three of the King's Vicars-General about his appointment and other secret things concerning Cambridge University, namely William Teofle, John Tinmouth and Thomas Ely, while on the other hand our main protagonist, the Physician Matthew Bartholomew, is left mainly on his own with the investigations of the increasingly number of murders in Cambridge, but later on he will be assisted by the Franciscan, Father William, and in his own remarkable way, the unforgettable Dominican and animal-whisperer, John Clippesby.

What is to follow is an action-packed and tremendous medieval mystery, where Matthew has his hands full in his attempts to solve these murders and sometimes he will also be heading in the wrong direction, before important pieces will finally fall into place, and this puzzle of mayhem and murders will be completed when all the pieces are fitted together and the culprit(s) are revealed in a most dramatic fashion, and this incredible series will thus also end in a most compelling and enjoyable way with Matilde and Matthew finding their domestic bliss.

Highly recommended, for although this is the last exploit of Matthew and Michael, let it be said that this final episode is an excellent, exciting and thrilling volume, and that's why I want to call this fantastic outing: "A Most Wonderful Bartholomew Farewell"!
Read more
2 people found this helpful
Report abuse

E B Sowerby
5.0 out of 5 stars Last Matthew and Brother Michael
Reviewed in the United Kingdom on 8 August 2021
Verified Purchase
Loved this book as always. A convoluted tale of murder and betrayal with a satisfying conclusion. However pleasr, please, don't let this be the last we hear of Matthew Bartholomew and Brother Michael, they really are too good to let go altogether.
Read more
4 people found this helpful
Report abuse

DIANA E MORGAN
2.0 out of 5 stars Disappointed
Reviewed in the United Kingdom on 11 August 2021
Verified Purchase
I was disappointed with this book. Normally I love the Matthew Bartholomew books but this one felt formulaic and the lack of continuity in the characters lives and personalities was annoying. For example Dickon suddenly becomes a coward despite the fact that in previous books he has fought bravely when much younger. I'd love to know what happened to Cynric's wife too, she disappeared two books ago.
The body count in this book is ridiculous and the murders very far fetched, the plot didn't make sense. The new characters in this book were poorly drawn and it was difficult to get a handle on what they were like.
The new senior protector was ridiculous in previous books he wouldn't have been tolerated for a moment.
Then the ending was sugar coated for Matthew and Mathilda to live happily ever after,altogether not up to her usual standard.
Read more
3 people found this helpful
Report abuse

Mrs. Be Rodgers
5.0 out of 5 stars Amazing storyline
Reviewed in the United Kingdom on 10 August 2021
Verified Purchase
Hooray my new book,oh dear what is this on the sleeve last ever one.I can't believe there will be no more,the characters have become like friends over the years and I will miss them. Susanna Gregory has excelled herself this time the plot is fantastic and the twist at the end breath taking. With all the familiar characters and a couple of new ones the story contains some amazing revelations,I was going to ration my reading but couldn;t as I wanted to see who were the culprits. I would like one more a few years on to see how everyone is getting on PLEASE.
Read more
One person found this helpful
Report abuse

Ms. P. E. Ennis
5.0 out of 5 stars cracking good read
Reviewed in the United Kingdom on 13 October 2021
Verified Purchase
This many stranded story and the underlying tale of a bridge that still stands to this day, holds the attention to the end. It certainly brought the ancient town of Cambridge to life, sinuously winding the words around the streets and the university and the inhabitants to give us an understanding of life in those times. As in the title, a cracking good read and great fun.
Read more
Report abuse
See all reviews
Back to top
Get to Know Us
Make Money with Us
Let Us Help You
And don't forget:
© 1996-2021, Amazon.com, Inc. or its affiliates