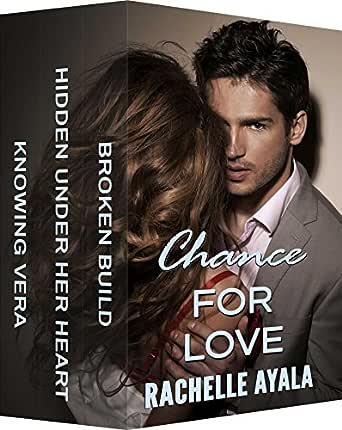 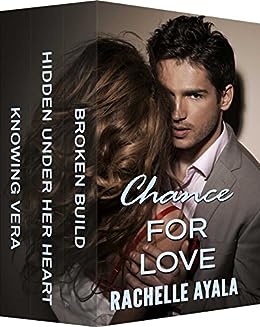 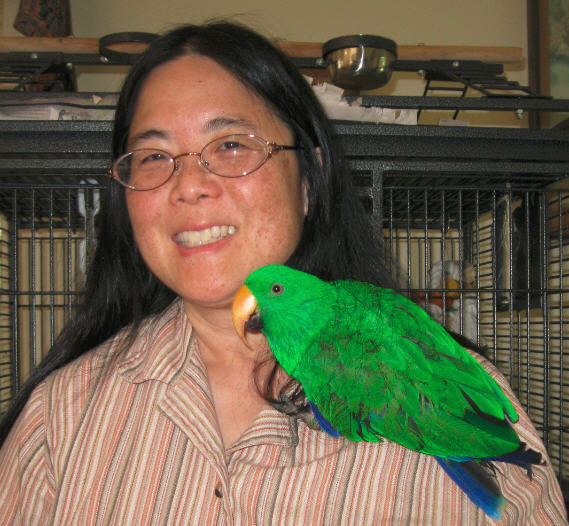 miranda
5.0 out of 5 stars Rachelle has done it again - absolute superb
Reviewed in the United Kingdom on 27 October 2014
Verified Purchase
This box set had me hooked from the get go, knowing Rachelle's style of writing I knew I would not be disappointed plus I had read knowing Vera already so the expectation was high and she did not disappoint. In this box set each book is connected to each other in the most special and romantic way. I loved it and I recommend it highly.
Read more
Helpful
Sending feedback...
Thank you for your feedback.
Sorry, we failed to record your vote. Please try again
Report abuse

Sherelle Ellis
5.0 out of 5 stars Worth the read....TOTALLY worth it
Reviewed in the United States on 12 May 2017
Verified Purchase
Review for Broken Build

This was a thrill ride from the very beginning. Even the cover screams secrets and intrigue. Quite honestly, the story delivers on that in spades, it even surprised me on occasion.
Well done.

Review for Hidden Under Her Heart

This story was heartrending, though it admittedly caused me to ask some questions that I have been informed are abnormal. I wonder what it was that occurred to cause Barry's character to behave the way he did in the story (to the outsider it would appear that he had gotten everything he had wanted yet he was resentful toward Maryanne). It also shook my absolute stance on rape, though not intentionally and affirmed my feelings on abortion (not that I'm judgemental, I believe everyone has their own reasons for their choices)
Over all,this book caused me to THINK, a fact that made it both difficult and fulfilling to read.

Okay
This story was convoluted to the point where it actually became confusing, especially where paternity and family matters came into play. Very and Zach had a lot of twists in the road to their relationship, which made me conclusion more satisfying. At least for me personally.
Read more
One person found this helpful
Helpful
Sending feedback...
Thank you for your feedback.
Sorry, we failed to record your vote. Please try again
Report abuse

Jen Jones hides a horrible past behind her new degree,toned body and exciting job at silicon valleys hottest start up. She even gets plastic surgery and changed her name so no one can recognize her from years ago. In hopes for a better life but images can't change everything not even her heart and it haunts her. She lives with her guilt of her past. In order to move on she must forgive and forget. But It can't change the fact that she loves a man she wronged. Now she works for his company. Things get to close for comfort when Dave the guy Jen's in love with shows interest in her. Romance blooms, but secrets play Jen's heart. When Rey Custudio a man that's out to take what he can from Jen, is murdered while waiting for Jen to finish a job. All suspicion falls on Jen. The relationship falls apart and trust becomes in issue between Jen and Dave. Secrets emerge and lies unfold. Jen learns beauty is only skin deep. CEO and founder Dave is about to land a huge deal. He doesn't need blood on his car, threatening phone calls, and Jen wrapped in broken code and blackmail. A gang of thugs hunts Jen and she takes refuge in Dave's protective arms. Together they must find a killer and rescue an innocent victim from their past. Can love prevail and trust be gained or will the past destroy what they have. Will Dave love her for who she is or even forgive past indiscretions if the truth unfolds.

Hidden under her heart

Maryanne Torres and Lucas first meet, Lucas plays a ridiculously immature prank on her who's on duty in her job as a nurse. Maryanne is equally immature her self by vowing to remain celibate til she finds the right man. Then when she and Lucas go on their first date, she teases, flirts and makes it seem as if she'd like more. All she really wants is to be loved. Choices are made by both of them forcing them to grow up and face their demons. Despite Maryanne's many failed relationships, she tries to be a good person for Lucas trying not to be to clingy or needy. She ends up pushing him away and falls victim for a guy.she goes to a party and given the date rape drug at the pastors party. Lucas is only concern was winning the iron man triathlon until the morning he finds Maryanne unconscious in the church parking lot. He becomes the prime suspect even though she can't Id her attacker. She doesn't remember her night or the rape or who did it. Lucas is framed for the rape by the crazy church whose party she attended. Eventually she finds out she pregnant. Maryanne wants justice but the identity of her rapist is hidden in the baby that she plans to abort. Lucas races to clear his name and keep Maryanne's secret from drowning her and the baby. Maryanne and Lucas have to deal a lot in their lives. They end up having a on and off relationship. They can't see eye to eye on many things including her abortion.

Great written book about dealing with rape, pro life and pro choice issues.
Profanity never used gods name in vein. If your turned of by profanity I would caution you
Real tear jerk has a strong message

Vera is afraid to commit into a relationship but is starving for love. She has a fling with a former triathlete Zach Spencer. She can't let her self fall for him, and he thinks it's because he lost his leg in a tragic accident. Vera's a nurse though and doesn't care about the injury. Her problem is more serious. She's afraid to tell Zach that her father killed his mother.Deep down she doesn't think her father did it though. Can their timing be so wrong. Vera has been receiving messages from her father but she witnessed him jump from the Golden Gate Bridge when she was young. Did he possibly survive that jump. That leads her to find the truth in a quest to Australia. Where she hopes to find the real murderer but Zach and Cliff come to protect her. Two guys try to get her alone. They claim they want to keep her safe and help her father. Can she trust either of them. Who really killed Zach's mother. She had witnessed the murder but she can't remember what happen. As Vera navigates through deceit and danger. She loses her heart and her will power.

Kindle Customer
3.0 out of 5 stars ONE OUT OF THREE
Reviewed in the United States on 24 November 2014
Verified Purchase
1. BROKEN BUILD - I admit to being a complete computer ignoramus. Therefore this novel placed in Silicon Valley with each character spouting complicated computer lingo should have made me go screaming for the hills. But no way! Rachelle Ayala's characterizations and plot twists are mesmerizing. You are drawn into the world of Jen and Dave. You care about them and you root for them as they struggle with their problems. Poetic license was stretched in noting the parentage of some characters. To avoid spoiling this novel for others, I won't go in detail about this matter. However, I feel this issue did not enhance this book. It added a level of confusion unnecessary in this good novel. Nevertheless, I enjoyed this book immensely and highly recommend it to others. BRAVO Ayala!!
2. HIDDEN UNDER HER HEART - This novel was a disappointment. I thoroughly enjoyed the previous one in this set. However, I found the multiple plot twists in this novel confusing and often inconsistent as were the characters. The book was more a treatise on the author's beliefs regarding religion and abortion than a romance novel. Of course, a writer has a right to do this. Nevertheless as a reader of romance novels, I do not expect the preaching to overshadow the genre. I am hopeful KNOWING VERA, the final novel in this trilogy, will renew my enthusiasm for Ayala' s works.
3. KNOWING VERA - REGRETFULLY, IT DIDN'T!!
Read more
2 people found this helpful
Helpful
Sending feedback...
Thank you for your feedback.
Sorry, we failed to record your vote. Please try again
Report abuse

Amazon Customer
5.0 out of 5 stars Five Stars
Reviewed in the United States on 24 July 2014
Verified Purchase
this is a great collection of love story's and it an easy read i love it!
Read more
One person found this helpful
Helpful
Sending feedback...
Thank you for your feedback.
Sorry, we failed to record your vote. Please try again
Report abuse

Zanyelli
4.0 out of 5 stars Rachelle Ayala writes inside and outside of the box, and maybe even around it too.
Reviewed in the United States on 13 June 2014
Verified Purchase
This is a steal getting these 3 books for this price! WOW!

Hidden Under Her Heart was my favorite as it was a softer romance book. You will not be disappointed with these books. The price is outrageous cheap for the content! I received this product for free in exchange for an unbiased review.
Read more
4 people found this helpful
Helpful
Sending feedback...
Thank you for your feedback.
Sorry, we failed to record your vote. Please try again
Report abuse

NC Shopper
5.0 out of 5 stars Good reads
Reviewed in the United States on 24 May 2014
Verified Purchase
I liked this set...they were connected but also good to read separately. I liked the plots and twists and the fact that no one in the books was perfect. They all had issues, which made them more "human". I enjoyed all three books in this three pack. Rachelle Ayala is a sensitive and thoughtful author.
Read more
3 people found this helpful
Helpful
Sending feedback...
Thank you for your feedback.
Sorry, we failed to record your vote. Please try again
Report abuse

Denise domning
5.0 out of 5 stars Chance for Love
Reviewed in the United States on 1 October 2016
Verified Purchase
Good I enjoy the stories. I will look for other BOOKS by them. I have gotten to like more authors then I usually have read.
Read more
One person found this helpful
Helpful
Sending feedback...
Thank you for your feedback.
Sorry, we failed to record your vote. Please try again
Report abuse

EulaliaLikes2Read
3.0 out of 5 stars Okay
Reviewed in the United States on 29 July 2014
Verified Purchase
These books were filled with suspicion, love with a little of the WORD thrown in. Some scenes in all the books go from memory to the present in the same paragraph. This made it hard to follow the story. It was like you were talking faster than you were writing.
Read more
2 people found this helpful
Helpful
Sending feedback...
Thank you for your feedback.
Sorry, we failed to record your vote. Please try again
Report abuse

Triple Boot
2.0 out of 5 stars Two Stars
Reviewed in the United States on 10 November 2014
Verified Purchase
The stories seemed to last longer than they should have.
Read more
Helpful
Sending feedback...
Thank you for your feedback.
Sorry, we failed to record your vote. Please try again
Report abuse