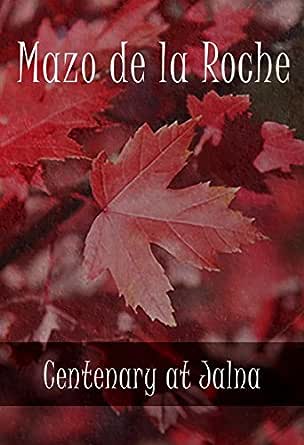 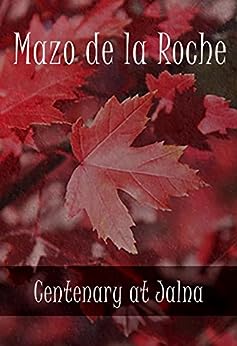 Centenary at Jalna brings us to 1953 when the Whiteoaks gather to mark the 100th anniversary of their estate. It has now been a century since Captain Philip and Adeline Whiteoak arrived in Canada and built their legacy. While this should be a time of festivity for the clan, tension and discontent surround the forthcoming marriage of a new generation: Adeline and Philip, grandchildren of the originals.
To make matters worse, young Dennis risks tragedy and Wakefield finds himself in a doomed relationship. As the celebrations loom closer, the question remains. Will the Whiteoaks be able to overcome their difficulties one last time?

Mazo de la Roche, in 1927, was an impoverished writer in Toronto when she won a $10,000 prize from The Atlantic Monthly for her novel Jalna. The book became an immediate bestseller and was eventually adapted for stage, screen, and television.
click to open popover

Kindle Customer
4.0 out of 5 stars CENTENARY AT JALNA
30 March 2013 - Published on Amazon.com
Verified Purchase
I have always loved this series....however,the Kindle ediditions, need a good proof reader ,they are loaded with typos.If you can,overlook those flaws....this is a very enjoyable book,even if a trifle dated.
Read more

smoke
5.0 out of 5 stars Centerary at Jalna
18 January 2013 - Published on Amazon.com
Verified Purchase
This is the last book of the Jalna series and I read it as slowly as I could, knowing it to be the last.
Read more

Jenny C.
5.0 out of 5 stars So sad to get to the end!
2 March 2013 - Published on Amazon.com
I Just recently found this series and loved it from the start. I too read the last book slowly to make it last. What a wonderful author!
Read more
Go to Amazon.com to see all 3 reviews 4.6 out of 5 stars
Get FREE delivery with Amazon Prime
Prime members enjoy FREE Delivery and exclusive access to movies, TV shows, music, Kindle e-books, Twitch Prime, and more.
> Get Started
Back to top
Get to Know Us
Make Money with Us
Let Us Help You
And don't forget:
© 1996-2020, Amazon.com, Inc. or its affiliates