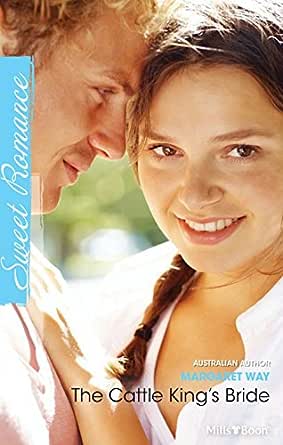 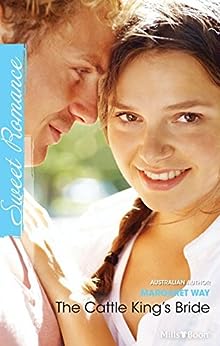 Margaret Way takes great pleasure in her work and works hard at her pleasure. She enjoys tearing off to the beach with her family at weekends, loves haunting galleries and auctions and is completely given over to French champagne ‘for every possible joyous occasion’. She was born and educated in the river city of Brisbane, Australia, and now lives within sight and sound of beautiful Moreton Bay.

John Christie
4.0 out of 5 stars The Cattle king' Bride.
Reviewed in the United Kingdom on 29 November 2013
Verified Purchase
This book made very good reading from cover to cover I would recommend it to anyone. Not a bad book for reading.
Read more
One person found this helpful
Report abuse

Heavenlymam
5.0 out of 5 stars book
Reviewed in the United Kingdom on 18 March 2013
Verified Purchase
good storyline and like the author very much
no further comment needed although review asks for more words than I wish to add
Read more
One person found this helpful
Report abuse

doreen lilley
5.0 out of 5 stars enjoyable story of family life with an australian billionaire despot.
Reviewed in the United Kingdom on 24 June 2014
Verified Purchase
this book gives an insight into a family thrown apart by secret romances, characters are drawn strongly and true to life.
Read more
2 people found this helpful
Report abuse

Vintage Sedona
3.0 out of 5 stars Evil mother looms over romance with social class issues
Reviewed in the United States on 27 July 2017
Verified Purchase
This was more of a suspense story/psychological drama than romance despite the couple being in love since they were very young.

The gorgeous evil mother that lies, manipulates and belittles her daughter (and lusts after the hero) looms through the story. Mel, the heroine, is not the typical downtrodden little Mary Sue Martyr, but a strong career woman who is still so messed up over her mother's lack of love and position as both housekeeper and mistress to the hero's grandfather that she continues to rebuff the hero time and time again. She feels she will never fit in with his lifestyle and his "people". One of the more idiotic other women wannabees actually says, "She's not one of us," and is immediately smacked down by the other wannabe as a snob. She had felt the same way but at least feels guilty about it.

Class and social conscious in the Australian Outback run amuck as the hero tries to convince the heroine they need to be together, but her emotional damage and shame continue to keep them apart. The mother really did a case on Mel, but at some point my sympathies lay with the hero. For an alpha hero, he sure was patient.

I'm not going to get into the rest, but it's more the heroine's journey to find her father than the buildup of a romance. I enjoyed it, but would have preferred a slightly more involved ending.

SPOILER:
I was glad that the heroine's real father's family was high society and wealthy as I think she would have continued to stonewall the H.
Read more
Report abuse
See all reviews
Get FREE delivery with Amazon Prime
Prime members enjoy FREE Delivery and exclusive access to movies, TV shows, music, Kindle e-books, Twitch Prime, and more.
> Get Started
Back to top
Get to Know Us
Make Money with Us
Let Us Help You
And don't forget:
© 1996-2020, Amazon.com, Inc. or its affiliates