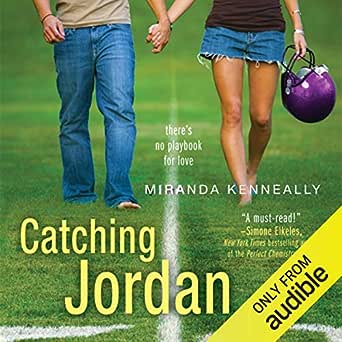 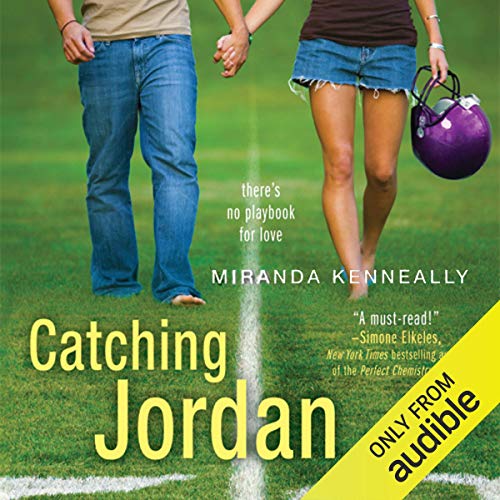 4.5 out of 5 stars
4.5 out of 5
279 global ratings
How are ratings calculated?
To calculate the overall star rating and percentage breakdown by star, we don’t use a simple average. Instead, our system considers things like how recent a review is and if the reviewer bought the item on Amazon. It also analyses reviews to verify trustworthiness.

Sian Wilson
3.0 out of 5 stars I liked this book
Reviewed in Australia on 4 August 2015
Verified Purchase
I liked this book, it was an easy weekend read with good characters and storyline. The characters and their relationships were developed well. I loved the characters of Jordan and Henry I thought the author built the story really well around them. I also didn't like the character of Ty at all, but i think that the way his character was written really contributed to the story and the development of Henry and Jordan. I also liked how the author incorporated the football elements making it easy to follow for those who know nothing of American football. I felt that the story flowed really well and made me really enjoy this book. This is the first Miranda Kenneally book I have read and after Catching Jordan I would be happy to read more. I rate this book 3.5 stars
Read more
Helpful
Comment Report abuse

David
5.0 out of 5 stars I want more from this Author.
Reviewed in Australia on 23 September 2017
Verified Purchase
I am a sports nut and I like reading romance books with good endings, so this book was made for me, It was well written and had a good story line, how could you not love Jorden and Henry, Friends for life, We could all do with friends like them.
Read more
Helpful
Comment Report abuse

BookGirl
5.0 out of 5 stars Great read
Reviewed in Australia on 31 May 2016
This book made me care about American Football because Jordan cared. Nof even Friday Night Light could do that. Entertaining with a fiesty female protagonist.
Read more
Helpful
Comment Report abuse
See all reviews

Lyndsey OHalloran
4.0 out of 5 stars Catching Jordan
Reviewed in the United Kingdom on 16 August 2013
Verified Purchase
Although not the greatest fan of sports... okay, I pretty much hate sports, I was really looking forward to reading a young adult book about the subject. Not only that, it was really different for a book with football as the main theme to have a female protagonist. This really isn't something you see a lot of in young adult books so I was ready to read something different and new.

Jordan was a fantastic protagonist. She's captain of her school's football team, the only girl on the team and the quarterback as well. If all of that wasn't enough to make her awesome, she is also better than most of the guys on the team and isn't afraid to boss them about and show them who is boss. Seriously, Jordan kicked ass. Jordan is also someone who is super smart, makes good grades and tells it how is really is. If any of the guys beat on her for being a girl, or for anything else, she puts them right back in their place.

I really enjoyed watching Jordan and her team/ friends interact. It was slightly strange to see Jordan boss everyone around and for her to have the respect of the whole team. People didn't second guess her judgement at any time and knew that she was doing the best things for the team. They were also a great bunch to read about off the field as well. As a team, the characters were really close so it was nice to see them all going out together, talking about relationships and sex etc. and for Jordan to have people she could go to if she needed to.

When new student Ty turns up, everything changes for Jordan. She's having feelings for a guy which is something pretty new to her but also, he plays the same position as she does and wants on the team. Jordan instantly likes what she sees in Ty but soon has a decision to make. Ty is also a quarterback and desperately wants on Jordan's team but she knows playing in every game is the only way that she'll get the scholarship that she wants. While she finally thinks she has found someone to be in a relationship with, Jordan also doesn't want him ruining her future and taking the spotlight away from her.

While I loved the majority of this book, Jordan and Ty's relationship was a bit hit and miss for me. While the chemistry between the two was great, some things just did not add up. Jordan is a pretty inexperienced girl but it doesn't take her very long at all to do things with Ty. When I say not long at all, it appeared to happen within a matter of days, maybe a week or so. For someone who has stayed away from relationships with boys, and hasn't ever had a boyfriend, this was just too much. Jordan's actions also didn't seem to match her personality which was a shame.

Although Jordan and Ty together was not great, I did still really enjoy this book. The plot and setting were fantastic and there are some great little twists thrown in throughout the book. Overall, this one was pretty good.

Mary-The Sweet Bookshelf
5.0 out of 5 stars Best Contemporary This Yr!
Reviewed in the United Kingdom on 17 December 2011
Verified Purchase
OhmygoshIloveditsomuch!!!! I'd seen the cover of this book out and about for the past few months and couldn't wait for its release. I bought it on my Kindle on release day. I love instant gratification. My kindle ROCKS!

This was such a great book. Jordan is quarterback and captain of her high school football team. That demands respect right there. In a way, I think that Jordan feels like most of us in high school. Different. Author Miranda Kenneally nailed this on the head. It felt very real. Jordan is trying to accomplish so much for her college career. More than that, she is making opportunity for women everywhere. Amen!

I loved that Jordan was such close friends with her teammates. I liked how they didn't treat her any different because she was a girl, but they let her know they knew she was female. I fell in love with Henry and Ty in their first scenes. I kind of had a dream with Henry in it. I LOVE HIM!! I liked that I got to know each characters back story. I'm all about understanding them more and it makes me love the story even better. I love good character development. The pace is good, and kept me reading in the middle of the night.

There is teen sex. I'm really not a fan of normalizing this, even if it IS normal in today's world. Let's not make it normal, eh? But it's here. I suppose I was super naive in high school, but seeing as it has been almost 15 yrs since I graduated high school, I don't remember much.

Overall, fantastic read! I love a good contemporary and this was definitely it!

Quote:
"I didn't know crushing on a guy would require me to up my calorie intake."
Read more
Report abuse

Michelle Cardozo
4.0 out of 5 stars Interesting and enjoyable
Reviewed in the United Kingdom on 4 October 2012
Verified Purchase
I was really excited to read Catching Jordan! I love the idea of more stories which feature female athletes. Especially female athletes that compete in a sport in which men usually dominate, such as American football. I'm not the biggest fan in the world of American football, but I've been exposed to it quite a bit over the years through TV and films. I did sort of go into Catching Jordan hoping that it was similar to Friday Night Lights but with a female quarterback. ...but it isn't. That isn't to say that it isn't enjoyable and that it doesn't provide a thought-provoking story about women in sports. It does.

But something about it also grated on me slightly. There's no way the main character of this book, Jordan, would ever wear a mini-skirt and tank top like the girl on the cover. Because Jordan is all about what other people think of her, especially her team mates. She doesn't like to show too much skin, she has rules about not dating any of her teammates. Because what she really wants is some proper respect - from her teammates, her father, and from universities that she's hoping to go to soon and play some college ball. I think what I didn't like about this book is Jordan herself. I wasn't too keen on her as a character, I didn't quite agree with a lot of the decisions that she made. My favourite aspect of the novel is the friendship and cameraderie that Jordan has with her friends and the other football players on her team. I liked that dynamic much more than Jordan's struggles with her family and university prospects or the way in which she's undecided about her feelings for new boy Ty. Interesting and enjoyable, but not my favourite.
Read more
One person found this helpful
Report abuse

Rhiannon @ Welsh Book Junkie
5.0 out of 5 stars Great Read
Reviewed in the United Kingdom on 30 August 2014
Verified Purchase
I loved the story layout and loved almost all of the characters lol. I liked the fact it was based on a girl playing football who is also the captain. I had however guessed that Sam Henry was in love with Jordan before i got too that part of the book.

The story does also show that girls/women can play in "man" sports, captain and still have the respect of her team-mates. I was NOT a fan of TY, even though he lost his dad and his mother was left paralyzed I thought he was a tad over controlling both on and off the field and I still think he had an ulterior motive with getting with Jordan.

Loved Carter he was super sweet, loved JJ he made me chuckle and thought it was sweet how him and Carter always had Jordans back even when she spoke about feelings. I'm glad that Sam got his girl eventually even if it did take him 10years lol.
Read more
Report abuse

A xx
5.0 out of 5 stars WOW!
Reviewed in the United Kingdom on 18 August 2012
Verified Purchase
I bought this book ages ago so luckily it was not Â£5.12!
its a great book, the love triangle is amazing...and when i was going through the books on kindle i had bought this one grabbed my attention straight away.
Loved Ty
Loved Henry
Loved Jordan
They werent the make believe fake characters that you cant realte to at all.
Jordan was a girl football player... come on! how could you not love that!!...now i must admit i'm not from America so i have no idea how you play american football...throwing catching WITH your hands and not kicking it about with your feet is... different. But i have seen it in films, etc etc blah blah blah so i new about it....
Reading Catching Jordan gave me something to relate too..being 'A girl gamer' etcc... its just shows how girls can do what boys can and just a well...*(If not better!)

if you read it i hope you enjoy the book :D
LOVED IT. enough said.
Read more
Report abuse
See all reviews
Get FREE delivery with Amazon Prime
Prime members enjoy FREE Delivery and exclusive access to movies, TV shows, music, Kindle e-books, Twitch Prime, and more.
> Get Started
Back to top
Get to Know Us
Make Money with Us
Let Us Help You
And don't forget:
© 1996-2020, Amazon.com, Inc. or its affiliates