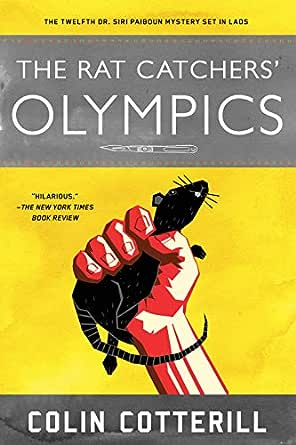 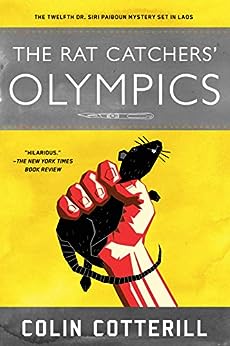 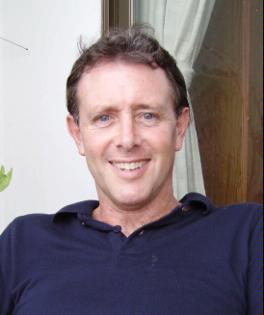 "Cotterill has a gift for tempering bad stuff--specifically, the baffling and chaotic political climate of communism circa 1980--with gently ironic humor and frequent doses of slightly kooky occultism. His books are thus a welcome balm for our own current baffling and chaotic political climate."
--The Seattle Times "Very entertaining."
--WYSO, Ohio Public Radio "The book ends with a rat-catching competition that is as bizarre as Dr. Siri's wacky sense of humor. This is a unique series."
--Dayton Daily News "The Dr. Siri books are by turns laugh-out-loud funny, sobering, convoluted, historical and endlessly entertaining . . . This series will have you reading (and laughing) well after most people in your household are sound asleep."
--BookPage, Top Pick

Praise for the Dr. Siri Paiboun Mysteries "Dazzling."
--The New York Times Book Review "Terrifically entertaining."
--The Seattle Times "Unpredictable . . . Tragically funny and magically sublime."
─Entertainment Weekly "You get a real feeling for what Laos was like in the '70s. The humor is wonderful, too."
─New York Post "The Dr. Siri books are by turns laugh-out-loud funny, sobering, convoluted, historical and endlessly entertaining . . . This series will have you reading (and laughing) well after most people in your household are sound asleep."
--BookPage, Top Pick "Along with a mystery that boils over into an international incident, Cotterill gives readers a wonderful re-creation of the 1980 Moscow Olympic Village and the preparations for the Games themselves."
--Booklist, Starred Review "Cotterill's twisty mystery plot will entertain readers while his cast of eccentric characters charms."
--Shelf-Awareness "Cotterill excels in the portrayal of potentially serious and momentous topics with lighthearted humor, imbuing his characters with grace and empathy."
--BookPage, Top Pick in Mystery "Stunning . . . This series offers unfailingly satisfying reading . . . bursting with caustic wit and adventurous spirit."
--Booklist, Starred Review "Crackles with humor and overflows with eccentric characters. Droll chapter titles add an extra soupcon of mirth."
--Kirkus Reviews

The 1980 Olympic Games in Moscow is already rife with controversy, but when a Lao athlete is accused of murder, it escalates into a full blown international incident. In the twelfth entry to the series, Dr. Siri Paiboun and his quirky team of misfits are on the case in a city and country foreign to them, yet familiar in its corruption of justice.
See all Product description

Ankh
5.0 out of 5 stars Brilliant
Reviewed in Australia on 29 June 2019
Format: Kindle EditionVerified Purchase
I love these books. The characters are hilarious, naughty and brave. The author has created an incredible cast set in an improbable time and location in Laos and it works beautifully.
Read more
Helpful
Comment Report abuse

Greg Dunn
5.0 out of 5 stars A delightful addition to the series which takes it further than ever before
Reviewed in the United Kingdom on 25 January 2019
Verified Purchase
This latest interlude, which sees Dr Siri very cheekily inveigle his way onto the modest Lao Olympic team for the Moscow Games in 1980 as the competitors' doctor (taking his wife and Dtui along with him, of course, and joined by Civilai), breaks new ground for the series in more ways than one.

Firstly, it takes the action and places it further afield than it's ever been before. Despite the title, this caught me off-guard, as I wasn't expecting an Olympic Games connection at all. It then excited me for being somewhat familiar with Moscow myself. I was initially a little disappointed that more wasn't made of the setting until I rationalised that the book wasn't there to serve my interests alone, quite apart from which the scope of the plot and therefore its locations take in only as much as they need to. That, and the whole thing is so deftly and charmingly handled once again.

Secondly, while the mysteries presented in the novels have often taken Dr Siri & co. outside of Vientiane and indeed outside of Laos (credulity-stretchingly too often, arguably), I don't recall there being a previous book in the series that inverts the normal cause-and-effect approach of a crime being committed and then being investigated. Here events revolve around the team - including Phosy, who has his work cut out for him covering the Vientiane threads of the plot - trying to solve a crime before it's been committed and attempting to pinpoint a killer before he's even killed. It's a very effective rejigging of the ordinary set-up, helped enormously by one of the least convoluted and most satisfying explanations for events. Sure, there's still a degree of hand-waving and moments where you need to suspend your disbelief, but there's no arguing that author Colin Cotterill doesn't cover all his bases within the narrative itself.

The regulars are all as well-drawn as ever, and this is a particularly good outing for Inspector Phosy, who to all intents and purposes has to survive on his own wits throughout. The greatest new introduction to the novel, and indeed the series, is the delightful Roger the Russian interpreter assigned to the Lao team. However improbable it might be that he has independently mastered the Lao language to absolute fluency, he makes a great addition to the team and I hope to see him again in future tales.

A lovely addition to the range then, which shows no signs after 12 novels of growing even the slightest bit stale. None of them has been sub-par, but this one in particular left me with the same happy glow the characters feel after their first-hand Olympic experience. Bring on the next round of fun and games!

C. E. Stewart
5.0 out of 5 stars and I loved how Siri managed to wangle himself onto the support ...
Reviewed in the United Kingdom on 21 September 2017
Verified Purchase
I don't buy hardbacks as a rule, I wait till the paperback comes out, but having devoured all the previous Dr Siri books I just couldn't wait to read about his next escapade and this one follows right on from 'I Shot the Buddha'.
All the characters are back in another sleuthing adventure, this time in Moscow for the 1980 Olympics, and I loved how Siri managed to wangle himself onto the support team. Now we have comparisons between the Lao form of socialism and the Soviet way. As in the previous books there are lots of descriptions of life in Laos, all related with humour and affection - you have to laugh at the system (or rather lack of system) at the airport. I think the author has managed to capture the feelings of sheer awe and excitement of the Lao as they experience 'western' living for the first time.
As usual, there are lots of laugh out loud bits, great characters (my personal favourite, Auntie Bpoo, makes another unhelpful appearance) funny turns of phrase and even the chapter titles are clever and witty. I don't think you can read any of the books in this series and not form an affection for the main characters and the country.
Best line: "Siri, there are times I believe you see yourself as the main character in an international mystery series" she said...

Lagoon
5.0 out of 5 stars Siri and the gang have a ball in Moscow
Reviewed in the United Kingdom on 2 October 2017
Format: Kindle EditionVerified Purchase
The Rat Catchers’ Olympics sees a welcome return to form for the wonderful Dr Siri and his merry band. It is 1980 and the Olympics are taking place in Moscow. Never one to miss a trick,Siri manages to finagle a place on the Laos Olympic delegation and soon finds himself knee deep in duplicity and gunfire. The violence is never over played and the pleasure is to be had by the interaction and dialogue among Cotterill’s stable of characters including a dead phsycic and a dying monk. The denouement with the three competing rat catchers is an absolute delight and is just one of many moments to be savoured from this latest offering in the Dr Siri Paiboun series. A gentle read but not one that strays into cosy territory.
Read more
Helpful
Report abuse

D. Francis
5.0 out of 5 stars Very amusing and interesting
Reviewed in the United Kingdom on 22 September 2018
Format: Kindle EditionVerified Purchase
“What did you use this product for?” is what Amazon wants to know about a book they want me to review!

I really enjoyed this Siri novel. It’s set in a different country in a real life setting - the Moscow Olympics - and is typically hilarious and interesting. And there really is a rat-catchers’ competition! Dr Siri has most of his team around him and an interesting mystery to solve with a twist towards the end.

I’ve loved these novels ever since my sister put me on to the first one and I’ve become fascinated with the history of Laos and Thailand.

John
5.0 out of 5 stars Brilliant, just brilliant
Reviewed in the United Kingdom on 11 December 2018
Format: Kindle EditionVerified Purchase
One of the best in the series. Few authors write with such humour, compassion and silliness. A joy to read. I ration myself as I want one in reserve for an emergency.
Read more
Helpful
Report abuse
Load more international reviews

Florabunda
5.0 out of 5 stars Hope the author writes more.
Reviewed in the United Kingdom on 9 January 2018
Verified Purchase
This whole series is a delight. If you are new to Dr. Siri, don't read this first, buy them all! A mixture of Laotian 70's communism, murder and spirits good and bad. Irresistible.
Read more
Helpful
Report abuse

the critic
5.0 out of 5 stars Five Stars
Reviewed in the United Kingdom on 19 September 2017
Format: Kindle EditionVerified Purchase
An excellent read in the tradition of Colin Cotterill books.
Read more
Helpful
Report abuse

chagal4
5.0 out of 5 stars Love the Title, Buy the Book
Reviewed in Canada on 25 September 2017
Format: Kindle EditionVerified Purchase
I wait…often impatiently for Colin Cotterill to summon the energy and wry demons needed to bring Siri and his gang to life. I am almost always depressed for days when I've finished one these lovely books. I'm seventy five…looking down the crooked road of old age and seeing legs that won't run…eyes that won't see…ears that don't hear…and a mind that ticks over like an asthmatic motor from a forty nine Ford. Siri restores my faith…gives strength to my legs, eyes and ears. The gentle humour and clever sidesteps of the plot keep the book moving…but it is the humanity of the characters and I must believe, the writer that restores. Of course it's a diversion. But in the past thirty years and especially in the last four or five years…we've never needed diversions more.
Read more
One person found this helpful
Helpful
Report abuse

Mira
5.0 out of 5 stars Very nice intricate plot
Reviewed in Germany on 1 March 2019
Format: Kindle EditionVerified Purchase
The novel takes you to the Olympics in Moscow - it's so colorfully described that it could be a historical novel, it really takes you there. The characters are as fun as ever and one falls even more in love with them. And the plot is very complicated but still believably woven (well, sometimes it has a little too many lucky accidental happenings or circumstances, but everything is so much fun that I was able to ignore it)
Read more
Helpful
Report abuse