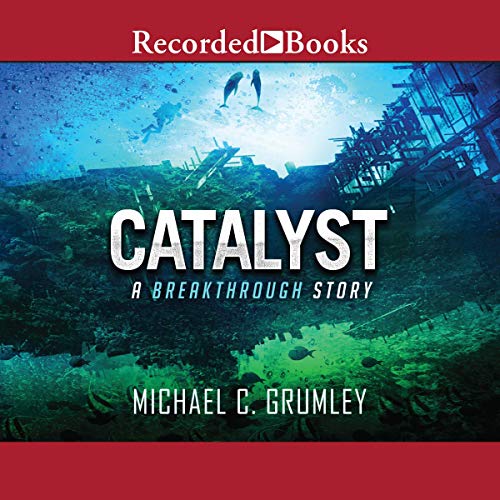 In 1984, a doomsday vault was constructed on a remote island in the Arctic Ocean. Its purpose was to preserve Earth's genetic history in the event of a global catastrophe. Now, decades later, a second vault has been uncovered, this one resting where no one ever expected. And the problem is it's not ours.

Yet even more curious than the vault itself is what lies inside. Seeds. Millions of seeds. Each with a genetic embryo untouched and perfectly preserved. Waiting.

No one knows who built it. Or when. What we have managed to figure out is that whoever it was traveled an immense distance. For the sole purpose of hiding their genetic blueprints on Earth. But why?

Now, a small group of marine biologists and navy investigators have been assigned to find out. Before anyone else does. But Alison Shaw and John Clay are not prepared for what they are about to uncover. Beginning with the truth behind our own evolution.

4.6 out of 5 stars
4.6 out of 5
2,331 global ratings
How are ratings calculated?
To calculate the overall star rating and percentage breakdown by star, we don’t use a simple average. Instead, our system considers things like how recent a review is and if the reviewer bought the item on Amazon. It also analyses reviews to verify trustworthiness.

MJP
4.0 out of 5 stars Another great story in the series
Reviewed in Australia on 1 January 2018
Verified Purchase
This is the third in the Breakthrough series. I have enjoyed each of these books. There is lots of action with many twists and turns. I would suggest that the books be read in order and definitely not to read this one before reading Leap. I look forward to reading more
Read more
Helpful
Report abuse

Alan Uden
5.0 out of 5 stars Another Terrific book in this Series!
Reviewed in Australia on 17 June 2016
Verified Purchase
This book will not disappoint anyone who likes a good plot with a few Twists & surprises.
Once again I cannot praise the author enough for the attention to detail & the smooth flow of events.
A Must read until it's finished publication.

Tessa
TOP 100 REVIEWER
4.0 out of 5 stars Not my cup of tea.
Reviewed in Australia on 28 February 2016
Verified Purchase
I am sure that this is an excellent book but I just couldn't get into it. What I read was well written and well edited. It just isn't a genre that I am interested in.
Why have I given it 4 stars? Because what I did read was good and it wouldn't be fair to give it less just because it's not my cup of tea !
Read more
Helpful
Report abuse

Jennifer Reeves
5.0 out of 5 stars Fast moving, exciting read.
Reviewed in Australia on 10 September 2016
Verified Purchase
This third book in the "Breakthrough" series is compelling from the very start. The major plot explodes into three arenas across the world...each filled with action, excitement and surprises! A must read!
Read more
Helpful
Report abuse

Stella Buley
4.0 out of 5 stars Good series
Reviewed in Australia on 1 February 2017
Verified Purchase
Another great instalment in the series. Looking forward to next instalment.
Read more
Helpful
Report abuse

Amazon Customer
5.0 out of 5 stars Five Stars
Reviewed in Australia on 1 April 2016
Verified Purchase
Great read! Had me in from the beginning of book 1! Now I can't wait for the 4th!
Read more
Helpful
Report abuse

Amazon Customer
5.0 out of 5 stars a story worth devouring.
Reviewed in Australia on 10 December 2015
Verified Purchase
Great book and great story. All I can ask is...... More please???!!!!
Read more
Helpful
Report abuse
See all reviews

Capfka
5.0 out of 5 stars Book 3 in a great series
Reviewed in the United Kingdom on 3 August 2021
Verified Purchase
I've "owned" copies of the first three books in the Breakthrough for some time, but have only just got around to reading them, and I'm wild at myself for not having bothered before!

This edition has (basically) the same characters as in the first two books, but this book can be read by itself and it will work for you. Great geo-political plot involving humans, dolphins and one cute gorilla. Lots of violence, but not gruesomely described.

In this book, American, Brazilian and Chinese operatives are trying to secure control of a chemical which is the "elixir of life" which was deposited by aliens thousands of years ago. Michael Grumley has again developed a convoluted plot which keeps you turning the pages to find out what happens next, and that usually doesn't turn out to be the obvious outcome.

Yes, it's all highly unlikely, but it's very, very readable. I strongly recommend it to you if you enjoy such things!
Read more
Report abuse

Mazza
4.0 out of 5 stars Good sci-fi thriller, but without a satisfying conclusion.
Reviewed in the United Kingdom on 28 March 2016
Verified Purchase
On the whole I enjoyed this book and was aware from other reviews that it could be read stand alone. (there are 2 books in the series before it). The storyline and characters were good and you were kept interested as you went along. However, I was disappointed in the ending as not all loose ends were tied up. This is because there is to be a following book in the series, but the trouble is, the author hasn't written it yet! I am not sure I would have read it, had I known there wasn't a cleared up conclusion.
Read more
6 people found this helpful
Report abuse

Stan
4.0 out of 5 stars Complicated but compelling
Reviewed in the United Kingdom on 10 April 2016
Verified Purchase
This is book 3 of a series, but largely stands alone despite a lot of the plot depending on what happened before. A mix of sci-fi and action thriller, the pace is steady and the action zigzags between groups and countries. One irritant in the Kindle adaptation is that you are following the storyline of one group when, in the very next line, you leap to another. A few line breaks would help!
Overall though, the sci-fi holds up - talking to dolphins and gorillas does not seen farfetched and miracle cures do come out of the forests. The action is rather less so, the gunfights seem contrived and the near-to-end Chinese action very unlikely (read it and see!).
Good enough though to go back in time and read the earlier volumes to see how they got to the start of this one.
Read more
2 people found this helpful
Report abuse

Lesley Hayes
5.0 out of 5 stars Brilliant and enlightening. Thoroughly recommend.
Reviewed in the United Kingdom on 15 September 2016
Verified Purchase
I absolutely loved this, and it didn't matter that I came into the story three books in, as the back story was revealed enough to fill in those missing details. The premise of the story is extraordinary, with all the elements that keep the imagination curious and excited about what we don't know and what we don't know that we don't know! The themes relating to communication between species and the possibility of expanding evolution and potential for healing are ones that really interest me. The writing is superb and the action just keeps on unrolling. I couldn't put it down, and I really hand it to the author for his skill in characterization and his ability to switch from one scene to another just enough to keep the pot boiling and not lose the different threads. He must have done a huge amount of research for this novel, and although I am keen to read the next book in the series, I wasn't in any way left feeling disappointed in the ending. Not so much a cliff-hanger as a realistic pointer towards another whole story waiting to unfold. Excellent entertainment, and would make a great movie.
Read more
Report abuse

Mr B Holloway
5.0 out of 5 stars Another great read.
Reviewed in the United Kingdom on 20 August 2016
Verified Purchase
Another great book from Michael Grumley. I have really enjoyed the series and look forward to the next one. I feel that they all need to be read in order to fully enjoy the story as it unfolds. This book follows on so seamlessly from the previous book and takes you on another roller coaster ride and plenty of action. The ending is clearly not the ending of the story as a whole and leaves you wanting more but it ends this chapter off very well.
Read more
One person found this helpful
Report abuse
See all reviews
Back to top
Get to Know Us
Make Money with Us
Let Us Help You
And don't forget:
© 1996-2021, Amazon.com, Inc. or its affiliates