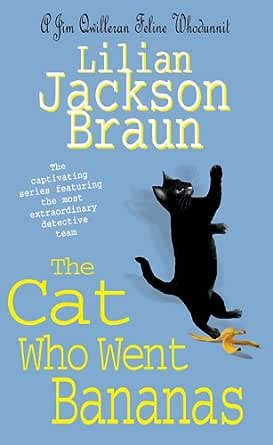 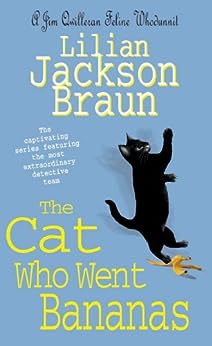 The Cat Who Went Bananas (The Cat Who… Mysteries, Book 27): A quirky feline mystery for cat lovers everywhere (The Cat Who...) Kindle Edition

"Lilian Jackson Braun keeps both paws planted on the side of charming." --This text refers to an alternate kindle_edition edition.

Lilian Jackson Braun composed her first poem at the age of two. She began writing her Cat Who... detective series when one of her own Siamese cats mysteriously fell to its death from her apartment block. Since then over twenty Cat Who... novels have been published, all featuring the very talented Koko and Yum Yum, Siamese cats with a bent for detection. She and her husband, Earl, live in the mountains of North Carolina. --This text refers to an out of print or unavailable edition of this title.

mrsvee
4.0 out of 5 stars Just when I was beginning to like this author.
Reviewed in Australia on 13 February 2017
Verified Purchase
I was becoming to like Mr Q and the Siamese cats, Koko and Yum Yum, then on Page the last, which was right at the bottom.....that's it. The end. Finis. Finite. (Now I am going to swear). Bloody hell!
Read more
Helpful
Comment Report abuse
See all reviews

J. Osborne
4.0 out of 5 stars Ending a little abrupt
Reviewed in the United Kingdom on 15 May 2019
Verified Purchase
Loved the storyline and the writing is, as always, excellent. However, am only able to give 4 stars for this particular book as the ending seemed to leave at least one aspect unexplained, and almost felt a little rushed. Not a major fault, but do not feel able to award the 5 stars I have given to every other book in this series.
Read more
Report abuse

A B S
5.0 out of 5 stars Keeps you involved in interest from start
Reviewed in the United Kingdom on 21 April 2018
Verified Purchase
From the very first page there's a pleasant read, and the story evolves from there as all of Lillian Jackson Braun' s books are all written in such a interest from the start. She keeps your interest by her use of such knowledge that is dropped into this man's conversation through out each story. This book is no different, written with such skill. I've enjoyed each one of her stories equally.
Classic books.

Sharon Elson
4.0 out of 5 stars Koko senses bad vibes and causes a real villain to slip up
Reviewed in the United Kingdom on 28 November 2018
Verified Purchase
I really like these stories about Koko and Yum yum and their servant James Qwilleran. Over the years I've been introduced to the good town of Pickaxe and the whole of Moose County. However, there's a dark side and Mr Q with the help of his smart cat Koko solves the case.
Read more
Report abuse

SpookyRex
3.0 out of 5 stars Where was the ending??
Reviewed in the United Kingdom on 21 January 2019
Verified Purchase
I am normally a fan of the Cat Who stories but this one left me baffled. It ended abruptly with no tying up of loose ends and no real conclusion. Very disappointing.
Read more
Report abuse

clayfeetmartyr
4.0 out of 5 stars Another great yarn
Reviewed in the United Kingdom on 17 November 2019
Verified Purchase
Another wonderful outing for Koko Yum Yum and Mr Q
Read more
Report abuse
See all reviews
Get FREE delivery with Amazon Prime
Prime members enjoy FREE Delivery and exclusive access to movies, TV shows, music, Kindle e-books, Twitch Prime, and more.
> Get Started
Back to top
Get to Know Us
Make Money with Us
Let Us Help You
And don't forget:
© 1996-2020, Amazon.com, Inc. or its affiliates