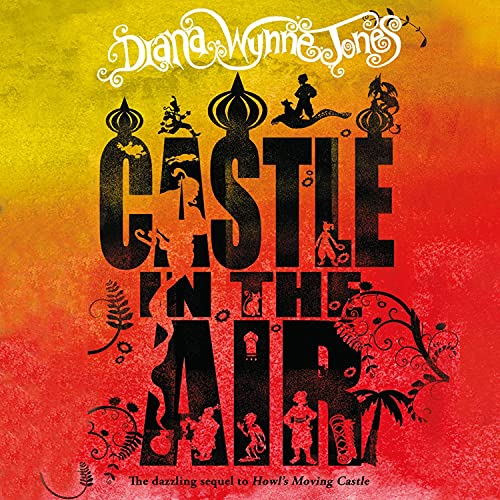 Castle in the Air

4.7 out of 5 stars
4.7 out of 5
1,786 global ratings
How are ratings calculated?
To calculate the overall star rating and percentage breakdown by star, we don’t use a simple average. Instead, our system considers things like how recent a review is and if the reviewer bought the item on Amazon. It also analyses reviews to verify trustworthiness.

Sue
5.0 out of 5 stars Castle in the air
Reviewed in Australia on 18 February 2020
Verified Purchase
At first I wasn’t going to continue reading because I loved the characters in the first so much and this story is not about about them however I enjoyed the writing style so much I thought I would give it a go.
No regrets, I really enjoyed this book
Read more
Helpful
Report abuse

bluevapo
5.0 out of 5 stars Definitely a keeper.
Reviewed in Australia on 19 May 2021
Verified Purchase
Although this is a sequel to Howl's Moving Castle, you don't really need to have read the first in order to enjoy this one, any more than you need the first two to enjoy the third. These are all books that need to be read several times, because you miss bits the first time through.
Read more
Helpful
Report abuse
See all reviews

Interested Person
5.0 out of 5 stars A lot of silly fun
Reviewed in the United Kingdom on 4 October 2020
Verified Purchase
This was my first experience of Diana Wynne Jones, having seen How's moving castle but not read it. I went in with no expectations. I came out with a slightly embarrassed grin having had a very silly and very fun romp though this charmingly mad story.

The first half of the book is reasonably sane, with stories of genies and magic carpets and princesses told with wry humour. The second half goes mad, bringing back all the favourite characters and tying up loose ends in a rather absurd way.

I can't say whether this is a good example of the author's work. If it is, then I won't make it through very many books but I'll be glad to have read some. Humerus fantasy is hard to do right, and this is. If you think you might want to read it, you do!
Read more
One person found this helpful
Report abuse

Rotgut
5.0 out of 5 stars Light As Air
Reviewed in the United Kingdom on 25 October 2014
Verified Purchase
Great sequel to "Howl's Moving Castle".

Unusually for a sequel, especially a fantasy novel following on from a previous volume, initially, the story, characters and even the setting have little (or, apparently, nothing) in common with the earlier work. Instead of the faux-medieval land of Ingary, with Walled Cities, Kings and Witches, Hat shops and Bakeries we have an Arabian Nights type Eastern setting with Deserts, Bazaars and Djinn. But with the magic of Diana Wynne Jones firmly still in place, "Castle in the Air" is every bit as entertaining and involving as its predecessor.

Abdullah, our carpet seller hero, is a funny and worthy character. His adventures in land of Raspuht are fast moving and action -packed. It's almost a shame when (about half way through) we leave the the city of Zanzib without quite tying up all loose ends and the scene shifts to Ingary.

The later parts of the book do allow DWJ to revisit the characters from "Howl's Moving Castle"..a book which ended rather frenetically.. and show the fate of the various heroes and heroines. This time out, more lengthy closing scenes give a chance to properly establish what happens to everyone.

Funny and perfectly plotted and paced, this adventure of young wizards and witches is, for my money, far superior to the rather more clunky "Potter" books.
Read more
8 people found this helpful
Report abuse

Nai Stark
3.0 out of 5 stars Good read if you’re not fat
Reviewed in the United Kingdom on 1 March 2021
Verified Purchase
I was enjoying this book - until the fat shaming. Then I continued to read for an hour or so, but I couldn’t stand the main character enough to care after being fat shamed.
Read more
2 people found this helpful
Report abuse

Natalie Dunn
4.0 out of 5 stars Good, but not as good as the first!
Reviewed in the United Kingdom on 2 May 2015
Verified Purchase
Thoroughly enjoyable, kept me guessing just where the characters from the first will show up. I did manage to guess correctly for some of them but others surprised me. I missed the original characters not being the ones we follow as I loved them so much, but it was also interesting to see the relationship between the original characters from someone else's point of view. However it doesn't have the same humour as the first or the same inventiveness. But enjoyable just the same. Overall it was good but as is often the case it is not as good as the original.
Read more
One person found this helpful
Report abuse

Kindle Customer
5.0 out of 5 stars Wonderful
Reviewed in the United Kingdom on 16 September 2020
Verified Purchase
How's moving castle was always one of my favourites but I confess I have never read the sequel. I'm glad I have as its just as wonderful and just as silly
Read more
Report abuse
See all reviews
Back to top
Get to Know Us
Make Money with Us
Let Us Help You
And don't forget:
© 1996-2021, Amazon.com, Inc. or its affiliates