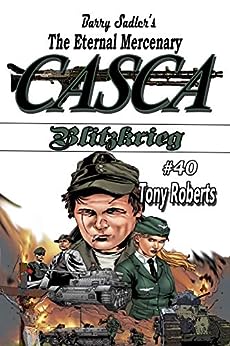 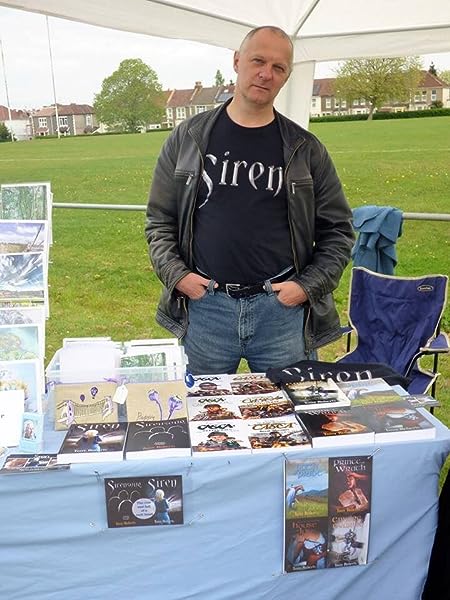 by Tony Roberts (Author) Format: Kindle Edition
See all formats and editions
Sorry, there was a problem loading this page. Try again.
War looms in Europe, and Casca finds himself the target of a German police investigation into the death of a Spanish national in a Berlin hotel. To escape discovery, the Eternal Mercenary joins the new panzer corps and soon finds himself teaming up with a giant of a man called Gustaf Beidemann.

As war breaks out, Casca, Gustaf and the rest of his crew are plunged into a vicious campaign that takes them through Poland. All this time, unbeknown to Casca, the police are closing in on him, thanks to the efforts of one man, Erich Farben. Farben’s progress is stalled when war with the West begins, and Casca, Gus and his friends rampage through Belgium and become embroiled in the biggest tank battle of the war so far against the best that France can send into the field.

Just when it seems Farben has got his hands on his quarry, a guardian angel, connected to Casca’s long, distant past, appears out of nowhere, intending to save the Eternal Mercenary from spending years in a Nazi prison.

I live in Bristol with my partner Jane and a mad cat called Cassia. I have always written stories and have practiced my craft, as the writer of the Casca stories (www.casca.net), the Kastania series (www.tonyrobertsauthor.com) the fantasy series Dark Blade and now the Siren series which is about a 1980s rock band. I am very interested in history, and this forms an important backbone to my Casca writing, and also fantasy and rock music which forms the foundation to my other series.

I owe my fascination with the character of Casca to my mother, who bought home a second hand book, number 3, as a gift for me in 1986. I loved the premise of the story, the fast paced action and was hooked; I wanted to know more. It took me 13 years to collect the set of 22 books, which was difficult in the days before the internet. As my collection finally came together I heard of original writer Barry Sadler's death. I set up a website devoted to Casca in 2001 and was asked to become the new writer in 2005. Since then I have had 20 books published.

I shall continue to write two books a year in the Casca series. These books are available on www.amazon.com and www.amazon.co.uk as well as my own website.

I have self published a series of medieval fantasy stories, which I have called The Kastania Series. They are available on the Amazon sites. More information about the series and artists impressions of the landscapes are available at www.tonyrobertsauthor.com and facebook. The Kastania series is essentially the story of one family, the Koros, and how they deal with the problems and challenges of running the empire from the moment they seize power. The stories will follow the family through the years and is going to be a dynastic epic.

Copies of all are available in paperback or ebook formats. The next instalment, Throne of Envy, takes the story of the empire forward and will be available in the summer of 2017.

Another fantasy series, but not so much an epic as about a single person, a half-human, half-elf girl called Faerowyn who sets off on her 16th birthday to discover her heritage left her by her long-vanished father who is one of the heirs to the throne of the dark elves. she must discover herself and her powers as she follows her quest, and deal with all kinds of dangers and enemies who want to stop her for their own reasons. I have written two stories to date and the third, Okra's Tower, is due out in late 2017.

A shy, bullied and allergic-ridden girl seems to have no hope in achieving her dream of becoming a rock star, but on her 15th birthday a huge chance incident falls her way and it triggers off the possibility of realising her ambitions. Siren follows her latter school days and the formation of the band and their initial foray into the world of music. Sirensong picks up 4 years later and charts the slow unravelling of the band throughout the latter 80s as drink, drugs, touring pressures and artistic differences all contribute to the tension.

I also have co-written songs to go with the books which you can listen to on my website www.tonyrobertsauthor.com

PapaBrian_inWV
4.0 out of 5 stars Another Well Crafted Chapter in the Saga
Reviewed in the United States on 6 May 2016
Verified Purchase
I was fully immersed in the story-telling and felt that the saga was well-served by this chapter. I think the only quibble I have is that I am pretty sure they speak Flemish in Belgium, not French. Similar, yes, but not the same.
Read more
One person found this helpful
Report abuse

Mel
2.0 out of 5 stars Casca 40
Reviewed in the United States on 15 June 2014
Verified Purchase
Tony i think missed the mark on this one. I have all 40 of the Casca books and this one has very little of the saga in it.Tony has in the past kept up the Casca saga but this book did not have it.
Read more
4 people found this helpful
Report abuse

Polycarp
4.0 out of 5 stars Great Twist of Fate
Reviewed in the United States on 7 October 2014
Verified Purchase
Another great story from Tony. Also included is a great twist of fate from ages past if you read the books in order.
Read more
2 people found this helpful
Report abuse

Diane M. Ramirez
5.0 out of 5 stars Five Stars
Reviewed in the United States on 31 October 2014
Verified Purchase
loved it and you will too!. Don't miss it.
Read more
One person found this helpful
Report abuse
See all reviews
Report an issue
Does this item contain inappropriate content?
Report
Do you believe that this item violates a copyright?
Report
Does this item contain quality or formatting issues?
Report