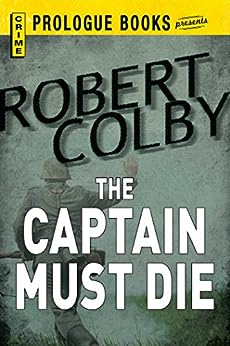 They weren’t going to kill him right away. First there would be only little things, irritating things, that would build and grow and tighten until Captain Driscoll became afraid. Then they’d begin their reign of terror. That would be the best part. The three revenge-hungry men would savor those moments like a good wine.

And when Captain Driscoll was a broken, sobbing man, when his sanity was almost gone, they would murder him.
Read more
Previous page
Next page

3.5 out of 5 stars
3.5 out of 5
13 global ratings
How are ratings calculated?
To calculate the overall star rating and percentage breakdown by star, we don’t use a simple average. Instead, our system considers things like how recent a review is and if the reviewer bought the item on Amazon. It also analyses reviews to verify trustworthiness.

Amazon Customer
4.0 out of 5 stars Hardboiled Heaven
Reviewed in the United Kingdom on 5 May 2012
Verified Purchase
I have never heard of Robert Colby. I like hardboiled/noir fiction, from the 1940's
50's 60's authors like Ross Macdonald, David Goodis, and some of the other million selling Gold Medal writers that were published and still available by various paperback publishers now. Hardcase Crime still bring a lot of these writers to today's readers.

Now in ebook form Prologue Books are also publishing some of these long lost gems, Robert Colby among them. I am happy to have discovered this writer of The Captain Must Die which is said to be one of the best in the hardboiled tradition, in my humble opinion, it is, a tale of revenge told in a tough no-nonsense style, and is right up there with some of the other hardboiled classics. At a bargain basement price too! Brilliant! Would like to have given five stars, but there were a few typo's here and there but not enough to ruin a gripping read.If you like your fiction hardboiled and noirish give Robert Colby a go.

PianoNut
4.0 out of 5 stars good read, tons of typos
Reviewed in the United Kingdom on 6 June 2012
Verified Purchase
I enjoyed the story, though it's obvious how it's going to end by how the author fleshes out the characters as the novel draws to a close. And Driscoll, the Captain of the title is not particularly likeable. I was rooting for the bad guys for most of the story. It's a goood short read that is spoiled by the huge amount of typo's and sentences that make no sense. I hope this is not the same story for other Prologue books as they have a lot of similar hard boiled fiction from the 50's. The book deserves a better treatment than it received from Prologue.
Read more
One person found this helpful
Report abuse

Ray Garraty
4.0 out of 5 stars nice Gold Medal novel
Reviewed in the United States on 14 August 2013
Verified Purchase
hree former soldiers, 12 years after the war, return to town in Louisiana, where their former captain lives with his wife. The soldiers are looking forward to the meeting with Captain Driscoll, but not because they want to thank him for his good command. All three, on the contrary, are covered by hate and want to brutally kill the captain. Now Driscoll is a successful businessman, a father, a respectable and prosperous man, with still an attractive wife. Three soldiers do not just want to kill Driscoll, it would be too easy, but first, to scare him, knocking him from a measured pace of life, then take his woman, and then take all the money the captain, managed to save over 12 years of life and now he keeps them in a safe with the code. Brick, an organizer of a plan of revenge, is most eager to send a captain to hell - as retribution for a case during the war, for one incident, which nearly put an end to the lives of three ex-GIs.

Colby immediately initiates us into the plans of three, but not immediately lays out the truth about what happened 12 years ago. On the other hand Colby gives each character to speak. Everyone has their secrets, everyone has their attitude to the incident from the past, and each has its own plans for the future. Brick, fierce and angry man, suffered the loss of the family. Playboy Cal lost revenue work. Stupid Barney missed waiting with his bride.

I will not reveal a big secret when I say that all these 12 years, Brick, Barney and Cal spent in prison. But it is strange that Colby does not mention how prison term affected the three companions. Colby wrote that they were waiting for retribution and hoarded malice and hatred all the time, but the prison experience and the impact of prison on them - not a word about it, as if all these 12 years former soldiers were just waiting on the bench and not behind bars.

Colby is a little too simple, but he very skillfully creates an atmosphere of growing tension. Moreover, the author succeeds in achieving the effect where we stand on the side of the soldiers at the beginning of the novel. The positive hero is to be captain, but Colby uses in describing him such words and phrases that show the captain in an unfavorable light, as if he were the last bastard, making money on the failure of others. Three real bastards that are greedy for money and the flesh of women are the obvious anti-heroes, but before Colby reveals the secrets of the past, we are on the side of the inmates and ex-soldiers.

«The Captain Must Die» is written by all the canons of the genre, but it delivers the goods on all fronts.
Read more
One person found this helpful
Report abuse

Chris
4.0 out of 5 stars Hard-boiled revenge at its finest
Reviewed in the United States on 27 April 2014
Verified Purchase
Greg Driscoll is a wealthy and respected businessman in the suburbs of Louisville, Kentucky. He has two cars, an upscale suburban home, a ten-year-old son off at summer camp, and a cold, distant, but beautiful wife Madge. And somebody is trying to kill him: three ex-G.I.s recently released from Leavenworth with a score to settle. They know Driscoll’s been stockpiling money in a vault built into his house’s basement. They aim to take that money and his wife, make Driscoll suffer for what he’s done to them, break him down through harassment and terror… and then end his life. And step by step, their careful plans begin to fray at Driscoll’s nerves; they may even be successful, if they can trust each other long enough to pull it off…

The story unveils itself through a series of flashbacks; at first, you’re left guessing why these three killers are gunning for Driscoll, but as their complex relationship comes out the reader starts to fit the pieces together…

During the war, Brick, Cal, and Barney were stateside to use their battlefield experience to help train new recruits. After a promised thirty-day furlough was revoked and the three G.I.s ordered back to the front, a disgusted Brick incites a desertion. When caught and brought before their commanding officer, Driscoll, the captain had the opportunity to drop the charge and shuffle them aboard a troopship heading back into the Pacific Theater. Instead, he had them tried as deserters—justifying to himself that the court would decide their guilt; in reality, it’s vengeance against Cal Morgan for having an affair with Madge. The following twelve years in Leavenworth destroy the lives of the three privates—careers evaporate, girlfriends disappear—leaving them with bitterness and resentment directed at Driscoll.

These are all failed characters—eroded to the core by the loss and rejection each has felt since the war. Despite his wealth and success, Driscoll lives in fear of poverty and another banking collapse. He’s bitter about his wife drifting away from him ever since he locked away her lover, and struggles along knowing someone is gunning for him, refusing to seek aid for fear of being seen as less than a man. The ex-cons have lost everything—each thinks back to an idyllic pre-war life with a career heading upward and a loving girlfriend—and all that’s left is a devilish desire for vengeance. The attempted desertion was just the catalyst; the war is the cause for the crushing weight that keeps them down, their many burdensome disappointments.

The Captain Must Die is a forgotten masterpiece. It has its flaws—the fragmented nature makes for choppy reading, the flashbacks impeding the pace of the present narrative. (There’s also a few OCR errors in the e-copy, none bad enough to disrupt the reading experience.) But at its best, the prose shines, the dialogue is curt and sharp, the characters are rich in woe and motivation, and the plot arc is impressive. Robert Colby produced a well-executed novel of vengeance and lust with a distinct psychological element, and anyone with a serious interest in 1950s crime/noir should keep an eye out for this one. It’s an almost-perfect novel, and one of the most unique Gold Medals I’ve read.
Read more
Report abuse

Douglas J. Bassett
3.0 out of 5 stars Okay, but could've been much better
Reviewed in the United States on 4 May 2012
Verified Purchase
This is a much-ballyhooed pb original from the Golden Age. It's a smooth, professional job, as are most books from this era, but it doesn't match it's rep.

It's plot is very similar to John D Macdonald's earlier THE EXECUTIONERS, though it's hard to say to what extent Macdonald influenced Colby. (They seem to have been published a year apart.) A "man in the Grey Flannel Suit" type, by all outward appearances very dull and normal, actually has a dangerous secret in his past, and this dangerous secret is now out to come and bite him.

This is an interesting framework for a story, although neither book mentioned above really handles it that well. In both instances the bad guys are much more interesting than the good guy, and they don't shine any refracted light (ie, the good guy is not made more interesting by the fact that these bad guys want to kill him.) CAPTAIN also suffers from Colby's typical deaf-ear to psychology, with various characters turning around on a dime to act as the plot demands it. One might plead formula, but there were plenty of pb original writers who did much better with this.

Worst of all, the bad guys have something of a point, and the "good guy" is somewhat at fault here. While his position is certainly defensible, it's not simply defensible. Yet Colby never really gets into the psychology of all this, never really complicates his case in interesting ways. Again, you can plead formula, or the times, but there were certainly writers out there who were unashamedly writing out rather aberrant psychology, so it's not a position I really buy. It feels to me instead rather like Wouk's THE CAINE MUTINY, ie Colby saw where his story was truly headed and got chicken about it.

Not awful, and certain passages, particulary a sequence in which the bad guys are entertaining local whores, work very well. But a deeply overrated book, certainly second-tier.
Read more
6 people found this helpful
Report abuse
See all reviews
Back to top
Get to Know Us
Make Money with Us
Let Us Help You
And don't forget:
© 1996-2021, Amazon.com, Inc. or its affiliates