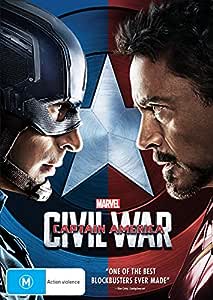 "Captain America: Civil War" picks up where "Avengers: Age of Ultron" left off, as Steve Rogers leads the new team of Avengers in their continued efforts to safeguard humanity. After another international incident involving the Avengers results in collateral damage, political pressure mounts to install a system of accountability and a governing body to determine when to enlist the services of the team. The new status quo fractures the Avengers while they try to protect the world from a new and nefarious villain.

Marvel’s 'Captain America: Civil War' finds Steve Rogers leading the newly formed team of Avengers in their continued efforts to safeguard humanity. But after another incident involving the Avengers results in collateral damage, political pressure mounts to install a system of accountability, headed by a governing body to oversee and direct the team.

The new status quo fractures the Avengers, resulting in two camps—one led by Steve Rogers and his desire for the Avengers to remain free to defend humanity without government interference, and the other following Tony Stark’s surprising decision to support government oversight and accountability.

John Green, NCGBT
TOP 1000 REVIEWER
5.0 out of 5 stars All Out War
6 December 2017
Format: Blu-ray
After the sloppy, undercooked mess that was Batman vs Superman: Dawn of Justice, Captain America: Civil War is a gourmet meal that’ll cleanse your palate and leave you wondering when the heck DC’s gonna get their act together. Put it this way: people are still divided about BvS. You either love it or hate it.

No one’s gonna be divided on this movie. It’s everything it needed to be.

It’s been said before and will always be said: the main reason the Marvel movies work is because the audience has had the time to become fully invested in the characters. CA: CW introduces two “new ones”- Black Panther and Spiderman- and you’re brought along for the ride with them. Buckle up.

***MINI-SPOILERS AHEAD***
You know the plot: a year after the destruction of Sokovia in Age of Ultron, the Avengers are viewed as running rampant across the globe. Many of the world governments come together to declare the Avengers are in dire need of supervision… or else. (FYI: this isn’t a new idea; in the comics the Avengers operated under the auspices of the US Government.) For reasons both pragmatic and personal, Stark agrees but along those same veins, Cap doesn’t. Both have valid arguments. As the UN ratifies the Sokovia Accords, a terrorist attack leaves many delegates dead, including the King of Wakanda. Bucky Barnes, the Winter Soldier, is identified as the prime suspect and the hunt for him begins. Bucky professes innocence to Cap, who supports his friend despite the pressure to bring him down and the lines are drawn.

There’s no real twists to this story; you can tell the whole time where it’s headed, but it’s a fun ride all the way. Even the prologue scene is framed so that if you didn’t intuit its significance right off the bat they still handed it to you on a platter almost immediately anyway.

The villian’s arc also helps to sell the story. F. Scott Fitzgerald once wrote: show me a hero, and I’ll write you a tragedy. The same hold true for the bad guys; it matters more when it’s personal and nothing’s gonna change their course. His entire history is inextricably linked to the whole- both the Avengers as well as Hydra- and makes for a good character arc in its own right.

The much anticipated big fight at the airport was pretty entertaining. Everyone got their moments to shine in the scene, even Spiderman and Antman making big contributions to the cause. Got a little choppy on the editing, but nothing too distracting. As for the climactic fight between Bucky, Cap and Shellhead, it was satisfying both emotionally and visually, a dynamo of action and drama that brought the plot full circle.

Not that there aren’t a few warts here. The inciting incident at the beginning was clumsy and kinda dumb; I had a hard time believing anyone, even a rookie like Scarlet Witch, could’ve made a mistake like hurling an explosive device INTO an occupied area, especially when if you let it explode in the air- where it already was- you’d have been fine. But plotwise that was simply the icing on the cake anyway.

I thought T’Challa/Black Panther’s intro could’ve been built up a little more but they did a fine job of his development and juxtaposing him as an almost literal anti-Stark character: similar resources yet different personalities and motives.

The Peter Parker/Spiderman intro scene needed more explaining as to how Tony found him but you can roll with it. Spiderman was everything he should be- an anxious kid in way over his head yet eager to prove himself to the adults, and talking too much the whole time to cover up his nervousness. An excellent addition to the movie.

On a side note the Agent Carter story arc is also wrapped up, and given the ambiguous state of the tv show, it doesn’t look like a good sign.

CA: CW is a great comic book movie and fantastically entertaining. This is one you really need to see, not only for continuity but for the fun of it.

One question: how’s Tony calling Spidey ‘Underoos’ when in this world there weren’t any superheroes to make Underoos from…? lol