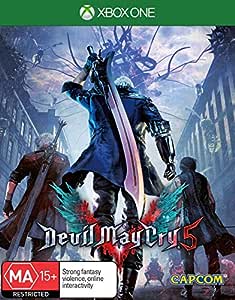 10 years since the last iteration, Devil May Cry IV, Director Hideaki Itsuno and the core team have reunited to conclude the long awaited Sons of Sparda saga. Several years have passed in Devil May Cry V and the threat of demonic power, long since forgotten, has returned to menace the world once again. The demonic invasion begins with the seeds of a "demon tree" taking root in Red Grave City. This hellish incursion attracts the attention of the young demon hunter, Nero, an ally of Dante who now finds himself without his demonic arm, the source of much of his power. As Nero heads to Red Grave City in his motorhome named "Devil May Cry" with his partner Nico, he ruminates on how everything started. The loss of his demonic arm, the demonic invasion, and Dante's unknown whereabouts. Things must be settled once and for all. Capcom's proprietary in-house RE Engine ensures that with Devil May Cry V, the series continues to achieve new heights in fidelity, featuring ground-breaking graphics that utilise photorealistic character designs and stunning lighting and environmental effects. It features three playable characters, each of which offer a radically different combat play style as they take on the city overrun with demons. Adrenaline-fuelled boss fights play out against destructible environments in the striking streets of Red Grave City.

SamboNZ
TOP 500 REVIEWER
4.0 out of 5 stars Perfectly crafted 'Sekiro Lite' and loving it.
23 March 2019
Verified Purchase
Whether you've played any DMC titles in the past or not, you owe it to yourself to experience at least one entry in this Capcom series, and it absolutely might as well be this one.
Containing all the classic hallmarks of the franchise (such as over the top cinematics, corny one-liners, grotesque monster enemies, creative flowing combat, characters that you hate to love ) it is presented using the incredible RE2 Engine - the very same one used in Capcom's Resident Evil 2 Remaster.
Addictive, flawlessly presented, and infinitely replayable, it's a worthy purchase for those of us who don't possess the willpower nor resolve to battle through a 'souls' game (such as the recently released Sekiro).
Try it - you won't be disappointed as you're sucked in from the get-go. Recommended!

Read more
One person found this helpful
Helpful
Comment Report abuse
See all 1 customer reviews
Write a customer review
Get FREE delivery with Amazon Prime
Prime members enjoy FREE Delivery and exclusive access to movies, TV shows, music, Kindle e-books, Twitch Prime, and more.
> Get Started
Back to top
Get to Know Us
Make Money with Us
Let Us Help You
And don't forget:
© 1996-2020, Amazon.com, Inc. or its affiliates